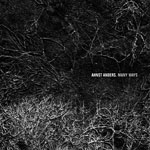 Ahnst Anders has been lurking on the periphery of the ‘rhythm n’ noise’ scene for a while. His work represents the more reflective, introspective side of the Maschinenfest ‘style’. It has the dark chords and cold textures but is slower, more noir and low-key than that of many Maschinenfest/Ant-Zen producers.
“Many Ways” is his fourth album, his first on Ant-Zen. It’s a work of moody and sometimes almost morose electronica. One comparison is with the work of the obscure 90s Viennese act Bannlust, although they stuck closer to a dark electro formula and were even bleaker and less ‘cinematic’. The best tracks on the album have a ‘widescreen’ quality and incite you to imagine scenes to accompany them.
Anders’ tracks sometimes tend towards generic dark electronica and it’s only with the third track “Dust” that things become really interesting. It’s a very dark and icy track with a sense of immanent menace. The album gradually builds until with “Hybrid” it arrives at its darkest, most isolationist point. The massive bass reverberations and intense atmosphere recall Sleep Research Facility’s dark ambient masterpiece “Nostromo.” Another highlight is “Phonique”, which has more momentum than many of the tracks, gradually turning darker and becoming corroded by harsher textures.
The final track, “Night & Day” is the most resolute, epic, and futuristic. Given how routine and even banal some very impressive technologies have become to us ‘futuristic’ is arguably a redundant category. Maybe ‘hyper contemporary’ is a better and more accurate term now that there isn’t the massive imaginative gulf between us and future technological realities that there was not so long ago.
Unfortunately there are two or three “standard” Ahnst Anders tracks filling out the album. There is nothing wrong with any of them but they tend to be unexceptional & over-long. It would be good to hear an album focused more intensively on the darkest and most intense of the atmospheres heard here. That said, there are some really fine tracks here and it will be interesting to hear Anders’ work go further in the future.