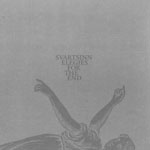 The Norwegian musician Jan Roger Pettersen has been releasing dark ambient compositions under the name of Svartsinn for ten years now, and although the last five years have been rather quiet in terms of output, he has now released an anniversary double CD. “Elegies For The End” (this is hopefully not the end of Svartsinn) consists of four new tracks clocking in at just under thirty-five minutes and a full length disc of remixes by various associates. The new work is said to show a more melodic yet obscure sound than previously, although I must admit to only being familiar with the name and not the music so far, and concerns the theme of failing to find a reason for one’s existence.
The remix disc features a moderate variety of sounds and styles, whereas the original Svartsinn material, aided on one track by Dahlia’s Tear, works more as one focussed, consistent soundtrack. The music presented could be said to be slightly generic, in the least critical sense of the word, showing all the characteristics required by dark ambient, composed with plenty of skill and imagination, regularly treading the fine line between subtle background textures and a typical tendency to veer into the uneventful. The wonderfully titled “Torchbearer, Kill The Light” has a splendidly cold, Scandinavian feel, with icy chimes and frosty synths, followed by the dense rumblings of “And Time Will Erase”, which periodically fade and regrow as a mysterious melody creeps into earshot. “September Dirge” is possibly the most despondent moment so far, conveying a strong sense of isolation and lack of purpose with its morose chords, and then “Vemod” is the fifteen minute closer, with a gentler, more soothing sound, warmer tones comforting the melancholic listener.
On the remix disc all bands have gone for a different track, except for Triarii and Gustaf Hildebrand both reworking “Lost In Reveries”, the former going for the martial industrial approach with triumphant orchestral strings and the sounds of battle, while Hildebrand is closer to the style of Svartsinn, with ghostly voices and freezing winds. Kammarheit’s “Traces Of Nothingness” is oppressive and smothering, in all the right dark ambient ways, and Letum’s version of “Livredd” is similarly claustrophobic, with thick, muffled booming in the distance and intimidating scrapings and scratchings edging closer all the time. The New Risen Throne remix of “As A Black Stone Monument” features an effective contrast between expansive synth pads and disturbing mumblings, the Visions performance of “Misanthropic Odyssey” lives up to its name well with an impressive sense of dread and Hovmod’s “No Passage To The Innermost” is a powerful finish, a soundtrack for a frightening psychological horror film. The other three remixes, by MGriffin, Life Toward Twilight and Tenebrious are all of a similarly high standard and the whole collection is faithful enough to Svartsinn that it flows well as a proper album in itself.