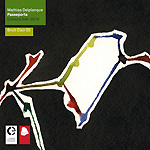 Mathias Delplanque, an artist synonymous with sound installations and immersive compositions, delves on “Passeports” into the phenomenon of the ‘non-place’ – ubiquitous urban spaces formed in relation to certain ends (transport, transit, commerce, leisure). A growing proportion of such space lacks meaning in the traditional, anthropological and organic sense because nobody feels significant (or any) attachment to it. If a place can be defined as relational, historical and concerned with identity, it follows that a space which cannot be defined as such will be a non-place (see, for instance, the writings of Marc Augé). Place and non-place alike may be familiar in equal measure – or unfamiliar.
“Passeports” is described as ‘a series of works based on sounds recorded between 2007 and 2008 in various locations related to transport in France: train stations, harbors, parking and transit areas.’ Both untreated and manipulated sounds combine on the album, transforming the raw material without use of additional sources. Occasionally, the connections are clear: the unmistakable roar of a passing train and the clack-clack of the rails on “Passeport 1 (Nantes)”, or the interspersed hissing of pneumatic mechanisms on “Passeport 5 (Lille)”.
Mostly, however, listeners will have difficulty picking out and identifying the source material from within the subtle meshes of sound. “Passeport 3 (Dieppe)” features serene tones like stringed instruments – effervescent layers that perpetuate, blossoming into complex relationships – and call center recordings, all running over a constant hum and thrum of background noise. “Passeport 6 (Nantes)” has a quiet drone murmur with indistinct mechanical noise; the sound gradually increases in presence, shivers and hovers, shifting into a stretched melodic drone. Delplanque, in fact, deceives his audience; instead of the identifiable field recordings we expect, he presents a series of polished ambient/experimental compositions.
“Passeports” mirrors the multi-layered interfaces of the non-places from which it derives, and Delplanque’s attentive ear expresses precisely the beautiful neutrality of spaces which, in the human experience, are rendered essentially meaningless. Yet these non-places can be seen as typical expressions of the emerging age of globalization, evidence of an established universal culture. In this respect, Delplanque lends them meaning, in an audible and immersive sense, through solid washes of ambient textures, swelling and churning drones, slight clicks and glitches, muted roars and a strangely comforting machine calm. Most fascinating is “Passeport 7 (Nantes)”, where patterns emerge almost unwittingly from empty space while ambient harmonies unfold against a deep rumbling background and rushing air. It congeals with masterful patience to arrive at a tranquil balance before progressing into darker territory: sinister, booming reverberations and unsettling squeals and clanks.
With “Passeports” the spatial interconnections that characterize global society are encapsulated in a release that, for all its unspoken symbolism, remains unpretentious and, on the surface, as neutral and accessible as the non-places which inspire it. The transitional relationship between sound and space explored by Delplanque’s work calls for a rethinking of our urban environment, even while enjoying its calming essence.