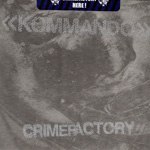 Kommando is the first project of Daniel Hofmann, a.k.a. Anton Knilpert/Dan Courtman, who has a hand in the work of virtually all the artists on the UMB label: Dogpop, Jägerblut, Kommando, The Musick Wreckers, Thorofon, UMB-Kollektif and more. The material gathered here is from 1993-98, and was ‘re-constructed’ (or re-animated?) in 2008. Komando is the primal soup out of which the more dynamic and politically-engaged Thorofon emerged. It bears all the traces, or scars, of its time and place and fits into the cold German power electronics style that emerged in the 1990’s.
The label and the lineage made me favourable to the idea, but after several listens I have to conclude it’s not (quite) at the level of Sektion B, Control or other similar acts. At times it seems strangely formal: the cold frequencies, harsh noise and distorted, malevolent vocals, Manson reference and misanthropic ideas are all correct but they lack the extra element that would make the work stand out as exceptional against similar releases (of which there are now many).
In a way, Kommando is almost too successful at creating a sludgy, dysfunctional aesthetic. Rather than coming after the listener, it stays twitching in the sludge, muttering to itself hermetically. It lurks in its own shadows, contentedly gnawing on its own entrails with no concern for anything but itself. In some ways I appreciate how these tracks resist my attempts to assimilate them but I’m not sure if this is because they effectively generate unease and disgust or because they’re sometimes just not sharp/brutal/dramatic enough to cut through and fully captivate my noise-jaded senses.
All too brief first track “Freak Out” is the most interesting. It’s a classic shortwave and noise dirge, a subtle chorale of ailing frequencies. The next track, “Enflamed”, is like a slower, more twisted version of Thorofon, featuring raw machinery sounds and focused vocals rather than power electronic screaming. A raw on/off pattern really enhances the track. “Crimefactory” is a kind of dysfunctional dance track, featuring looping beats that trip over themselves – almost like a kind of retarded or post-apocalyptic IDM.
“Kulthead” has quite a dynamic live feel, both the vocal and the background textures have a raw and powerful substance that isn’t always present on the CD. The unapologetically ugly “Hospitalizm” features an appropriately sick(ly) vocal. Something seems to be trying to crawl through the sludge but its motion is disrupted by an insistent, nagging bass sound. If you make it through the first thirteen tracks your reward(?) is “10 Minutes Daethrape” [sic]. The first few minutes are appropriately drawn out and painful, a mix massive impacts and cries in the void. It then ‘assumes power focus’ and a well-constructed and ominously slow minimal beat structure emerges, picks up speed then decelerates. By the end it’s claustrophobic and sluggish, full of dead stops, ailing frequencies and uneasy drone interludes. Ultimately, the album doesn’t end so much as die out, embracing its own extinction (but not before casting a few aspersions on the culture that produced it).