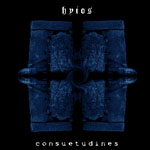 Once again, here rises a promising newcomer in the dark ambient/drone scene. With “Consuetudines”, his debut album recently released on the US label Malignant Records, this artist from Leipzig, Germany, proves that Hyios is a name worth remembering.
This record’s seven tracks are mainly composed of lengthy soundscapes, drones and pads crawling on one another insidiously, slowly generating an oppressive, oozing climate. It must be said to Hyios’ credit that most of the time he cleverly avoids the usual clichés of the dark ambient genre (such as the sound of wind blowing, ethereal voices, and so on); his samples and field recordings rather evoke insects scraping the earth, walls of deep caverns resonating with the sound of flowing water, grindings and growlings, the whole thing sprinkled with a few percussive metallic sounds. The result is a truly immersive experience, giving to the listener the impression of being held by the throat, trapped in this disturbing place, while a worse threat is lurking in the darkness.
Beyond that, some references to the great civilizations of the past (mostly Egyptian) are also discernable, of which the weight can be felt in the music as well as in the artwork adorning the CD’s six-panel digipak, as well as in a promotional video which can be viewed on Hyios’ MySpace profile, which sums up pretty well the album’s concept.
In brief, “Consuetudines” is really a pleasant surprise you should pay attention to, and Hyios an artist you’re going to hear about in the not too distant future.