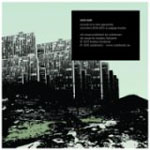 “Sounds of a New Generator” is the debut album from Swedish duo auto-auto, marketed as well as an idealistic multi-art project (which creates some pretty high expectations from the beginning). While not a ground-breaking release, it is an enthusiastic release with a few interesting tracks with hit potential from a young band that shows promise but still needs to develop.
One can’t shake a feeling of familiarity or dejá vu when listening to this release. auto-auto clearly follow suit on what can be considered a Swedish school of synth/electropop, incorporating an indie-rock/punkish attitude into this genre. It’s also quite obvious that Per Frankel and Johan Hellqvist aren’t strangers to darker electro dance-floors. Their compositions are simple resulting in energetic and rather effective dance tracks. Nevertheless, the duo have some work ahead of them in creating calmer ones as can be inferred from this album, which starts with a bang but fizzles halfway through becoming somewhat repetitive. auto-auto’s music is very clean-cut, lacking some daring and variety of composition, especially in songs that could be potentially more serious or meaningful.
Another of auto-auto’s faults resides in the lyrical content of the songs. Despite the crisp clear vocals sung in flawless English, this language isn’t auto-auto’s first language and it shows. Especially some of the songs that might be meant to have a darker edge don’t stand up to scrutiny. A point in favour is that the choruses to the songs work very well and are catchy as would be needed.
There are a few potential club-hits in here, like the opening smash title “Backstabber” and the track “Dog” (which is supposed to be the “hit-single”, having inspired a video). While not a particularly catchy track, “Super Ultra Clean” struck a chord with me, for the lyrical quirkiness and simple but effective instrumentation.