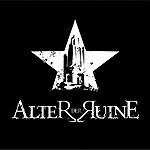 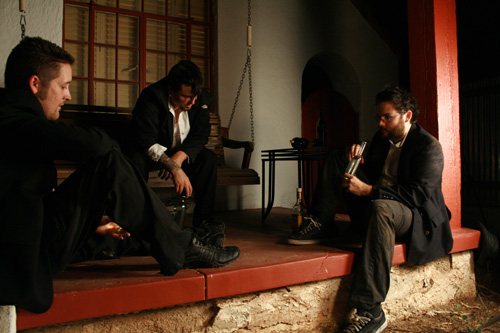 “Alter Der Ruine was brainspawned in 2005 as a device to get soft shoes to tap to a heavy beat. To compound this simple plan an intricate execution was employed. Long story short, 2 Mikes and 1 Jacob got together and made a racket that took the scenic route to its destination.”
– found lying somewhre on the Alter Der Ruine MySpace

Everything is going pretty well with us. We’re all pretty busy these days but we’re still putting in the hours to finish the new album.

Have you ran into any more cowboys since you got your band name?

As for cowboy run-ins we can’t say those are a regular occurrence anymore. Ever since we stopped wearing sweat shorts we’ve been attracting new breeds of local toughs. More often than not it comes in the form of a chip on the shoulder roller-skater who’s been pissed off since the advent of roller blades.

Ok, getting serious and down to business, how would you best describe your music to a new listener?

Also you don’t have to steer this convo into serious waters. We pride ourselves on being all serio all the time. It’s our kind of our business.

For those unfamiliar with us we’re not too sure how to describe what we do… Let’s just say Alter der Ruine is more or less just a big glam-noise flash of electro-fueled rocket sleaze.

The music is party music above everything else. Big, dirty and nasty party music.

Talking about parties, what was the craziest thing that happened before, during or after a show? Excluding the cowboys of course.

Hands down the craziest thing was a party in Richmond, Virginia. That night will live on in our memory as one of the most raging/strange nights we’ve been apart of. We’ve also told the people involved we wouldn’t talk about it anymore because of how nuts it was. For those interested you can dig around and find nuggets of it online somewhere.

Aside from that we played a show in Tucson once that had more than enough energy and enthusiasm on the crowd’s part. There were girls booty dancing right in front of the stage and guys behind them gyrating all over the place. It was very surreal. Our music rarely gets the reaction we got that night, but if it did you can bet we’d play a lot more frequently.

During two songs we pull a cowbell out and let people from the crowd take it for a spin with us. It wound up being played the whole set. We could just hear it out there and could tell that whatever hands it fell into that they meant business. So much so it was never returned and we had to buy a new one. We have one picture that will sum it up perfectly.

Here is that one picture that sums up the Tucson show: 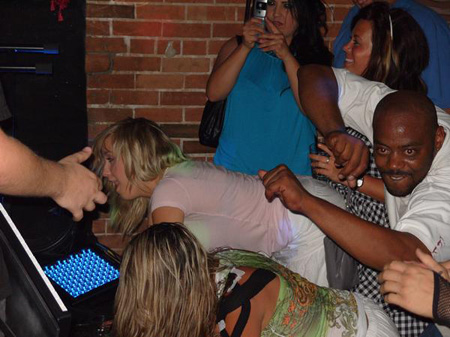 And here’s a follow-up but it isn’t as awesome: 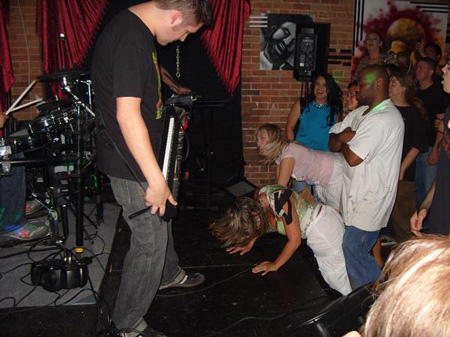 For the new album do you have a title or release date yet?

As for the new album title we have one we’re fairly certain will be used. We’re calling it “I Can’t Drive 155” and it will have no songs slower than 156 bpms. It’s a dirty, mean mess.

Now, a classic techie question: what’s your studio set up or live set up?

The studio setup is totally different from the live one. In the studio we write a lot in Ableton Live and Logic. There are a lot of synths used (both hard and soft). The Moog Little Phatty probably gets the biggest workout on that front. There are also some Nords and a Novation SuperNova that make appearances.

Mike J. handles the mixing/mastering now and he has a ton of tools at his disposal. For those really into what we run you can check out his company and nerd off at the gear list if that’s your bag (http://mixesreborn.com/fr_main.cfm).

The live setup is a whole other beast. It has Mike J. on drums, Jacob and Mike T. both play Frankensteined wireless keytars with Kaospads and our new member Bobby bounces between synths, drumming and bass guitar. The live shows are going to be insane and we’re really looking forward to them.

Do you feel there’s a lack of cowbell in today’s industrial?

There isn’t so much a lack of cowbell as much as the lack of what it represents. To us it implies not taking oneself too seriously. ADR always want people to have fun at the shows and one great way to get people into it is to have a good time yourself. We use the cowbell as a party time gimmick because it is fun and ridiculous. There are enough bands being serious and we didn’t have the desire to hang out in those waters.

As far as the scene goes, if it is lacking cowbell or that aesthetic then maybe try listening to something a little less serious? Who knows? That’s all a personal preference in the end.

Are any of you involved in other projects?

Yes indeed! Here’s a list of projects, if really interested in who does what readers can do the homework.

Attack Decay Release, Dust is Noise, Aids Free, Boogie Nazis, Fake With Braces… There are more too but they escape us. Oh, Mike J. is beating skins for Kevorkian Death Cycle these days too.

Having worked with fellow artists, what did you learn to better yourselves in?

The one main thing we’ve taken away from working/playing with so many bands is that there is no point in being an asshole. We try to be as personable as we can be and treat everyone with respect. That gets you a lot farther than being a dickhead. What’s cool is this seems pretty common now. The scene vibe is a lot friendlier these days, at least where we’ve been playing.

Finally, an open soap box, what are your final words for the readers?

Oooh, a soap box! We’re always excited for these rants but when it comes time to spew our venom we never have any. We’re just a limp snake that’ll bite you but you won’t have to go to the hospital. Which is good because you can keeping coming back for more. Thanks for taking the time out to chat with us! We really appreciate it.