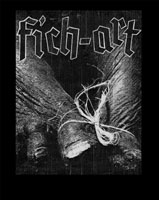 Fich-Art was founded in late 1989 by the members of Ars Moriendi to promote their music. It is a non-commercial underground label which, in addition to its own tape and CD-R releases, features a huge backcatalogue of recent Ant-Zen artists like: Asche, Monokrom, Morgenstern, Synapscape and Templegarden’s as well as early recordings by Imminent and Hypnoskull… and by The rorschach Garden as well! 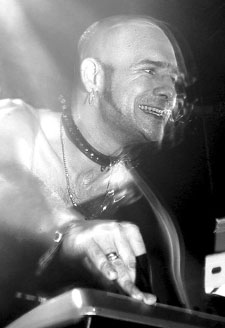 1 – How and why did you come about starting Fich-Art?

Fich-Art was started in 1989 by Philipp Münch, Sven Pügge and Andreas Schramm, the members of the first Fich project Ars Moriendi, just because we wanted to release our recordings and no other label was interested in doing this at that time. None of us had much money to invest we had to release tapes, but since then Fich-Art has released more than 70 tapes, CD-Rs & even a CD (Eva|3). When Ars Moriendi split in the mid-nineties, I kept Fich-Art alive (thankfully still supported by Philipp).

2 – When you started Fich-Art, were there any labels that you could say were a reference/inspiration for your efforts?

When we started Fich-Art, we weren’t inspired by other tape-labels, just because we weren’t aware of the huge tape-scene that already existed in that period. We experienced this scene afterwards when we had our own releases and at that time we exchanged much more tapes than we sold. Of course we all had been influenced by the output of other bigger labels, such as Grey Area, Mute, Tesco, Walter-Ulbricht-Schallfolien.

3 – Almost mandatory question, how did the name “Fich-Art” come about?

Hehe, funny question… Well, Sven created a fish-shaped bottle-opener at school which was quite crump, so we called it the fich (instead of fisch). We used it a lot on the early Ars Moriendi sessions and so it was quite present. When we had no better idea for the name it was just there… :)

4 – Since the inception of Fich-Art, are there any events in the history of the label that you’d consider as particularly relevant, from difficulties and setbacks to successes?

Since 1989 a lot of things happened but more in a mode of slow evolution, step by step, without so much particular impacts.

Sure the Ars Moriendi split had quite an impact on Fich-Art, but there Fich-Art nearly ended, and it was a push when we came in contact with Ant-Zen. We’ve had a great collaboration for years now – S.alt helped me a lot with that Eva CD – and another great innovation for Fich-Art was when I got my first computer where I was able to create CD-Rs.

5 – So far what would you consider as special highlights (or successful) releases and artists in the history of Fich-Art?

Hm, special? Successful? No, I like them all and they aren’t all bestsellers… ;) But of course, the first real CD release it is something special for me, as special as the first CD-R release a few years ago or the first tape release.

6 – Are there any releases in particular that you would recommend as good ‘introductory material’ to the Fich-Art label?

It’s difficult to pick out just one release for the Fich introduction because there are so many different projects on the label with very different styles. Unfortunately the latest Fich compilation (Fich o25 “Vital Energy”) is very old, so I won’t recommend that so much. I still plan to release a new Fich compilation on CD-R (it should had been the Fich o50 jubilee, but I’ve already released o72 and I still stuck with this plan…how embarrassing!).

Currently I would recommend everybody who would like to be introduced to Fich-Art to check out the Fich-profile at Virb.com (www.virb.com/Fich-Art) – there are a lot of mp3s uploaded from artists such as Ars Moriendi, Asche, Morgenstern, Synapscape, Monokrom, The Rorschach Garden, Templegarden’s, Eva|3, Alien Meets Whale, Kyam, Mandelbrot, Vuoto, and Moata-Omen.

Oh happy, happy me – no regrets and everything is fine with Fich-Art. Of course when I could have spent more time on the label, who knows where it might have led to, but so far, I’m cool!

8 – An obvious question, but what is Fich-Art’s ‘relationship’ with the Internet? From promotion tool and digital sales to file sharing and piracy, how has it affected you?

The internet is a double-edged sword- on one hand it’s great for communication, promotion and dealing. But on the other, the illegal downloads and copies are pretty bad for anybody who releases CDs or CD-Rs, even for a small label like Fich-Art. I don’t know how many illegal Fich downloads are going on, but I can tell you that I sold more copies two years ago than these days. :(

9 – Slightly related to the previous question, how do you see the concept of ‘net labels’ and, as a label-head, what is your perspective as to the future and evolution of physical media (CDs, vinyl, etc)?

Unfortunately I don’t know much about net labels and I don’t have any idea what happened to physical media: perhaps they are anachronistic… But we will see…

10 – Perspectives for the future, what lies in the horizon for Fich-Art? Can you share some long-term goals and where would you like to see the label heading to?

I don’t have a “five year plan” for Fich-Art but I’m sure that I will go on releasing stuff on CD or CD-R or even on the net. Fortunately Fich-Art isn’t forced to make much profit (but of course I would appreciate if there was some because then I could invest even more into new releases), so I’m easy about the future.

The final comment I will give you when I’m ready to die. :)