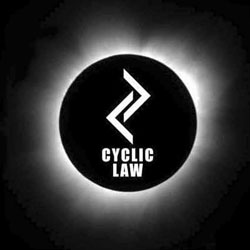 Operating out of Montreal, Canada, Cyclic Law is a label dedicated to promoting talented musicians from the Dark Ambient and Death Industrial/Martial sub-genres of electronic music. Managed by Frederic Arbour, also known for his musical work as Visions, this label has a strong aesthetic focus and gives particular attention to the coordination between the music and the visual aspect of its releases. 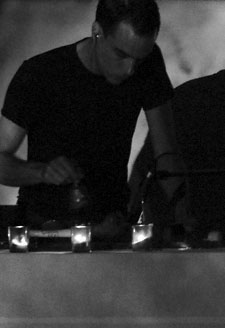 1 – How and why did you come about starting Cyclic Law?

Well it all started with the completion of my first solo work as Instincts. My then-roommate (a.k.a. Bustum) and I decided to join my music and photographic work and his visual art together in one unique format, thus the Instincts/Bustum “The Mystery Visions” CD & Cards project was conceived. This also saw the birth of Cyclic Law. I wasn’t too sure where this would take me, but we just really wanted to do this project.

2 – When you started Cyclic Law, were there any labels that you could say were a reference/inspiration for your efforts?

I had worked for a few years at Profane Existence, a punk D.I.Y. record label and distribution back in ’95, so I got most of my experience and knowledge of running an independent label from working there. Musically when I started Cyclic Law I was, of course, quite into Dark Ambient and Industrial music. I was listening to a lot of World Serpent and CMI acts but this didn’t inspire me to start a label; my previous experience and interest in getting my music out there were what pushed me forward.

3 – Almost mandatory question: How did the name “Cyclic Law” come about?

From personal reflections about life’s “Cyclic Laws of eternal return.” Daily cycles of the sun and moon, the ever changing of seasons, human growth and decay, fluctuating emotions, etc. From an earthly point of view many events are marked by a recurring cyclic pattern. These phenomena have always been of high interest to me, thus Cyclic Law seemed like a decent name to me; a name in which I could always find relevance and meaning.

4 – Since the inception of Cyclic Law, are there any events in the history of the label that you’d consider as particularly relevant, from difficulties and setbacks to successes?

So far there haven’t been any real setbacks, and I can honestly say that everything has been just a very positive experience. There are always things you can claim could have been done in a better way and so forth, but these simply become normal adjustments to be made along the path. It’s an ever-learning experience.

5 – So far what would you consider as special highlight (or successful) releases and artists in the history of Cyclic Law?

Well Karjalan Sissit and Sophia are definitely acts that get a lot of attention and which I’m very grateful to have as part of the Cyclic Law family, as these have been personal favorites of mine for many years and also very dear friends. Kammarheit has also been a personal favorite and has also gotten well-deserved recognition. Yet to me each release is a special highlight…

6 – Are there any releases in particular that you would recommend as good ‘introductory material’ to the Cyclic Law label?

The best ‘intro’ to Cyclic Law releases would have to be the “Nord Ambient Alliance” compilation. It’s now sold out at our office but there are some copies still around in various mail orders. But my aim with Cyclic Law is to have a concise label, meaning one can kind of expect what sonic grounds each release will locate. Not that all acts sound the same – quite the opposite – but I like the label to have a certain ‘sound’ if you see what I mean. The two acts that diverge from the Dark Ambient agenda of Cyclic Law, but are also still quite at home here, are Karjalan Sissit and Sophia with their more bombastic and percussive elements. Others I’d suggest in the Dark Ambient style I want to expose and promote are Kammarheit, Svartsinn, Gustaf Hildebrand, Northaunt and so forth. I could name them all, as each act really does have something unique that it conveys, but I’ll leave it to the listener to find his gem.

Really there’s nothing I regret. My only regret would be that this style of music is still too unknown and a lot of people are missing out on very unique worlds and atmospheres.

8 – An obvious question, but what is Cyclic Law’s ‘relationship’ with the Internet? From promotion tool and digital sales to file sharing and piracy, how has it affected you?

The Internet is to me one of the most fascinating tools for human interaction on a global scale. It’s the lifeline really; everything I do has to do with the Internet, from promotion to sales and daily communications and everything in between. It’s definitely a fantastic tool for communication. File sharing and ‘piracy’ has only affected the major labels I feel, for small independent labels that do not rely on million dollar promotional schemes and mass media propaganda to sell audible rubbish to the masses, the Internet has only helped getting the right music to the right people and therefore getting the appropriate support from the people that do want to see this type of music exist and endure.

9 – Slightly related to the previous question, how do you see the concept of ‘netlabels’ and, as a label-head, what is your perspective as to the future and evolution of physical media (CDs, vinyl, etc.)?

Netlabels have their place for sure. Formats have changed a lot in the past years and who knows what it will be in ten, twenty years from now and more, but I can’t see an MP3 or file sharing only future as something plausible. I also personally really like to have an actual item in my hands, especially if great care has been given to the packaging to help enhance its musical content. It’s a question of personal choice but I know a lot of people are like me, they still want to have the item, to collect etc., so as long as there will be a demand for such items then CD, vinyl or any other physical formats will survive. It can’t all be digital; we need tangible things, too.

10 – Perspectives for the future: What lies on the horizon for Cyclic Law? Can you share some long-term goals and where would you like to see the label heading?

Right now there’s been the very recent release of the Tholen “Sternklang” CD as well as the Sinke Dus “Akrasia” CD. I’ve also started another label named Twilight Foundation. This label will be dedicated to a more varied choice of music, from Doom to Black and Folk to Experimental; anything I see worthy of release that does not fit along the lines of Cyclic Law’s agenda. The second release on this label has just been out also, the Towards Darkness “Solemn” CD, a Montreal Doom/post rock/experimental band (and good friends) that also features current and ex-band mates from my Atmospheric Doom band, Longing For Dawn.

There are a lot of things planned for the future for Cyclic Law, with a release schedule nearly booked for the next two years… But upcoming will be Cities Last Broadcast, a new project of Pär Bostrom of Kammarheit, and Lacus Somnorium, a new project of Gustaf Hildebrand and Amanda Vota of The Floating World. There’s also a new Karjalan Sissit DVD and mini-CD, a new Nord Ambient Alliance II compilation is also in the works, a new Visions album, new Kammarheit, new Northaunt and some great surprises… I also plan other releases on Twilight Foundation, the next one being the first album by Quebec’s Esker, a very unique Black/Experimental band also featuring Longing For Dawn members.

My two favorite labels, and therefore most if not all acts attached to them, are Aural Hypnox and Loki Foundation; Aural Hypnox for the elemental, spiritual channeling of their acts and their unique approach to music and Loki for being so consistent throughout the years and providing some of the best industrial soundscapes there are.

Well I thank you Miguel for this opportunity and I wish long life to Connexion Bizarre and your musical projects.