Roughly active for over ten years and with a regular output for almost five, the Slovakian label Aliens Production is perhaps one of the prime references for underground dark electronics in Eastern Europe. With a roster that includes projects like Disharmony/Oxyd and Anhedonya, Aliens Production has also acted for a hub for the promotion of Eastern European talent through their compilation releases, of which the more recent is “Hypercommunity”. 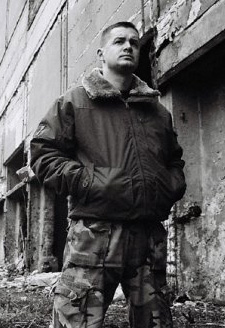 1 – How and why did you come about starting Aliens Production?

In the past we have tried to present from the position of semi-publishers, and somewhere in the ’90s we released the first tape compilation of our Slovak artists, “Be Infected”, so it’s a CD-R following that we have made as intermediary to other publishers, whereas for us it was the only form of presentation and reflected on our standards, since we were quite young and had no finances for the release and presentation of our home projects. Somewhere in 2005, when we were returning from one festival together with Headdreamer, we had a thought to present projects under our own label, since musically we had in our neighborhood found, and had friendships with, musicians who were and still are very talented and productive in alternative genres. Also, a big driving force was the fact that we were tired of waiting and negotiating regarding our project dISHARMONY in its following releases, so we have made a quick road and we started to release and present with them under our own label. So that was the beginning of Aliens Production label.

2 – When you started Aliens Production, were there any labels that you could say were a reference/inspiration for your efforts?

Inspiration in that time was all around us. A lot of good music, quality releases and, for me personally, the desire to create something of my own and to gather it under my label.

3 – An almost mandatory question: how did the name “Aliens Production” come about?

Aliens Production was in the beginning the printed magazine “Alien” that we have been publishing in the ’90s and with time from it has been created a web e-zine, similar to yours. We have liked in that time the title “Alien” and that has stayed with me till now. In fact, all my activities I gather under AP. As zine, label, or my tattoo studio that is called Aliens Tattoo.

4 – Since the inception of Aliens Production, are there any events in the history of the label that you’d consider as particularly relevant, from difficulties and setbacks to successes?

In essence, for us, with each release is a little problem. There is minimal media interest and this musical style is totally underground. Also there hasn’t been a company that would release and produce CDs, and if there was, it was so unbelievably expensive and the process was quite lengthy. Today it is much better regarding supplies and production but interest is substantially smaller, so it’s a misery and we survive only so-so…

5 – So far what would you consider as special highlights (or successful) releases and artists in the history of Aliens Production?

If by that you mean our own releases, then for me every one is exceptional and special. We have quite a big set of artists that are devoted to various forms of electronic underground, so what we offer is quite varied. Exceptional releases were “X-Frames” from dISHARMONY and Anhedonia’s “Ontology”, since they have both sold out.

6 – Are there any releases in particular that you would recommend as good ‘introductory material’ to the Aliens Production label?

All of them (laughs)… I don’t have any favorite since all are different. For the moment we have released a hot new compilation, “Hypercommunity”, that brings completely new and modern projects, and listeners will find there sixteen tracks. It should be grabbed because it’s limited to 300 copies and is presented in an interesting package.

I think that I wouldn’t change a thing. Only if my money would return back that I have invested into the label (laughs)… But if I would be doing it for money then I would never start doing this.

8 – An obvious question, but what is Aliens Production’s ‘relationship’ with the Internet? From promotion tool and digital sales to file sharing and piracy, how has it affected you?

We’re presenting ourselves on almost every commercial portal. So everywhere where it is possible, and of course we have our own website (www.label.aliens.sk). Also, this year we have started to release digital releases, and we have two Headdreamer digi-CDs and the latest release from Anima Mundi. All our digital forms are distributed by the label Aphotic Audio, including releases that have been released only on CD or sold out. Regarding burning and downloading: it’s a modern age and MP3s are everywhere and people are lazy, so with one click you have music at home. It’s wrong regarding the artists and also you can feel it in the sale of CDs; for me it’s totally devastating. I take download as some sort of possibility to get to something new, but MP3 for me doesn’t have any value. I like a CD; when I pick it up I can have something valuable in hand. I guess a lot of people don’t know that feeling, even though you still can find some fans that will buy that CD, and with it will support music and the people that are behind it all.

9 – Slightly related to the previous question, how do you see the concept of ‘net labels’ and, as a label head, what is your perspective as to the future and evolution of physical media (CDs, vinyl, etc.)?

Net releases don’t bother me when they are well presented and, sure, for some people it’s difficult to collect a lot of plastic covers at home under the bed. So the net label has its advantage and for sure it’s a good form of presentation. For me personally, CD is still number one, although it’s endangered and slowly it disappears from the view of people that listen to music. At least here in Slovakia. We’ll see what will come, since eventually the cars will fly above our heads and I guess I will even go on the toilet digitally.

10 – Perspectives for the future: what lies on the horizon for Aliens Production? Can you share some long-term goals and where would you like to see the label heading?

For now, it’s open. We don’t have any concrete plans. Open space and nothing on the horizon. If selling would be better, then I would have the possibility to release every month or week, since there are still projects that have spoken to me, but for now it’s not possible.

For sure it will be fresh blood at our label. This year we have gotten under our shield even foreign producers who have very strong potential. Soon it’ll be the German one-man project In A Mindset, Greek Miktek and Argentinean Structural Fault. Also, I’m following the excellent development of a second Ambiguous project, ISH, and his interesting concept of natural atmospheric music and IDM. Also, we have prepared interesting digital releases from which will soon be out a remixed Headdreamer CD that gathers excellent work.

12 – Thank you for your time. Do you have any final comments?

Thank you for the time and space. I wish you and your web pages many thrilled readers and of course a lot of excellent music. Best regards from far Slovakia.