Sometimes good music can easily slip by unnoticed even if one is on the lookout for it. That is especially true of very small labels like Killing Music, a young upstart synthpop label from Sweden. Picking up the torch for Scandinavian synthpop from labels such as Tatra and October Productions, Killing Music is a label to be on the lookout for in the future, the quality of its releases compensating the current lack of quantity. 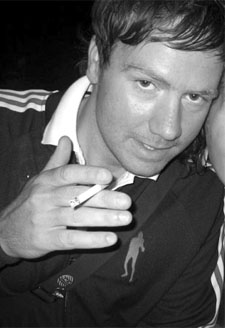 1 – How and why did you come about starting Killing Music?

I have been working in a record shop for eight years in Gothenburg, Sweden, where I’ve met a lot of people working in the music business. Some years ago I started an “indieclub” named Killing Music, because of the nice looking logotype… Therefore I needed a company, which now has also become a record label.

2 – When you started Killing Music, were there any labels that you could say were a reference/inspiration for your efforts?

Yes, of course. I have always been interested in different labels, like Factory, Sarah records, Creation and Mute. There is also some really great Swedish labels that have inspired me; Service, Labrador, the old synthish Energy Rekords and Norwegian Tatra records. Always high standard artists on those labels.

As an old record collector, especially for vinyl, I saw this great logo with the cassette and the warning: “Home taping is killing music, and it’s illegal” on the innercover. I’ve always loved that one and thought “Killing Music” would be great to use for the venues and now also for the record label.

Well, everything has really worked out well. We had a great release party for the debut-CD of Disco Digitale at the old opera house here in Gothenburg. A very beautiful and historical venue where about 600 people came partying with us. Another fantastic moment was when 047 were special guests on Swedish National Radio summertour last year, standing in front of the crowd playing the crazy song “Ankan” (about a duck…) And people absolutely loved it..! Weird…

5 – So far what would you consider as special highlights (or successful) releases and artists in the history of Killing Music?

I think both 047 and Disco Digitale’s releases have been highlights for me. Right now we are working with the second single of Baby, Don’t Hurt Yourself and some big live shows, and there has been a lot of magazines writing about that. I think their new single “The hands you feel while making love are not mine” will become a success…

6 – Are there any releases in particular that you would recommend as good ‘introductory material’ to the Killing Music label?

Hmm, after all, this is a small company and for now we only have these three bands. But more things will happen later this year… So try the debut records from both Disco Digitale and 047, because that’s what Killing Music sounds like for now…

No, I don’t think so. No regrets at all. I was really interested to enter the music business from another direction, and I learn things every day. I still work in the record shop and I make my venues almost every week, so the record label is just a part of it all…

8 – An obvious question, but what is Killing Music’s ‘relationship’ with the Internet? From promotion tool and digital sales to file sharing and piracy, how has it affected you?

I can definitely see a decrease in people buying records at my work. The CD is almost dead here in Sweden, at least for the big companies (but vinyl still works, though). But for me as a small label and a smaller genre I think people will support us and the artists. At work we still sell records with indie artists, but we don’t sell any Avril Lavigne, Hillary Duff or Britney Spears… Understandable maybe…

And now we have started a “Killingshop” where you can buy our releases over the internet, and also a site where you can buy the music as downloads. I dont know if it’s gonna work out, but for now the sales look good.

At first, I didn’t like the netlabels. Maybe because I’ve been a record collector for such a long time and I’ve always wanted the “real” records. But I think I’m starting to change my mind about that now (horrible thought…). In the future people maybe don’t need to own the physical CD’s, I mean, the kids today have no habit to buy records. Maybe we are the last generation of record buyers? My younger brothers and sisters have almost never visited a record shop, even though I work in one… But why would they, when they can get the music for free on the internet..? I think I have to talk to them!

10 – Perspectives for the future, what lies in the horizon for Killing Music? Can you share some long-term goals and where would you like to see the label heading to?

I don’t have any big plans, like taking over the world or so. I just want to have fun with my friends and do things in my own way. No stress, no coercion, just a way of living and spending time with each other. If people are interested (which they obviously are…) it’s just a bonus. We’ll see what happens. But there are more releases to come and maybe some new artists as well. Time will tell…

Label: Luxxury (http://www.luxxury.se) – a crazy friend of mine who has a small label here in Gothenburg with some very good music.

Artist: Jacques C. (http://www.myspace.com/jacquescmusic) – a guy from Stockholm who played at my venue lasta few weeks ago. Great electropop. Listen to the song “Thank you for the music”, my absolute favourite song right now!!

Thank you, and keep up the good work! Here are some essential links to listen to the Killing Music artists Disco Digitale, 047, Baby, Don’t Hurt Yourself.