Displacer is the project of the very talented electronic composer Michael Morton. His latest release, “Cage Fighter’s Lullaby” is the third studio album from Michael on the French label M-Tronic Records. Aside from his work on M-Tronic, Michael also runs the very cool Crime League netlabel where he’s released two Displacer CD’s (“Remixes for Free?” and “B(uddha)-Sides.”). 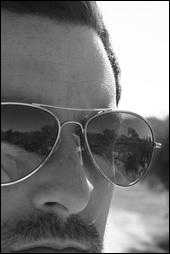 01. A few months ago you mentioned that you were thinking about ending the Displacer project? Has your mood changed since and if so, have you planned a follow-up to “Cage Fighter’s Lullaby” yet?

I’ve gotten to a place with Displacer where I became uninspired and stuck in what I was doing. I couldn’t get to a point where I was furthering it and pushing myself to step up to a different level I was trying to achieve. Basically I felt like I was doing the same thing over and over and that’s not why I started doing this. My emotional outlet became a formula for myself almost and that doesn’t push anyone to be better at anything. I always want better for myself in everything i do from my career as a graphic designer to my personal life as well. So it all came to a halt one day when I was writing a new track. From there on for at least 6 months I couldn’t find ANY inspiration to get me through the block.

I also went through a phase where I felt I had a huge stigma against me due to labels and promoters telling me where I belong and I can’t subscribe to that either. I started listening to other people too much instead of my own inner self…

I make music because I love it. And that’s where I am again after a great break and soul searching… I have to keep it honest for me.

I’m back on track now with Displacer as well as realizing to avoid stigma’s from now on I’m actually starting 2 other projects that my music can fall into for myself. As well I’m trying to get Antechamber off the ground again this year with S.eto of S:cage. We’ve been trying too many years and now’s the time for us to ramp it up.

So honestly, I have no follow up PLANNED, but it’s brewing now in the back of my head while I work at it. Just expect more sometime this year.

02. The Crime League netlabel site has become rather quiet as of late, though it makes mention of some promising releases coming. Any hints as to when we can anticipate those coming?

I had a grand scheme for crime league, something I’ve been trying to get going for over 2 years now. Unfortunately it’s on the back burner again after heavy financial problems for me relocating to California. C’est la vie. I hope I can focus on it a little this year, I had a couple of pressed items that won’t happen I’m sure… it’s tough but I want to do it right the first time. Maybe I can get a few free albums on there… I know Timid had some great material I’m trying to get released still. Detroit techno influenced industrial goodness… Diff_cult and Famine from toronto as well… they’re the shit. Check ’em out on myspace if you can!

03. What is your all time favorite or most inspirational piece of equipment, be it software/hardware?

I’ve always loved the fullness and warmth of the Roland Juno series keyboards… I used a juno-106 for all 3 albums. No matter what, it makes the most emotional sound… hot love. But I can’t say I only have one love…The Waldorf Pulse is the sexiest for bottom end… Cubase is my favourite sequencing software… I should stop.

04. On January 13th you’ll be playing Dark Live Fest 3 with HMB, Gregory and Rorschach Garden. What do you have planned for this? Will you be playing mainly songs from “Cage Fighter’s Lullaby” or a mix of all your albums?

It will be similar to the live recording I did for COMA in montreal… so that will be a few tracks from all albums as well as a couple of new tracks to test out, that no one has heard yet. That should be a fun release for me. There’s nothing better than hearing my music through a kick ass system and grooving along with the audience.

1. Lateef and the Chief “maroons: ambush” – this is a throwback to eighties hip-hop, but cross that with DJ Shadow influence and super HOT production and melodies. These guys made something fun,political and intelligent all at the same time. Not to mention great vintage synth sounds… i love it.

2. Nightmares on Wax “In a space outta sound” – sampling genius, I have no idea how this guy balances out so many layers so well all crisp and perfect. the production is key for me on this one as well.

3. Dabrye “Two/Three” – gritty, IDM meets hip-hop meets whackiness I love. Crazy good use of vintage synths, especially the moog concertmate… I have one and I STILL don’t know how this dude made his sounds come out of it. Killer. It’s also not your standard sequencing. It’s all over the place, non-linear and dirty… but still crisp and creative.

4. Larvae “Dead Weight” – the songwriting on this album is stellar and way out of my league. heh. such a great job on atmosphere and programming, sampling, the vocals blow my mind. I can tell a huge amount of work went into this and that alone makes it stand out over anyone else. He’s still got the madness I love but it’s so much more… musical.

5. Keef Baker “Pure Language” – I think Keef writes the best melodic drum and bass with evil catchy hooks… damn him. “Number 42” is one of my favourite songs ever for this and regularly play it along side my older favourites. He makes it sound so fluid and easy… great job.

Thanks for the interview and awesome questions!