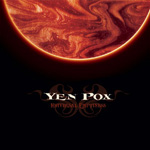 It is not every day that a new release by Yen Pox sees the light of day. And when it – in this case – concerns a 10″ vinyl, well… Let it be said that this one was highly anticipated by their fans.
Yen Pox is a cross-American project of two persons, Michael Hensley (a.k.a. Blood Box) and Steve Hall (who is also known from his solo project, Veil of Secrecy). Both are gifted musicians in different aspects of the genre ‘cinematic isolationism’. Where Blood Box recently evolved towards more layered drones and sound sculptures, Veil of Secrecy’s latest release (which has been far too long ago, Steve) was a recording in which the compositional aspects were more pronounced in combination with heavy manipulation of a bass guitar.
“Universal Emptiness” is the third vinyl for Yen Pox and this time it’s a ‘simple’ black item with two tracks, entitled “Above” and “Below”. You would ask, ‘so why is it so special?’ The answer is: The Sound. It took three test-pressings to be fully satisfied with the way the deep frequencies were captured in the grooves. And yes, this can be heard very clearly. An awesome production.
Both tracks would be categorized under dark ambient / drones, and where the A-side pays extra attention to the string manipulations on bass, the B-side is a bit more thickened in its layering, with prominent placement of analog sounds throughout the whole spectrum.
Substantia Innominata has added another classic release to its roster, and all parties involved have something new on their CV of which they can be really, really proud.