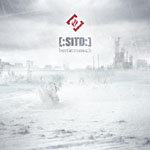 After taking the DAC by storm with their first two albums and numerous singles, the German trio [:SITD:], or Shadows In The Dark, return with their third long-player titled Bestie:Mensch. The main theme here, it seems, is to expose, or perhaps recognize the beast in everyone, while underlying motifs explore mortality, personal loss, and social upheaval. Compared to their last album Coded Message: 12, Bestie:Mensch doesn’t head straight for the dance floor, but rather takes a more gradual path to that same destination, stopping along the way to show the listener a few newfangled tricks.
A certain maturity and grace is presented here, decidedly melancholy at that, with less of a linear flow to the music by exhibiting different influences within their signature sound. The [:SITD:] we’ve come to know and love is still here in full force, with heavier, harder-hitting beats, epic build-ups and crumbling break-downs, soaring synthlines, and catchy hooks. Carsten Jacek’s vocals haven’t evolved much from the forceful, raspy whisper they’re known for, however, his lyrics have shown some improvement and still generate an impact, most notably on the dark and brooding track “Telepathic”. A few songs are sung in German but to an English-speaking listener, they still flow quite well. [:SITD:]’s music producer, Tom Lesczenski, even takes on lead vocals for two of the album’s more melodic moments; the emotionally-charged “Displaced” and the bitter-sweet serenade “Reincarnation”.
There are plenty of potential club hits here like “Stammheim”, “Propaganda”, “Silver Bombs”, and a different version of their first single “Kreuzgang v2”; the latter being decidedly more calculated and refined than it’s respective counterpart. These latent dance floor cuts seem more sophisticated and purposeful than the more linear movements from previous releases, which will probably sit well as headphone indulgence, but may fall short with narrow-minded club DJs.
Overall, Bestie:Mensch is a very strong Electro record that not only shows purpose and progress for an already fantastic band, but should also lure in many new listeners as word gets out about this excellent album.