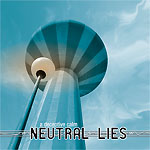 Lies, it is generally accepted, are a bad thing, bringing no good to anybody, except perhaps short term gain to the liar. White lies might be quite good, sparing the innocent from uncomfortable truths, but what are neutral lies? Could these be statements which bring no harm or benefit, whose perceived falsehood would somehow be indistinguishable from the true version of events? Regardless of the odd name of choice, Neutral Lies are a relatively new French synthpop act and “A Deceptive Calm”, an easy concept to imagine, is their debut album. Catchy electronic pop tunes in the classic style, with melancholic synthesizer melodies over taut analogue bass lines and delicate, lightweight percussion sounds, topped off with clean, emotive singing. No need to lie about this subject!
The opening of “(In Your) Neutral Eyes” (there must be something about word play rather than odd concepts of lying going on here) is a promising start, with a haunting lead refrain and some effective rhyming in the lyrics, then “Commuters” follows well, bringing to mind glum passengers on a bleak suburban train in the early eighties. “S.X Girls” is a weak track which should maybe have been left for a single B-side, with uncomfortably crude stereotypes about the women of England’s most maligned county, but then “Introspection” is a subtler affair lyrically, raising the quality with another strong tune. “Between Glasses And Reward” takes things into a slightly more romantic direction, with gloomy strings in the chorus, and then “Laugh At First Sight”, though somewhat weaker in the vocals than most tracks, is quite a touching tale of a tragic social outcast character.
“Rose In The Coffin” fits more in with the darkwave scene of the late nineties and could go down well with the cyber gothic scene still stuck in that period, especially with the clichéd “ashes to ashes, dust to dust” samples, then “Waking Up On A Battlefield” continues in this vein, with its slightly overblown melodramatics. Then finally we get a French song with “Le Fou D’Echecs”, where the vocals seem curiously awkward, but where the chorus sounds pleasingly classic, before the appropriately titled “Nostalgia” provides one of the stronger tunes on the album, well crafted down to the intricate percussion sounds. That might have been better placed as the album closer, as “Slough Of Despond” is one of the less memorable tracks, at least until the main melody kicks in, and leaves a reasonably satisfied feeling and the sense that Neutral Lies will be one synthpop band to pay attention to in the future.