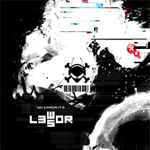 Noise. Not exactly a music form that is renowned for its sense of humour. In fact it’s mostly quite surly and terribly serious and mostly made up of very angry people. Sometimes wouldn’t it be nice to have the anger that fires it up, just to add a touch of the vaguely ridiculous? Well, I think I’ve found the album that does just that!
There’s not much information on Lewsor, but he’s produced an album for the frankly quite awesome Dexy Corp, was/is a part of Extasick (Dtrash Records) and according to his website is something of a ‘sonic pirate’ – so make of that what you will. The website is well worth looking at, as the design is really something else.
“No Error It’s Lewsor” is filled with breakbeats, noise, guitars, attitude and a glorious energy to it that I defy you to not sit up and pay attention. Imagine the musical child of The Prodigy and Venetian Snares and you’re getting somewhere close. Digital Hardcore for the masses. Naturally Audiotrauma is the perfect home for this utterly insane, but completely satisfying release.
“Bug Beat” starts in a rather unassuming manner, leaving you thinking about just what it is you’re listening to, but as soon as the beats start, don’t expect any reprieve on them until “Death Knight Night” quite literally beats your eardrums in to submission with blasted beats that wouldn’t sound out of place on a Napalm Death album. “Falling Star” sounds like The Prodigy cranked up to 11, except with odd vocal samples. “Rock N’Ram” I could see a lot of metal kids going mental to in a mosh pit whilst simultaneously wondering just what the hell they’re dancing to!
“Rock N’Ram”, “Coin Operated Bitch” and “Industrial Brass Band” are highlights but the whole album is an absolute must have for anyone who loves Digital Hardcore and Industrial as it takes both genre’s and gives them a thorough shaking. I imagine that live is where this album will absolutely destroy.