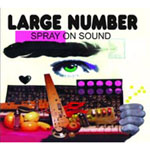 “Spray on Sound” is the solo debut of Ann Shenton, ex-member of the critically acclaimed but now defunct electronica cult band Add N To (X). All the hype around Add N to (X) will certainly work in favour of Large Number, at least in terms of earning it some exposure. This is an album which can be quite confusing in the beginning but which is not very difficult to get into.
Paradoxically, the music is quite simple and complex at the same time, almost chaotic, with quite a few unexpected twists and turns. Not at all unlike a collage: assembled seemingly at random but nevertheless forming an ordered structure, whose underlying motifs are not apparent at first glance (and may never become so) but that are most definitely there. One could almost suggest a touch of hallucinatory madness in this album.
The feeling of chaos is intensified by the use of diverse and varied material such as vintage synths, theremin, acoustic banjo and percussion as well as the influences that can be felt permeating the music and which range from jazz, to old-school industrial, pop, delta-blues (there’s a definite touch of Captain Beefheart in a couple of songs) and early experimental electronica.
If there is an element of randomness to “Spray on Sound”, it comes from the sum of the songs and the disparity between many of them, not from the individual songs. In each song, the end result is anything but random and one gets the feeling that Ann and her collaborators instinctively know what they are doing and what the end result should be, no matter how confusing it might seem. And this brings up yet another apparent paradox to this album, namely that, despite all the electronics present, it is an extremely humane and down to earth piece of work, extremely cheerful and with a strange innocence to it.