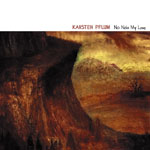 Karsten Pflum presents “No Noia My Love”, which showcases a wide range of electronic styles. The overall mood of the album is quite mellow, for the most part, but some of the tracks, as evidenced in “Dansk Notebook Center” and “Imun Card”, bring in strong and chaotic beats and kicks. I would be hesitant to claim that this is music to which you would just chill out and relax at home or at a house party; instead, I would classify it as mellow electronic dance music.
The artist brings in some dubstep flavor on “Capstone Switch” and “Mimer”, and shows a bit of funkiness on “Ipkip”. He also incorporates ambient atmospheres throughout much of the release, especially on the title track and “Muntermacher”. “Dansk Notebook” is probably my favorite due to its distorted rhythms, wobbly bass and breaks, but with soft ambient sounds interspersed throughout.
When listening to this disc, at times I wondered if I was listening to two different artists; however this is by no means a negative aspect of this release. Each track seamlessly flows into the next, so that the entire album comes together as a single, cohesive piece. Pflum makes excellent use of organic-sounding samples throughout the album, which add a nice, human touch to the songs. Pflum also avoids the pitfall of making the music sound repetitive, as many songs are very engaging, but there are times when tracks lose their focus and drift off. This is a strong release from an artist I was previously not at all familiar with.