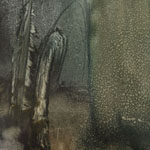 Ferial Confine is the alias formerly used by Andrew Chalk in the 1980s for his noisier endeavours. “First, Second and Third Drop” is an album that was recorded in January of 1986 (a year before I was born) and remained unreleased until now. After giving this disc several listens, I have to wonder why it wasn’t released much sooner!
Although not as mellow as most of the work for which Andrew Chalk is known, “First, Second and Third Drop” is definitely not a barrage of noise, and really has little in common with most of his Broken Flag label-mates from back in the 1980s. The comparison that immediately comes to mind listening to this album is Organum’s material from around the same time period, something which makes a bit of sense since Andrew Chalk was involved in Organum for a time. The first three tracks definitely have the metallic, tense atmosphere that I’ve come to associate with Organum’s earlier material – high-pitched scraping noises, creaking metal and general uneasiness. The fourth track, “It’s Passed,” mellows out and seems to bear the sound of some sort of wind instruments (possibly flutes). It has a bit of a darker feeling than a lot of the stuff I’ve heard from Andrew Chalk in the past, and I think that might be part of why it stands out for me. In fact I think “It’s Passed” is my favourite track of the disc, though I enjoy listening to the whole thing all the way through. The album ends with “The Sky Collapsed,” which returns to the feeling of the opening three tracks, but with a harsher feeling to it. This certainly would be a fitting soundtrack for the sky coming down upon us.
When all is said and done, “First, Second and Third Drop” does nothing to disappoint. In fact, I feel it offers almost a “missing link” between Mr. Chalk’s earlier noise work and the shimmering ambient tones he’s known for today. It offers a balance between uneasy, tense atmospheres and more soothing material that still has a somewhat darker feel to it. As usual, this release is best when listened to all the way through, and with your full attention.