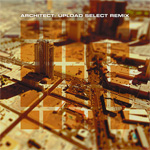 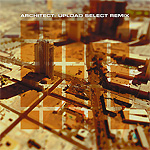 Disclaimer: Maybe it would be hard to find someone more suspect to review the new remix CD from Architect, since I’m a profound admirer of Daniel Myer’s work for many years now, having accompanied his path by more known projects such as Haujobb, Destroid, Architect and now Covenant, but also in those less known and more temporal such as Cleen, Cleaner, S’Apex, Dots & Dashes, HMB and Newt, just to mention a few.
For “Upload Select Remix” Daniel Myer invited some friend projects to make a review of a track from the ravishing “Consume Adapt Create”, which, in his own words, is a unique blend of atmospheric IDM, cinematic samples, powerfully distorted sequences, ramming electro grooves, razor-sharp breakbeats and haunting ambience.
It’s not easy to remix a track that is already an optimal work, full of intricate structures and complex rhythms pushed over the limit in an investigation of sound that always attempts to establish a new state of the art. Indeed, I often identify Architect as Myer’s test tube for experimentation with new forms of composition that take the limits of human knowledge about sound a step further.
Most of the fourteen remix tracks on “Upload Select Remix” exploit the most striking elements of each original track and their relocation in more four-on-the-floor structures. That is the case of remixes from André Winter, For a Space, Re-drum, Repair, David Partido and Dsx. The last one is perhaps the least danceable of this set, with his retro-style ’80s electronics. The others are all different inputs of adrenaline and cadenza to the original compositions, shaped to accomplish the demands of more enlightened dance floors.
Subheim picked some melodic elements from the originally tense “Attack Ships on Fire” and turned it into a new quiet, sexy and melodic electronica track. Some others gave even more strength to some already vigorous compositions, by de-constructing elements and rearranging them in a new mutant way. That’s the case with Stendeck, Brazda Lui Novac, Hecq, Keef Baker, Enduser, Vndl and Comaduster. From this set, I must highlight once again a remix of “Attack Ships on Fire”, this time by Keef Baker, letting us suppose that the secret, if we detest the brilliant ambient craftwork added by the remixer, may lie in the original version. We would like to highlight as well the full-power hardcore remix by Enduser and the well chosen closing remix from Comaduster.
Definitely a remix CD appealing to those who already know “Consume Adapt Create”, or for those who haven’t discovered it yet and are in need of extra motivation.