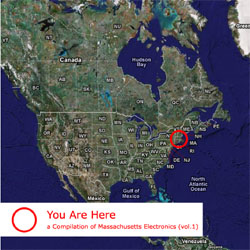 Compiled by David Dodson (alias Deftly-D of Voidstar Productions) for Connexion Bizarre in September 2008. RMS leveling by Mark Alan Miller.
Special thanks to Bill T Miller and Mark Alan Miller for going above and beyond the call. 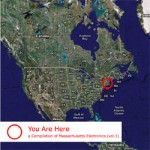 “You Are Here: a compilation of Massachusetts electronics (vol.1)” is NCB005