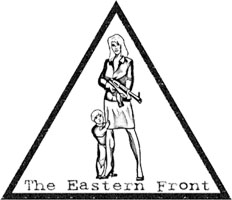 Israel is probably not the place where one would normally expect to find a record label with a catalog spanning martial music, darkfolk, industrial and noise experimentalism. And yet, that is the kind of material being released by this young label (and T’an! Kaven!! Ash!!! its noise/experimental side-label) since its inception roughly a year ago, often as numbered limited editions with eye-catching variant packaging which easily makes them collector’s items to be appreciated. 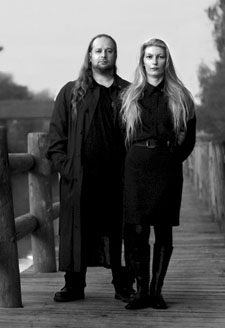 1 – How and why did you come about starting The Eastern Front?

First of all we’d like to thank Connexion Bizarre for this conversation.

To be honest The Eastern Front was commenced by chance. We did not plan to establish a record label, we were dealing more with organization of small events in Israel but Albin Julius’ offer to release his compilation “Speech Of Truth Will Be Eternal” (by special reasons), led us to start working in this field. Having released the DB compilation, we were still not sure we would deal with music production but, at that moment, our friend and talented musician S. Friedman finished composing his first full-length album of a new-born project, Silence and Strength, and gave it to us to get our opinion. We loved the music: the mix of classical neofolk – so rare in Israel – and dark ambient sounds fascinated us and we decided that it could not lay unpublished. It was our second release and actually since that moment the history of The Eastern Front as a label begins.

2 – When you started The Eastern Front, were there any labels that you could say were a reference/inspiration for your efforts?

Good examples for us were already active Israeli labels like Topheth Prophet or the Austrian WKN – we may refer them as our Godfathers!

We also noted that many labels have started their activity rather recently – in 2002, in 2003, even in 2004 and we realized that it was not such a complicated and mysterious process as we thought before (it is not a joke to establish your own label though!), so we took a deep breath and declared that a new label, The Eastern Front, was just born in Israel.

3 – Almost mandatory question, how did the name “The Eastern Front” come about?

Long before we decided to establish a label, we were in correspondence with Albin.Julius. We received a letter from him with a subject which read something like “Nothing new on the Western Front. What’s new on the opposite side?”, and when we started to think about the name of the label that phrase instinctively came to mind and suddenly we realized that “The Eastern Front” is that very name which our label must carry. Too many things stand behind this name: the history of our families, our roots, the history of the country we were born, specifies of the country we live in now.

4 – Since the inception of The Eastern Front, are there any events in the history of the label that you’d consider as particularly relevant, from difficulties and setbacks to successes?

We do not see any particular difficulties. Today, establishing and managing a label is not a very difficult thing, though it demands some certain abilities. We think that managing a label is a very responsible thing and it is very important to realize this responsibility. The label’s reputation, successful communication with partners and customers and achieving some level of respectability can not come from nowhere, it’s a labor and it’s a hard labor and we think that everybody who starts business (and it is a business!) must realize clearly how hard one has to work. Nonetheless, we do it at, for our pleasure and any difficulty is shaded with satisfaction and gladness about what we are dealing with…

5 – So far what would you consider as special highlights (or successful) releases and artists in the history of The Eastern Front?

We think (and for sure you expect such a reply) that every release and every artist is important and particular for us. But indeed there are always certain releases which can be considered as highlights and the most important (in personal sense) release is “Letters From The Front”. It was released in very small amount of copies, in CD-R format, but its meaning for us is more important than any professionally made release. It took a lot of time to think over the concept and we are very satisfied with the results. Fantastically good compositions by Westwind, Storm Of Capricorn, Neon Rain and Silence and Strength, written especially for this project, made “Letters” conceptually complete. It was not a compilation like many wrote and called it, it was a conceptually built project based on a certain idea… It was our personal “in memoriam” to our families…

6 – Are there any releases in particular that you would recommend as good ‘introductory material’ to the The Eastern Front label?

We would say that we choose for publishing only music we personally love – it can be martial, it can ambient or it can be darkfolk. Our subdivision, T’an! Kaven!! Ash!!!, deals with experimental or noise music. So it is not easy to recommend something in the sense of introduction, but anyway we would recommend releases such as Agnivolok “Cherries”, “Letters From The Front”, Bleiburg “Way Of Crosses”, Phragments “The Burning World”…

Hope it does not sound too much presumptuously but there is nothing to regret about and nothing to change. The only thing we can regret is a catastrophic lack of time and, due to this reason, the impossibility to fulfill everything we could do if we had time. But that is another story and is irrelevant to this question…

8 – An obvious question, but what is The Eastern Front’s ‘relationship’ with the Internet? From promotion tool and digital sales to file sharing and piracy, how has it affected you?

The Internet is probably the greatest and most positive invention of human race in XX century. It gives unlimited opportunities and, just thank to its existence, we started our label (like many other label owners did). It wouldn’t be possible to promote, find contacts, present CDs (in multi-meanings), etc without it. We still receive paper catalogues of large metal labels, like Nuclear Blast or EMP, by regular mail and it looks somehow unreal… Even in the sense of financial expenses, as it costs money to print and send paper catalogues, how could we do it? The Internet allows us to make the same promotion efforts but for free.

As for piracy, indeed it is a dark side of the matter. To struggle with piracy is a useless business, it will progress more in the nearest future but maybe there is a positive point: maybe it increases the interest for an artist?

A netlabel is not totally a bad idea… but not for us! We see CD or vinyl as a real physical object and not as virtual thing… Though we foresee that, in the future, music labels will be replaced by netlabels. But, for as long as it will be possible, we will keep producing regular CDs. Easily accessible music via downloading may be an advantage but it is obvious that something essential will be lost.

10 – Perspectives for the future, what lies in the horizon for The Eastern Front? Can you share some long-term goals and where would you like to see the label heading to?

We sincerely hope that we’ll keep doing what we do now and that there won’t be any serious obstacles which can make us cease the activity of the label. We want to release as much music as possible by talented known and unknown musicians.

The answer is based exclusively on our own personal musical tastes and passions. Most of music projects we love are not in need of recommendation or advertising! In our opinion, there is a very powerful and interesting scene developing in Poland and Hungary nowadays, alongside with a huge amount of musical projects and labels from Germany, Austria, Italy, UK, etc. It is not easy to specify some artists or labels, the only and the most correct our recommendation is to listen to as much music as possible…

We’d like to thank once again Connexion Bizarre for the interest shown for our label. We sincerely hope that our work is not useless and that collectively we can keep this scene alive!

The Eastern Front
T’an! Kaven!! Ash!!! – the experimental subdivision of The Easten Front