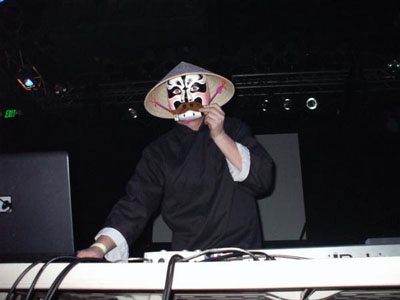 Los Angeles’ Shane Talada has gone by many names in electronic circles, first as the lead singer of the coldwave industrial group Screaming To God (aka STG), then later as The Operative, and now best known as Marching Dynamics. Talada just released his second Marching Dynamics CD, the cryptically titled “Workers Party of Haiti” on the celebrated label Hymen Records. Matt Fanale shot the genre-bending artist some questions, digging up a little information on Talada’s process, his influences, and why he’s changed names over the last few years.

1 – I’ve always liked that you make electronic music but it feels very organic at the same time – almost amorphous. How do you usually start a track, and do you ever have a distinct structure in mind or do you just let it flow and see what you come up with? Do you generally start with a particular piece of hardware to inspire tracks?

Thank you, Well, I think that the “Organic Feel” may come from the fact that this project is 99% hardware based with everything being sequenced in real time… As for track creation, it varies, at times it may be a sample from a film, or it could be the pads and atmosphere’s that come from a rainy day, or the beats and bass lines from a summer’s day that start the process. As for that inspirational piece of hardware…that would have to be that brain that’s in the cupboard above the kitchen sink.

2 – Who are some of the artists and styles that influenced this release, as it seems like a lot?

Hmmm… Well, if I told you, then I’d have to kill you. Are you ready for the death? It’s just a bunch of really old obscure situations, places, and music, none of which would make any sense… From finding yourself curled up inside of a massive bass bin in the middle of an illegal break-in warehouse party, or capturing that unheard voice on a digital recorder and the places that happens, or lots of the WIRE side projects Duet Emmo and He Said. Those are what come to mind. Amongst the personal aspects that were aligning themselves with the studio sessions at the time… Lots of different things. I guess you’ll just have to listen and see.

I got sick of trying to write myself into a corner. I wanted to leave the gate open and wander around the place a bit more. By the way, at the time, I had no idea the name had anything to do with marching bands themselves…!

To better answer your question: The Operative alias was shelved because it had nothing to do with the sound, process, and feel of Marching Dynamics. The Operative’s sound wasn’t really a natural output for me, while the MD sound was.

Everything is permitted within Marching Dynamics. The Operative just DJs & remixes now. 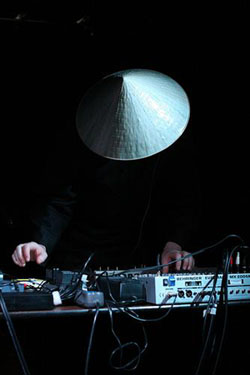 5 – Live MD/Operative performances always seem to incorporate a lot of anonymity, with cool masks, kimonos, etc., and nobody seeing your faces as you perform. What’s the purpose of that and when did you decide to do it?

It all stems from growing up and seeing what Ogre would do in the early days of Skinny Puppy. Not so much that he wore masks but his theatrics. I adopted the masks as they were an easier affordable way to distract the listener from the person/persons on stage & tie together the anonymity with the music to create a more surreal atmosphere. In fact, early STG shows involved a lot of masks, but there was nothing “surreal” about a STG show, more like chaotic violence. We used to shoot arrows into our audience while releasing the wild baboons upon ’em… Although, I guess one could find the surrealism in that as well… So never mind, I guess.

6 – Where do you get your title inspirations?

Books, the voices in my head, the situations I’ve found myself in, and those things that go bump in the night.

7 – Since outside of the occasional sample your tracks are vocal free, the titles are appropriate and add another dimension to think about with the music (just like the album titles themselves) and I’m curious how you decide on them.

I’m never without a pen and paper, or a sharpie, on hand; so, when a string of words, or a phrase that appeals to me shows up then I’ll jot ’em down… That and you never know when that friend of yours who’s had a little too much of one thing or the other will say that chisel-worthy phrase…

Eventually they all end up in a mass of pages from which I can pick and choose.

8 – What’s the status of the Mechanizms label and is anything in the works for release?

It’s brooding in its cave at the moment, readying the birth of a triplet of new releases this year.

9 – Do you plan on taking Marching Dynamics on the road at all this year outside of Montreal’s Kinetik Festival?

10 – Finally, to touch on your first musical endeavors, you mentioned some possible new STG material a while back. Is there any chance of a new CD from your first band?

It’s a slow on going process, but, there are tracks in the works. =)