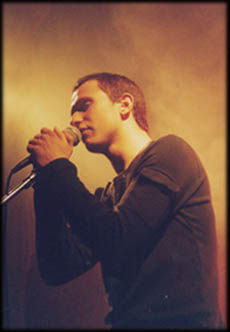 After the release of the MCD “Aperi Ventes” on the label Purple Moon Records, Heyaeb released their first full-length CD “Sisterly Love” in 2001. In this last recording an evolution from Heyaeb’s earlier works is noticeable. “Sisterly Love” is more worked out, more melodic (even though still highly danceable) and keeps the highly emotional nature that so characterizes this project.
Heyaeb is essencialy the solo project of belgian musician Joachim Claeys. An intelligent hybrid of a wide variety of musical styles, Heyaeb’s work cannot be placed into any single simple cathegory.
Live Heyaeb performances feature an enthusiastic ensemble, consisting of Claeys and several guest musicians, that conveys a feeling of energy and spontaneity to the audience with a great musical performance and an array of improvised humourous acts.

C.B. – Starting with historical perspective, how did the Heyaeb project begin?

A long time ago I was playing guitar in a rock-formation called “Batteries included”. One day the drummer had an accident with his motorbike and he died. After a certain period I decided to start again making music, this time with programmed drumpatterns. Jo De Paepe helped me to perform the music live: Heyaeb was born. Later the music became more and more electronic, but still with a lot of melodies.

C.B. – How would you characterize the evolution of Heyaeb?

It’s an evolution from rock band to electro/synthpopformation. The technical aspect became more and more important and the accoustic instruments were only used for live-performances.

C.B. – What kind of music do you listen to nowadays and what would you refer as current influences (music styles & bands)? 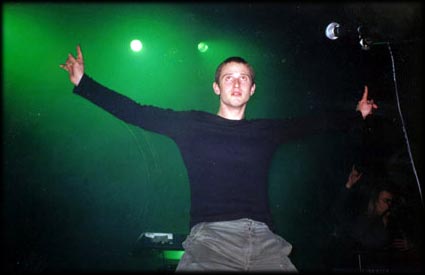 C.B. – In what direction do you see Heyaeb moving, how do you predict it to evolve?

I am now working on a new album, that will sound more powerfull, more dancable with a lot of trance and drum-n-bass influences. I suppose there will be no accoustic guitar songs on the next album.

C.B. – At least in my opinion, there is a rather interesting paradox in your work. Most of the songs’ lyrics range from the introspectively sentimental to the somewhat sinister (without ever touching kitsch) while the music is rather cheery so that in the end the overal effect of Heyaeb’s songs is quite uplifting. Would you care to comment on this?

It’s difficult to give an explanation for this because I am writing the music AND the lyrics. Probably I’m schizofrenic… But the most important thing is always the sentiment, I’m really writing what I’m feeling, even when it’s ridicule.

C.B. – It is a given fact that Heyaeb is pretty much a solo project, at least as far as studio work goes. How do you set about to make the songs? Do you follow some scheduling for musical work or do you work on the spur of the moment?

Most of the songs are created in my head. Afterwords I try to search additional melodic lines with my guitar. At least I start programming. Often my best friend, Chris Verleye is helping me with the programming or the lyrical part. He has very good ideas.

C.B. – Do you have any formal music training?

Yes, at the age of 11, I started following music school. I played the piano and as second instrument the guitar. Afterwards I considered the received knowledge was not necessary to make music.

Yes, I would like to work with a lot of other musicians, because I know I can learn a lot from them. Sometimes I become crazy while mixing or recording a song. It is so difficult and it’s better to use more ears. 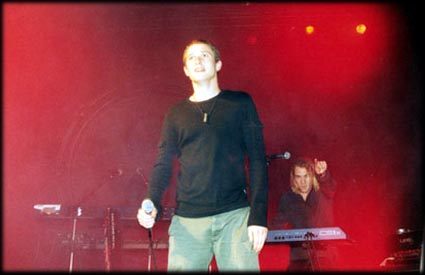 C.B. – Also on the topic of live performances, at your recent gig at Euro Rock 2001, we found you guys to be rather exceptional in that you conveyed a great feeling of energy and spontaneity. Do you, by any chance, rehearse any theatrics for your shows beforehand or are those plain improvise?

In the past it sometimes happened that we planned some acts or jokes, but nowadays we get on stage and improvise everything. It’s very important to react fast on the circumstances.

C.B. – If I am not mistaken, you are currently studying. How does that influence Heyaeb’s activity, in particular live performances? Have any possibilities of a tour or mini-tour loomed in the horizon, either as main act or as opening act for any other band?

No, I’m not studying anymore. I have an agree in Criminology, but I’m working now in a commercial environment.

C.B. – Your full-length CD “Sisterly Love” came out not some time ago. Do you already have anything in the works as far as new material goes?

As already mentioned I’m working hard on our new album that will carry the name “Overkill”. I already finished 6 songs.

C.B. – Remixes are something that is popping up from time to time, as a source of “new material” and also as a possibility of collaboration with other musical projects. Are there any possibilities of us seeing Heyaeb being remixed by other bands or remixing other bands in the coming future?

A difficult question. If we ever get the opportunity to be remixed by a band we adore, we will collaborate. On the other hand we already remixed other bands (a lot of technoprojects: Foochow, BrainFX, Neuronet, Diskonnekted…)

C.B. – Nowadays, preparing new material seems to be a necessity in most music scenes. A lot of audiences seem to have short attention spans to properly appreciate the music being published which, coupled with the huge number of bands around, means that sometimes bands have to churn out as many releases as possible to keep afloat and not be so quickly forgotten. As a consequence, a lot of the material being published can easily be said to be sub-standard and all the noise generated makes it more difficult for talented projects to be properly noticed. What do you think of this current state of things and do you think that this has had any major effect on Heyaeb’s notoriety?

Once signed on a record company there’s always pressure, but we will never hurry to release something. All good things come to those who wait… 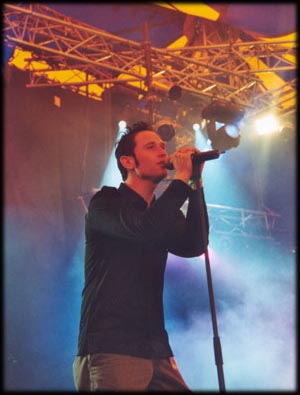 C.B. – Also related to this what is your opinion on the current situation of the “synthetic music” scenes (electro, industrial, trance, techno, etc…) as a whole? Some people are already beginning to speak of stagnation and lack of new emerging talents, where do you see this heading?

Yes, there’s a lot of music that repeats itself. But often I recover very interesting new songs. Mixtures and sounds I never heard, for instance Faithless, Underworld, The Prodigy… But I have the opinion music should not always be original, for instance when I listen to Novastar I hear nothing new, but the feeling in their songs is strong enough to adore it. On the other hand other projects are probably original, but sound like shit.

C.B. – Going a bit towards the naming of things… the choice of the name “Heayeb” for your project may give some suggestions as to political opinions having had (or still having) some sort of influence in the material produced. However, that is not evident from the lyrics. Was there any particular reason to select this name? Are you involved in political activism of some sort that might have influenced the choice of the name?

In the beginning of Heyaeb, the texts were politically inspired (a lot of critics on society), but nowadays I only write songs about what really turns me on, personal feelings. But we kept our name of course…

C.B. – Closing, we’d like to thank you for your time. Do you have any final words or final requests? ;-)

The rest is silence… 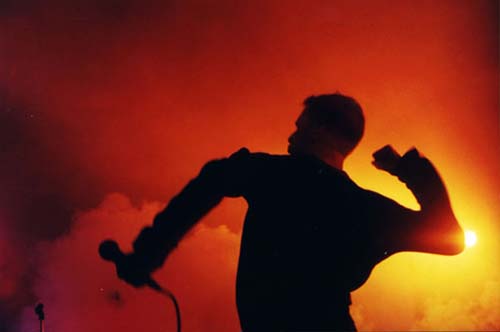