The brainchild of Peter Lee, a DJ from Providence, Rhode Island, Force Of Nature has been an active label for over five years. Closely associated with the Rhode Island Noise/Industrial festival, and now Forced Distribution, Force Of Nature is an outlet for quality electronics, having been home to releases in genres that range from dark ambient and power eletronics to breakcore. 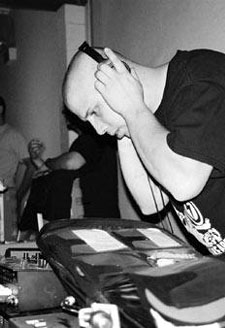 1 – How and why did you start Force of Nature Productions?

Force Of Nature was originally created as a counterpart to my radio program “a dark and tranquil place” on WRIU in Kingston, Thode Island. This program has been on the air for 10 years now. I was receiving some amazing music from some new-starting labels (Ad Noiseam, Frozen Empire Media, etc) so I decided to release a compilation showcasing some of the bands that were played quite often on my show, and it came out in the form of the “Dark Transmissions” compilation.

At about the same time I also decided to start booking live shows, so Force Of Nature Productions was born. I am now on my label’s seventh year, along with the show promotion, including the sixth edition of our Providence Noise/Industrial festival.

2 – When you started Force Of Nature Productions, were there any labels that you could say were a reference/inspiration for your efforts?

Since my radio program was varied, I was drawing from a vast pool of references, from Cold Meat Industry to Cold spring, as well as labels such as Ant-Zen and Hands Productions.

I had an infatuation on the destructive power of nature, as well as its ability to resurrect, heal and start all over again. It can be dark, happy, vengeful, or calm all in one day. Since I had such a wide variety of interests in the scene, I felt this was a befitting name.

Also I had the concept to release 12″ records with the general theme of a historical disaster, which was to try to accomplish the sound of that said disaster. The [Law-Rah] Collective’s “Vesuvius” LP was the first of this series, and pretty much embodied my idea of the series.

Our yearly Festival in Providence has been the main thing Force Of Nature has really worked on. Many amazing acts have come through and it is America’s only 3-day industrial festival. It is on its sixth year.

I do have to say that having a release schedule that sits firmly in the dark ambient /noise/power electronics realm, and then having most of my events/contacts be in the rhythmic noise, breakcore scene is an interesting problem. Most people either know Force Of Nature for one or the other, and there really isn’t a very big crossover in my two audiences. I feel like it has split my promotions, and caused issues at time.

5 – So far what would you consider as special highlights (or successful) releases and artists in the history of Force Of Nature Productions?

Actually I am very happy with all the Force of Nature releases. I have to truly love something to release it. We have had some amazing releases. From the Most Brutal death pile imaginable, the first ever Skin crime LP, The First Grunt splatter LP (as well as his first attempt at PE), and many more.

6 – Are there any releases in particular that you would recommend as good ‘introductory material’ to the Force Of Nature Productions label?

Well if you want to see where Force Of Nature is going, the best bet is to stick around. We are just releasing Telepherique’s “Slow Motion” in a couple of weeks, and the Scrape.dx/s.o.r.e.h.e.a.d. split LP should be out soon.

As for where we have been, I would highly recommend the [Law-Rah] Collective’s “Vesuvius” album, The Show Of Exaggeration CD (which in my opinion is very underrated) and c2’s album.

Actually my only regrets were learning about the obviously silly divisions in the scenes too late. I have never understood why someone can’t enjoy a dark ambient album, then turn around and listen to Synapscape or Whitehouse. I built the label with my taste in mind, without realizing that others wouldn’t see it as open-minded, but as not hard enough, or noisy enough, etc.

8 – An obvious question, but what is Force Of Nature Productions’ ‘relationship’ with the Internet? From promotion tool and digital sales to file sharing and piracy, how has it affected you?

I feel like people rely on the internet too much in their life. I have seen promoters wonder why nobody shows up to their shows, because they did tell all their MySpace/Livejournal friends. Promotions with a new release or a show or anything should be carried out with the word-of-mouth, networking in person, physical flyers, as well as the internet. If not you become one of the 1000 spam messages daily.

We may be moving into digital sales. I don’t like the concept, as I am a physical collector, but you have to evolve. We will always release in CD/LP format though.

As far as piracy… Well, it’s stealing, period. File sharing is stealing, period. There is no black and white there. If the release is still available, people should buy it. You can use it for your own personal enjoyment wherever. It’s yours. The minute you put it up on a filesharing client you become a cog in the wheel of the destruction of the underground music culture.

Net labels… Eh, to each their own. I don’t spin MP3’s. I only buy records and LP’s. Records have been in decline for a long time, but there will always be a DJ/collector market.

10 – Perspectives for the future, what lies in the horizon for Force Of Nature Productions? Can you share some long-term goals and where would you like to see the label heading to?

We have just recently opened Forced! Distribution, ideally to bring my interest in Breakcore/Darkstep and such to life. We are continuing to release 2-3 releases on Force Of Nature, but will be doing 12″ singles on Forced!

As far as artists, to me right now Scrape.dx, Liar’s Rosebush, Edgey, are pushing the boundaries of rhythmic noise/idm/breakcore/etc and each release or live show is just as amazing as the last. I can’t recommend them enough.

As far as labels, Ad Noiseam definitely, as well as Hymen/Mirex. Each one in its way has been pushing the envelope of the scene. I feel they are moving in the same directions as my taste in music, pretty evident when both have a large artist roster at each year’s Noisefest.

Information about this year’s festival will be up shortly. It happens Aug 31st, Sept1st and Sept 2nd in Providence, Rhode Island. There are some amazing acts confirmed, such as Noizecreator, Dj Hidden, Evol Intent, Xanopitcon, Scrape.dx , Edgey and many more.

It will be available to be seen at the Force Of Nature Website.