A veteran of the European electronic music scene since the late 70s, UK based sonic explorer Ian Boddy has produced 13 CDs on his Something Else Records label. Emerging from the post TDream generation, Boddy has carved out a distinctive position as an independent composer and performer. As well as his CD output he has also released several library music CD’s for deWolfe and is well known for his pioneering work with the sample CD company Zero-G.
His reputation growing as a producer and composer, Boddy decided to set up DiN in 1999 to facilitate his desire to work with musicians from several different areas of modern Electronica.
— from the DiN website 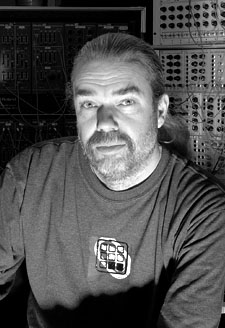 1 – How and why did you come about starting DiN?

DiN was started in the spring of 1999 with the launch of the first 3 discs simultaneously. Up until that point I had been releasing my own music via my own Something Else Music label but I wasn’t happy with how this had evolved. The discs came out infrequently, there was no design style and I was finding it hard to market them. Also I was starting to enjoy more the collaborative process and I wanted to expand this activity. With all this in mind I decided to launch DiN with a far more professional approach than SEM.

2 – When you started DiN, were there any labels that you could say were a reference/inspiration for your efforts?

Possibly the Fax label run by Peter Namlook. Although the music on DiN has some cross-over with Fax I think it has gone in a very different direction. One thing I liked about Fax was the collectability of the titles and with this in mind I also made all DiN releases limited editions (so far they’re all between 1,000 – 2,000 runs dependant on the title) and made sure there was a definite DiN design style.

3 – Almost mandatory question, how did the name “DiN” come about?

Well firstly, like with Fax I wanted a short 3 letter name that was easy to remember. This meant I could make the catalogue numbers contain the label name which I think looks nice. It was also a slight joke in that of course in English din means a harsh, horrible noise. From a very early stage I came up with always writing it down as DiN as this was the logo design.

4 – Since the inception of DiN, are there any events in the history of the label that you’d consider as particularly relevant, from difficulties and setbacks to successes?

In 2001 iNDEX01 (DiN10) which was a sampler disc covering the first 9 releases was used as the subscriber cover mounted disc on the well respected music magazine The Wire. It’s also been nice to get some very well respected names on DiN such as Chris Carter, Robert Rich, Tetsu Inoue to name but three. There’s not really been any set backs other than the perennial struggle to try to sell more CD’s!

5 – So far what would you consider as special highlights (or successful) releases and artists in the history of DiN?

In terms of sales as well as fun to record my releases with Robert Rich and Mark Shreeve (recording as ARC) stand out. Musically they’re poles apart but both have been artistically very satisfying to release. It’s also good though to give some not so familiar names a platform to release their music and artists such as Surface10 and Parallel Worlds are two good examples. The latest DiN release Dervish (DiN33) with Markus Reuter also has to be a highlight in that we have lavished such a lot of care and attention in it’s production and it has taken me musically to some very different places.

6 – Are there any releases in particular that you would recommend as good ‘introductory material’ to the DiN label?

Well the 3 DiN sampler discs, iNDEX01/02 & 03 are compilations that each cover the previous 9 titles. They are all done as continuous ambient mixes and as such are a great taster for all the releases on the label (well at least up till DiN29). They all sell at a budget price as well!

Probably not! It would always be nice to sell more CD’s and have more recognition but being realistic the music on the label is never going to be main-stream. Indeed that was never my intention and my musical career has other income streams such as my library music that keep me afloat allowing me to indulge my musical tastes with DiN. This is probably a good thing as then the music comes first and doesn’t get bogged down by purely business considerations.

8 – An obvious question, but what is DiN’s ‘relationship’ with the Internet? From promotion tool and digital sales to file sharing and piracy, how has it affected you?

Well first and foremost I couldn’t do what I do without the internet. From being able to communicate via E-mail/Skype etc to showcasing my products & music via web sites the internet itself is indispensable. I’ve also embraced the distribution and sales of the DiN label via music stores such as iTunes, EMusic & MusicZeit. That last name may not be so familiar to people but that is a music download site I have set up with two other business partners. It mainly caters for electronic music and has some features that I wanted to see, the most important being the availability of FLAC files of the albums (FLAC is a lossless format and reduces the file-size by 50%, but when uncompressed is exactly 100% the same as the full bandwidth audio on the CD). As for piracy, well it’s stealing – simple as that, but there’s nothing I can do about it so I choose to ignore it.

Well certainly CD sales are falling and there seems little anybody can do about that. I don’t think they’ll disappear all together just yet as there’s still a reasonable number of people out there who still prefer the collectability of a physical product. However I have launched a sub-label of DiN with 5 releases out so far that are only available as downloads. Some of these are taken from some of my more experimental concerts and as such probably have limited appeal. However releasing them this way is a good way to make them available when otherwise they probably wouldn’t have made it to CD.

10 – Perspectives for the future, what lies in the horizon for DiN? Can you share some long-term goals and where would you like to see the label heading to?

I think DiN has built up for itself a very good reputation for innovative electronic music and is continuing to attract some well known musicians – the next release Arcadia Borealis (DiN34) for example has the Norwegian ambient musician Erik Wøllo in collaboration with Bernhard Wöstheinrich. I’m currently planning a concert with Mark Shreeve as ARC in Philadelphia, USA which will hopefully be coming out as a live album. In 2010 I’m also hoping to work with the well known American ambient musician Steve Roach. So I hope to continue this expansion of the artists on DiN and all the interesting partnerships and cross-pollination of ideas that are evolving.

Tricky! Let’s look at something non-electronic – I’d go for the Icelandic band Sigur Rós. I just love their sound and how they’ve transcended the normal rock group format to arrive at somewhere all together far more interesting.

Well next year in 2010 I’ll have been working in the field of electronic music for 30 years. I can hardly believe it but it’s still wonderful when composing music either on my own or in collaboration with other artists to feel the thrill of something new being created.