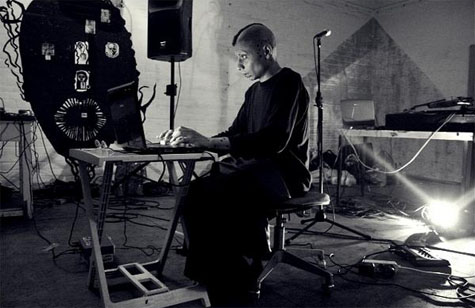 C-Drík Fermont, for those of you who don’t know him yet, is a Belgium based musician, producer and sometimes gig organizer and DJ who started to record industrial and noise music in 1989 with the band Črno Klank and since then played in many other projects and under different names such as Axiome, Ammo, Ambre, Dead Hollywood Stars, C-drík, Kirdec, Moonsanto, Tetra Plok, Elekore, Logatomistes and so on, and collaborated live or studio with many artists, in many styles such as electro-acoustic, noise, improv, digital punk, breakcore, electro and dark ambient.
He has released more than 30 records for now and today, he’s more active than ever, and keeps travelling around the world to perform gigs as a real globe-trotter.

1 – Your own label, Syrphe, has been up and running for a few years. Could you explain to our readers how and when it was born, and which are its current activities?

Syrphe was born in 2002, and was in the first place meant to release my first solo album, titled “Dissolution”, as a co-production between the Canadian label Hushhush and me. Then I wanted to release some other stuff on Syrphe, but I didn’t because of a lack of time.

It was only several years later, after having been touring in Asia during 6 months, that I came back with the idea of releasing an electronic / noise compilation, untitled “Beyond Ignorance and Borders”, featuring Asian, African and Middle-Eastern artists, released in 2007.

The same year I released a breakcore solo album under the name Kirdec, “Killed by a Coconut”, the first Elekore album (my digital punk band including two Singaporian members, Marc Chia aka Marcos Destructos and Shaun Sankaran aka Mindfuckingboy), “Voluntary Human Extinction”, and then One Man Nation (Marcos Destructos’ solo act) first album, “Rained And It Rained, Bullets It Rained”.

In 2008 came out “Moje ?elo”, an album I made with Aluviana aka Slaven Bandi?, a dark ambient musician from Slovenia I met on the Net and with whom we decided to start a collaboration, then an album from The Klank Of Črno Migs, a collaboration between the Israeli band Seventeen Migs Of Spring, Stefan Friedman’s project Silence & Strength, and my project Črno Klank (the result is a mix between electronics and acoustic or electric instruments such as violin, steel, drums and guitar, and sounds like drone / noise). Then followed “Journeys into space and time”, an album I recorded a few years ago with Contagious Orgasm. It was followed by “Pangaea noise”, a second international noise compilation, and by “Das Gemeinsame Schicksal”, a 3 inch mini CD I recorded under the name Kirdec, which mixes several music genres such as dub, industrial, dubstep, breakcore and ambient.

2 – What about your next releases? Any scoop to reveal?

We’re currently working with Olivier Moreau aka Imminent on a new Axiome 12″ vinyl, which will be far different from everything we released before, some people may have a bad surprise (laughs). As Kirdec, I’m working on an album with the French band Le Diktat, which will be be released on the Belgian label Independenza Recordings. And also, I planned to start making a record with Xabec in next March. We had this in mind for several years but never got enough time… We already have some ideas but it will probably contain a lot of improvisation, because we’re going to work together at his place in Leipzig, not through the Net or anything, so I’m not sure yet of how it will sound like, time will tell. What I can already tell you is that it will be a be electro-acoustic music, with field recordings and this kind of things. I also planned to release pretty soon on Syrphe, a new compilation including experimental, electro-acoustic, minimal and even contemporary classical music, from female artists only, who are from Malaysia, Japan, Taiwan, Indonesia and possibly South Korea and China. 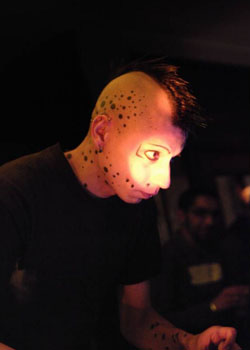 3 – You’re well-known for being a globe-trotter musician who already performed gigs in many countries and keeps travelling around the world… Could you tell us which are the places you have the best memories from, and which are the ones you would like to visit in the future?

That’s a hard question actually, because I’m interested in many regions for several reasons, but let’s say mainly Far-East, not only for music but also for food, and ways of life which are far different from what we have here. I particularly loved China, which is a very open country on arts and opportunities of collaborations with all kind of artists. I also have been very impressed by Indonesia, where the music scene is very rich, especially into experimental music, which exists there since the 60’s. The Balkans are very interesting too, countries such as Slovenia, Serbia, Croatia, Macedonia and so on, even if people there don’t have enough means to develop their art, they have a good state of mind. I could also tell you about the Baltic States (mainly Latvia and Lithuania), South Korea… Too many countries to list here…

4 – I heard you’re currently writing a book about experimental music from Asia and Africa, could you tell us a little more about it?

I started this project in 2005, when I realised how much exciting music was composed and performed by artists which have no ways to promote their work in these regions of the world (mainly China, Korea, South Africa, Democratic Republic of the Congo, and many more). I thought someone had to write about it because almost no one else had ever done it, at least not about those particular countries. So for each country I write about, I try to set up a historical record and I describe the cultural, social, political and philosophical context, and so on… I try to understand why underground music genres succeed to emerge in some places and not in others.

5 – Many readers like to know which are the machines and softwares used by their favorite musicians… What can you tell us about your gear, care for an insight?

I mainly use my laptop and several softwares, sometimes Pure Data and Ableton Live for most gigs, but not for composing. I’d rather work mainly with audio than with MIDI these days. I also have a hardware synth (a Korg MS-2000), effects pedals, all kind of instruments such as a Chinese violin, an electric guitar, a cello, a piano, a Turkish zurna, metal percussions. Many of the sounds I use are actually acoustic, even if they sound pretty much electronic at the end of the process.

6 – You often work on masterings for many artists, which are the last records you work on?

Amongst the last ones, I worked on the “Mutations EP” from The Kilimanjaro Darkjazz Ensemble, recently released on Ad Noiseam, and a CD from Baby Flesh (a power electronics / old school industrial band) which is about to be released on the label Nuit et Brouillard.

7 – One of your bands we didn’t mention here yet is Tetra Plok, an electro / new wave trio including two Belgian DJ’s, Rob and Zoopsie, respectively at machines and vocals, and you… Anything new about this project?

We’re currently working on our next release, which I don’t know yet if it will be a 12″ vinyl or something longer, which will still be in the same range of influences, that is to say electo-clash, minimal wave, with maybe a little old school EBM after taste. It will be released on Textolux, our own label, on which we already released our two first Tetraplok’s vinyls.

8 – What about your digital punk band, Elekore, that was already mentioned in this article?

We plan to release a 7″ vinyl to conclude our period of touring of these past three years. It will still sound like digital punk, with very danceable tracks… On the contrary, our next album will probably sound more doom, still with electronic rhythms but with doom guitars, something rougher than before.