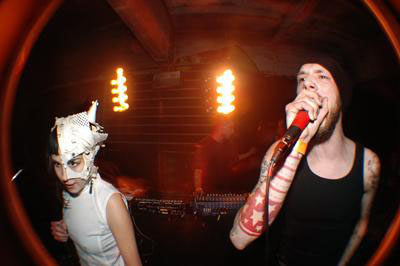 Hailing from Brussels, the three protagonists of this electro-industrial carnival aim to take listeners on a noisy trip to a deranged industrial funfair inhabited by psychotic clowns. Thanks to them, the greatest show on Earth has just reached a new level of derangement with the release of their debut album “Unsichtbare Flecken” on the French label Audiotrauma.

1 – I always start with the same question: let’s put a genre on what you make, how would you define your music?

It is a music that combines tales for quirky children, melancholic melodies as well as heavy and powerful rhythms with apocalyptic, screeching and furious voices.

2 – Why are you called Baxter Lilly? What does it mean?

The name itself doesn’t mean anything. The story behind it is that we were offered a gig before we found a name. We were left with very little time to find one. After a couple of sleepless nights searching, we came up with this name. We like it, it is not frozen in time, people can easily make it theirs and it leaves space for one’s imagination.

3 – Would you agree with me if I describe your music as ‘off kilter/unconventional’?

Of course not! Many people know that… Normality is what is unconventional.

We speak of the norm but I should point out that we speak well of most people who make it as a whole. That is where you’ll find most of the notorious ‘out of step’ people making and creating ‘out of step’ things against our dear code of ethics. Many people like it. As for us, we just do it a bit louder. 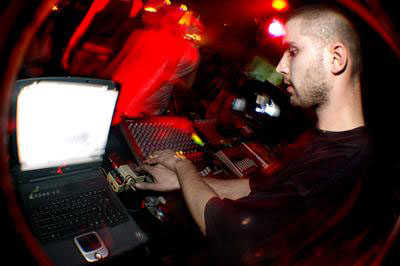 4 – Laurent, you are more known in Brussels under the F.K.L. nickname. Can you tell us a bit more about this project as well as the label Boumcrash?

Boumcrash is a label which began in 2003 and is now on its second release, Baxter Lilly. The first one is a compilation of alternative artists of Brussels such as Melodik Pinpon, F.K.L., Pi.ro, Pavell Nikof, Pneumatik Head Compressor. Yan Francescangeli and Elzo Durt made the artwork, a poster/cover of 63 x 63 cm, you’ve got to get it (collector’s item!). Boumcrash also promotes parties in Brussels oriented towards distorted, convulsive and danceable rhythms. The overall theme is the exhibition of monsters with curious spirits. Welcome to the Freaxshow (and find more info on www.myspace.com/boumcrash)!

5 – Can you tell us a bit more about the alternative elektro scene from Brussels? Were you involved in it before you started Baxter Lilly?

Brussels is a curious, open and welcoming scene; as a matter of principle, politics and music do not mix up. Partying is neither a war nor a demand. It’s just “Listen to the music and have fun – if you don’t like it, go home”.

However, things are changing. Many (alternative) venues are closing down. This is something to keep an eye on and possibly stand up to, as international artists have always loved Brussels because of its hearty welcome as well as the warm audience responses.

6 – Fleur, you use several languages when you sing. Which ones and why?

I mainly use German firstly because it is my native language, also because of its links with history and because I like it… and it is tortuous. Besides, the German language has never been frozen unlike French (by the French Academy). One word has lots of different meanings.

7 – Can you tell us more about the lyrics of “Unsichtbare Flecken”? What are the themes?

The themes I use are usually very heavy or fall on the religionabsurd… Incest, war and consumption. For the next album, I promised myself to write one happy text… Which will prove very difficult. 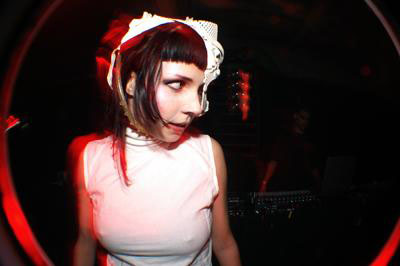 8 – How did you meet Audiotrauma? Why did you sign with them?

We’ve met on the Internet (“Generation Screen”…). Trust and common interests lead to a disc project. This happened at the right time for us as its release is happening at the same time as our vinyl releases and opens wide new possibilities for us. Audiotrauma immediately came across to us as an honest, moral and active label.

9 – What will the future hold for BAXTER LILLY?

10 – If one word could define your project, what would it be? You can give one answer each.