A newcomer to the French label/collective Audiotrauma, Amesha Spenta welcomes the listener into a universe of distorded progressive electronic music with ethno-cultural references to the Zoroastrian religion of ancient Persia.

1 – What is the meaning of Amesha Spenta? What particular meaning do you wish to give to this name?

Amesha Spenta refers to Zoroastrianism, one of the most first monotheist religions to have had a significant impact on the development of current religions.

The Amesha Spenta are the representation of the various elements, but also the personification of powerful spiritual values.

Before all, I found the inner unity surrounding this name really appealing …the earthly, the spiritual and their interconnection.

2 – How would you define your music?

Amesha Spenta is not your first musical experience… Can you briefly present us the development of your art?

I participated in various projects since 1996, all of them being more-less rock/metal/electro/Indus.

I started as a guitarist, and then, little by little, I set about programming. I mostly earned my spurs with Dexy Corp_, for the first EP “JiGgeR” and the album “Fragmentation”. After a passage through Quietophobic, which, up to now, was more of a ‘carry-all’ project than anything else, I created Amesha Spenta in February 2008

In effect, Quietophobic. I’d like to refuel this project a little. It would allow my ‘other self’ to express itself on a wilder register, verging on the aggressive! Guitars and machines at full throttle; I am dreaming of something ultra-violent that kicks up a real fuss, that throws up everywhere!

And why not retrying the experience of making video clips! I am more and more passionate about photo and animation, even if in this domain everything seems so long and boring!

4 – As far as we know, you’ve already worked on soundtracks and short films in particular. What can you tell us about this?

I’ve made a couple of soundtracks for some exhibitions-concert-performances a few years ago. More recently, I’ve worked with my mate Grégoire Orio by directing the soundtrack to some of his videos (by the way I deeply encourage you to have a look at his work: http://www.myspace.com/aphasic) It is an exercise that I am particularly fond of and which I wanted to try for quite a while even if sometimes it is such a challenge that I end up pulling my hair out! In any case, I am only at the beginnings and I’d seriously like to further explore this path.

5 – The creative approach to composing a soundtrack is it necessarily different from composing an album?

Yes and no. In both cases, I personally try to call upon my imaginary, and to some rather visual things… For the soundtracks, I try to work out my ideas as much as I can upstream on final video editing, while being always ready the listen to the person I am working with; this to stick to his expectations and desires as much as possible.

It is a clearly less selfish process than the composition of an album… Also the timing of the images, breathing a second life to the scenario are also elements to consider and which drive me to rework the whole, with a more or less well managed urgency.

This is the opposite of, for example, the “Amesha Spenta” album which was conceived under a much more relaxed, almost slacking, perspective.

6 – A guitarist by formation, you expressed yourself here through electronic sounds. Why?

This is the result of an evolution that now seems quite obvious to me. While playing for Dexy, I recall some periods of time I was feeling a huge need for exploring, for new things that my instrumental parts were not any more able to provide.

Even if I was used to programming, I’ve tried to break my habits with Amesha Spenta and, since then, I am sampling like a madman everything that goes through my hands to create a kind of composition/collage which is in the end sufficiently intuitive and much richer as far as sounds are concerned.

I believe this is what I find attractive and what corresponds to me the most, these days.

7 – Spiritually speaking, where do you stand? Do you believe in anything or anyone? Why?

Sheesh, huge topic! I have to say I really calmed down… Let’s say that overnight I’ve stopped locking myself into an atheism that I was finding too narrow. I took refuge in a sort of agnosticism that helped me in many respects.

This is what I believe to be the very point of this album! To each his own faith and doubts, the key is to find oneself and one’s own spiritual and mental nourishment to be able to rise above the ground from time to time. In my case … Art saves!

8 – What future would you wish for Amesha Spenta ?

Plenty of albums, of live gigs, collaborations, remixes, a lot of sweat and tears! Everything that, in my opinion, any normal musician would hope for!

9 – Despite its recessive and depressive aspects, does the current crisis show any creative or inspiring virtues?

Ahah! Hmmm… Yes, obviously yes. Especially if you take the ‘crisis’ in the most global meaning of the term: geo-political, economic or social.

Even if it means going straight to the wall; I’d rather like it with a lot of roars! And I am pretty sure that some of us will compose the perfect soundtrack for it. 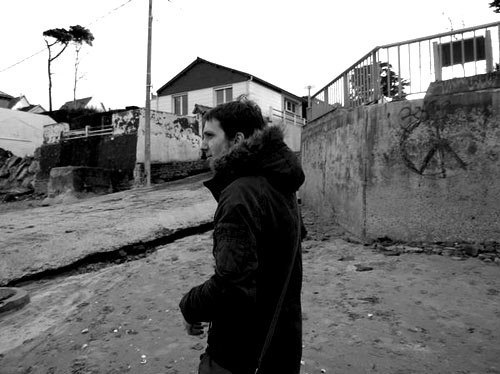 10 – Do you foresee being on-stage to ‘defend’ your project in front of an audience?

Of course yes! Even if changing instrument is not an easy task, I’m looking forward to walking out of my lair to share some sound with people!

To get started with my second album, that is all I demand!