Ann Shenton is one of the founding members of the now defunct cult electronica band Add N to (X). After a period of inactivity, she recently released, on White Label Music, “Spray on Sound”, the debut album of Large Number, her solo project (as much as you can call solo when you have the help of some friends and many friendly machines…).

After listening to the songs on “Spray on Sound”, when I was reviewing notes and information that I had compiled for the preparation of this interview, I sensed a clear effort to join the unexpected and implied transformation in sound (waves) into conceptual forms (matter). What’s the concept behind of “Spray on Sound”? What are you trying to achieve with this album? 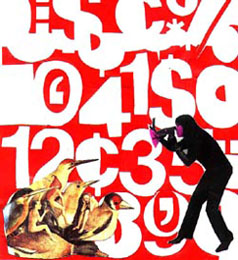 Well I didn’t have a purely conceptual approach to the music that would be too mathematical and too limiting. When using analogue and home made oscillators there is always an element of hysteria. I am always frantically trying to record sounds before the equipment blows up and dies. So in that sense there is always the unexpected, free from pre-conceptions. But I had to make sure this album was a turning point after Add N to X, I didn’t want it to sound like a diluted version of Add N to X. So I used more vocal, banjo / bass / concrete sounds / field recordings, all to create a more human sound to counteract with the electronic. Even though analogue is a lot warmer than digital, I still feel the desire to hear organic sounds along side machines, they make strange lovers.

Can the concept behind “Spray on Sound” be applied to written ideas? Can you give some examples?

I can give an example of track 5, ‘Chronosynclasticinfundibulation.’ It’s a word made up by the sci-fi writer Kurt Vonnegut, meaning to be present at all places in the universe simultaneously. Impossible, unless you are the essence of a chain of atoms that is infinite. It is impossible to conceive .So I tried to emulate this feeling of an infinite structure by using an arpeggiating bank of synths, this sound takes over and occupies the entire space within the track, it is a constant sequence of notes overlaid many times and repeated. The sound reminds me of the NASA experiments with spiders, showing a time lapse film of spiders on cocaine/coffee and spliff, all spinning webs, all totally insane yet trying to make sense of webs spatially, trying to occupy space in their drug induced stupors. Then the track pauses for a Theremin solo, it’s the moment when the track achieves sonic chronosynclastisism, I think, do I talk too much shit?

Going back a little into history now… How did you start your music career?

I found an ms20 synth in the rubbish behind charring cross road in London, seriously. Everyone thinks this is a myth but it really happened, took it home. Plugged it in, got electrocuted and fell in love. Before that I did things at school like violin, cello and guitar: it was no good. The only thing I could have a relationship with was the synthesiser. It has the same temperament as me, erratic, unreliable etc.

What are your main cultural references? Do you use those references in your work?

Radiophonic workshop, Daphne Oram, Delia Derbyshire, Bruce hack, Michelle Polnareff, red wine, pink jazz, blue Monday, Captain Beefheart, prog rock, prog tronic, rock tronic, Archigram (a 1960’s group of thinkers/architects).
I suppose I do use all these elements in the music, whether I want to or not, some things are so developed in your personality that it is hard to escape from them, like what makes you laugh, what makes you sick.

I know that you have been here in Portugal, more particularly in Lisbon. How was that experience?

Well… I love your vinho verde, and ‘perceves’ are so perverse (you know the shell barnacle). I just hope the football hooligans don’t ruin Lisbon. I will be ashamed (again) to be English.

Can you tell us something about your experience with “Add N To (X)”? Why did this project come to an end?

We just hated each other so much, it just couldn’t go on, too much fighting and smashing up equipment, yeah, very Rock’N’Roll… Barry used to smash up really beautiful synths, it was a terrible waste. We all had different musical directions, and we changed too much. 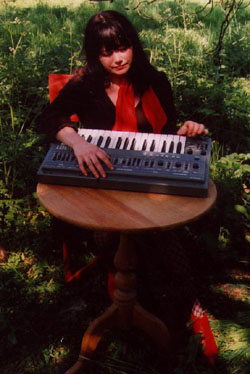 What happened in the meantime? What have you being doing before starting this new project?

After Add N to (X) split up I didn’t have any equipment so I couldn’t make music. I had to get my synths back from Idaho where I had left some with friend, and I had to steal back some synths from the rehearsal room in the middle of the night, I had to get back my beautiful bastard electronic children. Then I started recording, we decided within days to find somewhere, packed up the synths and got down to it.

I am sure this isn’t a creative question, but I must ask you… to *which* number are you referring to?

All numbers large and small. Googolplex, binary, credit card numbers, phone numbers, car registration numbers, and how many lovers have you had? How many animals have died in the war in Iraq? How many people were killed in the holocaust? How many strings on a guitar? Sugars in you tea? How many records have you sold? How many times have you been to the toilet today? How old are you?

I think it is a polarisation of thoughts / ideas concentrated into a small space. All the things I wanted to do in Add N to X but were not allowed to because it was not ‘cool’. I was sick of acting the hard woman, the noise terrorist, the drunk, the drug addict. I seemed to be doing it for every one else’s entertainment, not mine.

What are your projects for the near times?

Well, what we are doing right now is releasing a compilation album ‘The Electronic Bible’, there is a single out 1st. On the album (July release) we’ve got Richard H Kirk (ex-Cabaret Voltaire), Relaxed Muscle (Jarvis cocker), Sean o Hagen (High Llamas), Kings Have Long Arms, Hiem, Transformer, DJ Roboter, Sonic Boom and loads of others. It’s fucking brilliant. Oh I forgot… the track from Sonic was recorded with Delia Derbyshire, just before she died. I am so honoured to have that track on the album, she was a genius.
I am going to get some recordings of pulsars sent to me from the CETI – Center for Extraterrestrial Investigation, in America, so I can put together some deep space music. And I am going to find a cider press to make large number cider and wine, I am embarking on Solar Terrorism (when you plant something as an act of terrorism, like a small herb outside 10 Downing Street) its something they did in the 1920’s in a political party called ‘the kibbo kiff’ Steve Claydon was telling me about it.

There are some rumours that, in the course of “Spray on Sound” production, you have faced an important ordeal where you proved to be successful in restoring the joy of life in a little town named “Dedworth”. Where is Dedworth really located? Where do you think the “Black Balls of Despair” really come from? Was it a hard battle?

Yes it really does exist; it’s about 30 miles southwest of London. No one goes there and no one knows about it, it’s like a time warp. Its not a place tourists go, this is why we like it, it’s not cute, and it’s quite the opposite. We write the newspaper and document the strange happenings. Like the ‘black balls of despair’. Black balls are the manifestation of depression. Like the Golem. A creature / thing that manifests and thrives on ill feeling. It’s like the worst hangover you have ever had that looks like a huge black ball covered in ginger hair and smelling of sulphur, and emits a high frequency sound. 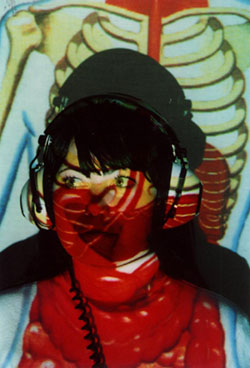 Violets are red and roses are blue… Like the cat talking to Alice In Wonderland, let me ask you now a dirty, little, nasty couple of questions. a) What things that come out in your mind when reading these words: art; heart; earth; red; rid; mind; water; “boing!”. b) Is there some structure or structures that you can retrieve from all or some of them? c) what’s your favourite food?

ART = always do the opposite.
HEART = listen to it carefully, it knows best.
RED = the inside of a nursed cape.
MIND = stagnant
WATER = goes well with vodka
BOING! = the black balls are calling me….
FAVOURITE FOOD = I eat sound.

I think Ann Shenton is a mammal. She might be a mollusc, a perceves, she lives under a stone in the cold waters of the English Channel and dreams beneath the black liquid of growing wings one day.