“Our catalogue focuses mostly on experimental, weird – or simply cool – music made with extensive use of electronic instruments.
(…)
The aim of Afe is to break down the barriers existing in electronic music and its efforts are addressed to all the fearless / open-minded listeners who will be able to get over the terrible shock of seeing such extremely different productions standing side by side.”
– from the Afe Records website 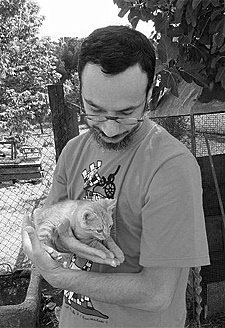 1 – How and why did you come about starting Afe Records?

There’s never been a moment where I thought “I’d like to start a label”, it all happened almost by chance. Sometimes in the early 90s I decided to make some tapes of my music available to friends of mine for free. At a certain point some of my friends started recording their own music and I used to help them with artworks, audio-mastering, etc. I duplicated tapes at home, gave them catalogue numbers and made graphic works. Suddenly people started asking to buy them: the label was born in such a natural way, I gave it a name and voilà!

2 – When you started Afe Records, were there any labels that you could say were a reference/inspiration for your efforts?

During those years I was very influenced by all the Industrial D.I.Y. underground. In particular, I was in close contact with Moreno Daldosso of Murder Release and Ivan Benja of Fluxus n° 2 / Kronotop, I think that their efforts inspired me somehow.

3 – Almost mandatory question, how did the name “Afe Records” come about?

Afe is an acronym for “Another Friendly Edition”. I choose this name to emphasize my attitude at making things happen in a friendly and relaxed way.

4 – Since the inception of Afe Records, are there any events in the history of the label that you’d consider as particularly relevant, from difficulties and setbacks to successes?

Yes, there is at least one particular event which made me happy the most. I am talking about the party I organized in November 2005 to celebrate the label’s tenth anniversary. Fifteen different acts – about thirty performers in total – went on stage during that night and the place was crowded with hundreds of people. It was a memorable event which has given great sense to my activity with the label and to all the time and strength I infused into Afe since the beginning.

5 – So far what would you consider as special highlights (or successful) releases and artists in the history of Afe Records?

I am very fond of each and every release I publish on Afe, but of course I have some favorites. Currently the two most successful Afe releases are “Retrovirus” by Bad Sector, which sold-out in just six months when it was released in late 2001, and “Zehn Tage (Touka)” by Telepherique and Maurizio Bianchi, which is still available in a small smount of copies at the time of writing.

Among my favorites ambient/experimental works released on Afe during the years I would also like to mention “Dog Fox Gone To Ground” by Aidan Baker, “Yr” by Dronaement and “The Significance of Secrecy” by True Colour Of Blood. Thinking about the releases of a more electronic/rhythmic nature I can’t help to mention at least “Caric Kils” by Frog Pocket, “Anthophobia” by The Impossible Flower, “Plochy” by mindMap, “Quatro-Erogenic-Occupy Theme’s Part II” by De Fabriek and “Living In a Pixel” by Leeza. Among the latest releases I would also pick up “Je déchire l’ongle aux criminels” by Mark Hamn, “Testa piena d’orche” by Logoplasm, “Chemical Nature” by a034 and “Vor Feuerschlünden” by Cría Cuervos.

6 – Are there any releases in particular that you would recommend as good ‘introductory material’ to the Afe Records label?

I’m sure that many of the releases I mentioned replying to the previous question would make most fearless listeners more than happy. By the way, if I have to choose at least one album to represent many of the different styles of electronic music released on Afe, then I would pick up “Plochy” by mindMap; it has ambient textures, it has songs, you can sort of “dance” to certain tracks and appreciate all the research that went into crafting the sounds on others. It’s a lovely album and a truly 360° journey into the realm of the electronic sound. With contributions by aal, Bad Sector, Bestia Centauri, Canaan, Etere-o, Moan, Non Ethos, Ornament, Subinterior, Subterranean Source, True Colour Of Blood and my own Amon project, I would also recommend the dark-ambient compilation “No Abiding Places” to anyone interested in this kind of music.

Regarding the label, I don’t think I have any regrets at all, maybe – and I say maybe – if I were in a position to go back and change something then I would try to create a more elaborate logo for the label, instead of using the simple type font I decided to use in the early days as an instinctive and simple choice.

8 – An obvious question, but what is Afe Records’s ‘relationship’ with the Internet? From promotion tool and digital sales to file sharing and piracy, how has it affected you?

I think that for a small and “underground” label like Afe, the Internet is the most powerful and useful promoting tool. The Afe website is an ever-growing entity which I like to keep updated in an almost obsessive way with news, reviews, live dates, biographies, mp3s. etc. I am not used to send newsletters or make promotion through public forums, etc. People know that they can always count on the Afe website for any information or updates related to the label’s activities and this is something I’m particularly proud of. About piracy: last year I was quite surprised to learn that some of the Afe releases were illegally sold as digital downloads in Russia, I really can’t see the point in pirating small editions like those I’m involved to produce, I find it simply ridiculous.

On the other side, I don’t mind if people share the Afe releases – or my own music – on peer-to-peer networks: it’s a common practice nowadays and this kind of technology is easily available to anyone, so what else? I myself have a collection of about 10.000 original CDs and vinyls, but I’m not “innocent”, so to speak… Anyway, I believe that every single person seriously interested in music should try to keep a good balance and understand that they just can’t download everything without harming small and passionate labels like Afe and many others.

There are more than 350 full tracks available for free download in mp3 format on the Afe website, they should be enough to keep everybody happy: they represent exhaustive previews from every single release published by the label and I truly hope they can instill enough curiosity and pleasure to make listeners go for the originals.

I noticed that many people running “regular” labels have arguments against net-labels. I made some music available as net-releases on Afe in the past, and as a musician I also had some of my own music released by net-labels, so… I think that net-labels are a natural evolution of CD-R labels, just like these are an evolution of tape labels.

Personally I am still very intrigued by physical medias like vinyls and CDs and I find it very difficult to listen to a piece of music without its artwork/package counterpart. I don’t like to listen to music using my computer and if I want to enjoy something which was originally conceived as an mp3 release I usually convert it in WAV format and burn it as an audio CD-R… Once upon a time everybody could dub their own tapes at home and start a label: this kind of productions were considered sort of “B-productions”, then we all had the chance to burn music on CD-Rs and these became the new “B-productions”. In the end came the MP3s and they upset most of the people who were spending their money to release music…

I truly believe that what makes a real difference is not the media on which music is spread. The difference is in the care that individuals take when they release the music, the accuracy of selections, the audio-mastering, etc. I don’t think that my generation will see physical media disappear, it will take some more time before it could happen, at least in my opinion.

10 – Perspectives for the future, what lies in the horizon for Afe Records? Can you share some long-term goals and where would you like to see the label heading to?

During the last years the numbers of releases published by Afe has always increased: there were six releases in 2004, eight in 2005, seventeen in 2006 and twenty-four in 2007… I think I’ve reached my limit, so I guess that this trend is going to stop in the forthcoming year. The next releases are scheduled for October 2008, I recently started to work on them. Anyway, a few “appetizers” are probably going to be released in April, including a new John Hudak unreleased work. Forthcoming releases also include an Amon vs. Mortar full-lenght disc; the newest chapter of the collaboration between italian maestro Maurizio Bianchi and israeli veteran producer and multi-instrumentalist musician Maor Appelbaum; the return of Brian Lavelle with a new unreleased work; a noisy collaboration between italian underground guitarist / songwriter Daniele Brusaschetto and norwegian experimentalists Origami Galaktika and more surprises that will be unveiled as time goes by. I can’t imagine myself without Afe, so I truly hope I will always be able to keep it sailing across the ocean of music I enjoy the most.

During the last years I’ve been enthusiastically listening to anything coming from Benbecula Records in Scotland, most of their releases are top-quality and I find each of them quite interesting to say the least. I can’t help to mention Eibon Records from Italy, they always had a particular care for nice packages and strong music; they also released most of my dark-ambient CD releases and I think I was very lucky to meet them along the road. Talking about artists, I would strongly recommend Logoplasm, The Impossible Flower, Mark Hamn, Madame P: they make different kinds of music and all of them have their own very personal talent; they are going to explode sooner or later.

Yes, I would like to thank you for sending your questions, I’m glad to be featured on Connexion Bizarre. I’d like to invite all the people who enjoy experimental electronic music to visit the Afe website, the will surely discover quite interesting artists and music.