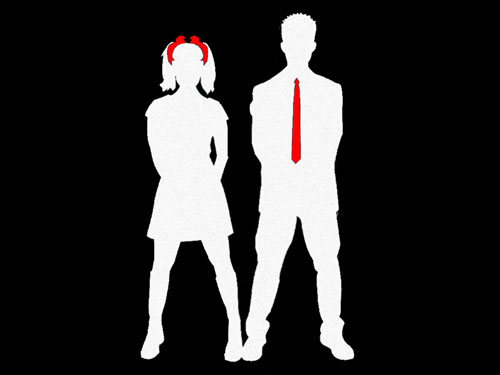 Epsilon Minus is the result of the collaboration between Bogart Shwadchuck (music and programming) and Jennifer Parkin (lyrics and vocals).
Having been classified as one of the best acts in the “Future Pop” genre, the Canadian duo present us with a non-pretentious and lively hybrid of techno, EBM and synthpop beats and melodies combined with female vocals. Most definitely, perky dance music.
Although relative newcomers to the electronic music scene, Epsilon Minus experienced a meteoric rise of sorts after the release of their debut CD in 2002, the self-titled “Epsilon Minus”, on the European label Alfa Matrix.
The first printing of “Epsilon Minus” has recently been reported as having sold out and on its way to a second printing. A second full-length album is already in the works.

C.B. – What can you tell us about the history of Epsilon Minus? How did it come to be?

Epsilon Minus in it’s current form started in Early 2000. Bogart had been doing solo music for some time before that and needed a vocalist. He gave me a song to try and see what I could do with it and I developed the vocals for what was then, the earliest version of “Wasted Years”. That was our first song together.

C.B. – Were you involved in other musical projects before Epsilon Minus?

I was not in anything serious before Epsilon Minus. I was writing songs and fooling around with music on my own. I used to sing and play guitar for friends at parties when I was in high school but my style never stayed in that genre. Bogart, as far as I know, has basically been nurturing Epsilon Minus to get it to what it is today through various incarnations.
Currently, Bogart has a sort of ambient side project called Nizt and he does a lot of remixing for other bands as Epsilon Minus. He’s remixed bands such as Regenerator, Stromkern, Z Prochek and more. I have done guest vocal work for the Belgium band Implant. Their CD is coming out in December and I have vox on almost all of the songs in a trance style, unlike Epsilon Minus. 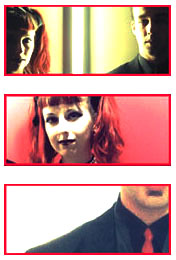 C.B. – The mandatory question: why the name Epsilon Minus?

C.B. – Do you have any form of musical training?

I do not have any except school choir. I don’t think Bogart has much either.

C.B. – It’s pretty much an established fact that it isn’t possible to live of one ‘s music in this genre and I suppose you have ‘real jobs’. How do you manage to coordinate work and music?

It’s very hard. We both work full time jobs. We also live in separate cities that are one hour apart and neither of us have cars. Luckily, the way we work allows us to do almost everything separately. We each work on our parts and then combine when we can to record.

C.B. – In addition to ‘real life’ and music, are you also involved in any other ‘scene-related’ activities like, for example, event organizing, Djaying?

I’ve DJayed once in Toronto but I’m not really a DJ. I go by DJ Kittenflug (stolen from the band Feindflug and made cute with kittens!) I have no idea if it makes any sense but I thought it was hilarious at the time. I also help my boyfriend’s music distribution company (stormingthebase.com) by doing vending tables at special events around town. We sold music at Synthpop Goes The World in Toronto and other Toronto events.

There really isn’t too much coordination. The process is this: Bogart makes a blank song, all music finished. He gives it to me and I structure lyrics and vocals out of it. Then we get together to record the vocals. We don’t limit each other, we just let each other go and trust what the other person is doing or going to do.

C.B. – What would you say were the main influences (past and present) in shaping Epsilon Minus’ sound and lyrics? Music, Cinema, Literature…?

This question could have such a long answer but I’ll keep it brief. I’m influenced by pop structure in my vocals but not in my lyrics. I think I have more to say in my music than the average pop song attempts. I have liked mostly female fronted bands ever since I was very young. I guess they have always been role models for me as I’ve always wanted to be a singer. I like fantastical movies like “Legend”, “Lord of the Rings” but I don’t know how much they have shaped me as a vocalist. I’m interested in science fiction writing as well as philosophy. 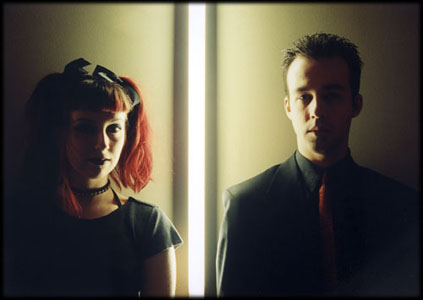 C.B. – There’s a lot of talk nowadays about ‘Future Pop’ and other names to label music under. What do you think of this ‘labelisation’? Do you see yourselves as being defined by any of these labels?

I really don’t care what we are labelled under. Labels sell records I guess. We make the music we want to make and we don’t think about “Is this a future pop song?”. I really don’t even know what that is anymore honestly. I guess it’s bands like VNV Nation but then I guess it’s really just bands in the industrial genre that sound techno? I don’t think this is what we are but if it means being lumped with the biggest bands today, then I guess that’s great!

C.B. – After a debut album featuring a strange mixture of fast-paced Euro-Techno, EBM, and Synthpop with clearly sung vocals, you dropped several hints that the next album might evolve towards a more melodic sound while showing some rap influences as well.

I’m definitely singing more melodic. It’s the only way to evolve from our last album (from a vocal stand point). You will hear it in our new single coming out in early 2003 on Alfa-Matrix’s “Square Matrix 003” called “80’s Boy”. It’s a real fun departure from the style we are used to but like our style, it is not really defining of the next album which will be a real variety. 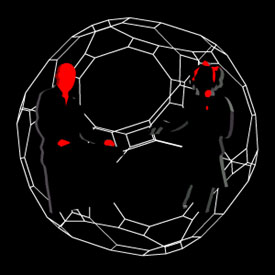 C.B. – Not wanting to get too many details (but feel free to give them away…), how will this influence be more apparent? In music structure, vocals? What can we really expect?

I think I answered that one! I think our newer songs are a lot smoother with more subtle music and sounds. Our first song off the new album can be heard on an all female compilation coming out (I think this week) called “Venussa XX Vol. 2” (from Alfa Matrix). The song is called “Ocean Floor”. That is all I will say!

C.B. – I believe you remixed some music for Stromkern. Did this band have any influence on your future rap direction?

Heh. That is funny because I like to “rap” in my girlie little style. I think hip-hop beats are amazing (the beats! Not hip-hop itself unfortunately) and I’d love to write a song in that style. I did, what I guess you would call rap on songs like “Anti-Gravity” and “Protection” on the first album. There is an upcoming song I’m working on with some “rap”. I’m really excited about it, it’s an aggressive song with live drums.

C.B. – Apart from the obvious advantages of being signed by a label, do you feel that it opened doors for further creative endeavours?

Yes it has. I’ve been getting lots of requests to do guest vocal work for other bands that have said they like my voice. It’s a great feeling. Bogart has been able to meet a lot of bands and exchange remixes which is good to experiment with other creative outlets.

C.B. – In view of your European success, has the possibility of an European EM tour already been considered?

I really want to go to Europe. I’ve never been there. I don’t think Bogart will be ready for one this year (2003). So we are probably just going to set up some North American dates in the coming summer which will be great to get out of our home town. There is a great chance that I will be coming to Europe to “tour” with Implant for festivals this summer so one half of EM will most likely be coming! 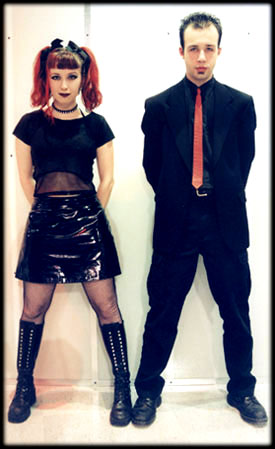 C.B. – In comparison with results in Europe, how are Epsilon Minus faring in their home territory?

Wonderfully! We have really good turn outs at our shows thus far and have sold a bunch of CD’s in Canada and the US. That is the only thing I can gauge success by at this point. When we start playing shows in other cities, we will be able to tell for sure (not just by our friends coming out to shows!). We get e-mails occasionally from people saying they like our stuff. That is the best feeling.

C.B. – Nowadays, what would you say is the condition of the Canadian scenes in terms of creative output on a local level? Are there any other Canadian bands/projects that you’d recommend as being worthy of notice?

Bands: Vegasphere, Headscan, Birthday Massacre, Delica, Weave. These are the ones I can think of off the top of my head. They are all different from ourselves in terms of style but they all represent a piece of local talent.

C.B. – How do you feel the different scenes (gothic, industrial, synthpop,.) might evolve as a consequence of the exposure that the ‘Future Pop’ trend will bring? And possibilities of mercantilist exploitation?

Hmmm… I have no idea. I think that synthpop is getting (has been) really big so it will just continue on the way it is. I think there is only so much you can do with techno before people get bored and it evolves. I’d really like to see the grittier music make a come back with the strong base synths like Nitzer Ebb. I don’t know if we will move in that direction. I would hope music like “Future Pop” could cross over into the mainstream at some point in time. I think a lot of it really deserves the exposure.

C.B. – Drifting a bit to Internet-related stuff namely the RIAA and its campaigns against music distribution over the ‘net. From the now classic attacks on P2P applications to the more recent attack on podcasts. What are your opinions on P2P applications, their use and impact in the music industries (especially independent artists and record labels)?

I don’t really know what P2P is. It’s hard to keep up with this stuff. I used to care more about downloading music. Now, most of the stories I hear from people is that they download songs to see if they like the bands then they buy the CD’s. Honestly, if someone downloads our stuff and likes it, I would hope they buy the CD but if they don’t, oh well! We’ve still gained more exposure through them hearing it. Bands honestly make the majority of their money playing live shows. The amount made off CD’s is very small when you are on a label because of the label’s overhead costs. I think the people that don’t buy the CD’s because they can download them, are the type that wouldn’t buy CD’s anyways.

C.B. – Almost ending… would you care to give a more esoteric and hermetic definition of ’00ntz!’ to further the confusion among audiences in general? ;-)

It’s all about the beats! Say 00ntz ten times fast and you will feel it! It’s almost like a bit of a joke now. It represents big club beats “the 00ntz”, it’s become our slogan. We even put it on our t-shirts that I’ve been selling just recently. Our music really isn’t just about this though that’s why it’s funny!

C.B. – In closing, we’d like to thank you for your time. Do you have any final words or requests? ;-)