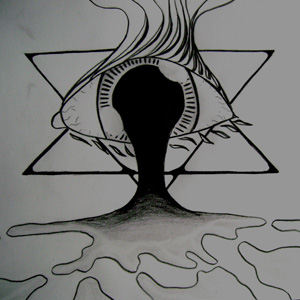 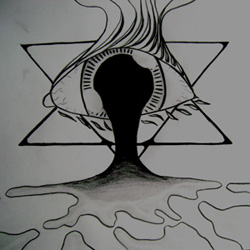 “Your head’s like mine, like all our heads; big enough to contain every god and devil there ever was. Big enough to hold the weight of oceans and the turning stars. Whole universes fit in there! But what do we choose to keep in this miraculous cabinet? Little broken things, sad trinkets that we play with over and over. The world turns our key and we play the same little tune again and again and we think that tune’s all we are.” (Grant Morrison)

Music is a tool of transformation, a way to communicate ideas and feeling without words and a way to get out of your mind, If you’ve ever danced yourself into a trance or been unable to resist moving to a beat you should have an idea of what I mean. Music is a magickal* art form for transcendence and I mean this in the least hippy way possible. I believe as artists this should be the goal of our work, not to make money or achieve fame but to put forward an idea to the listener and to impart it in such a way as that it is intrinsically understood and essentially enacts a change in the listeners consciousness.

“I prefer the analogy of the self as an organic city-entity, where some portions are more prominent than others, where there are hidden tunnels and sewers, and where the under levels carry vital energies to buildings. The city-self is continually changing and growing – tear down a building of belief, and another grows back in its place.” (Phil Hine, “Chaos Servitors – a user guide”)

If at this point you are wondering what the hell I’m talking about, dismissing it as new age bullshit and you’re uncomfortable with the whole idea of magick I would invite you to think of it within the psychological model before dismissing it outright. At a simple reductional level magick is rooted in the idea that reality has more to it than that which is presented in the everyday “The Map is not the Territory”. It is clear that the mind works on both a conscious and subconscious level and the easiest way to think of magick is as a tool to influence the subconscious areas of the mind and implant ideas within it. Often if we want something so hard that it takes over our life we do not get it because we end up overthinking our decisions, obsessing and trying to force reality into the pattern that we want, however if we simply implant the idea in our brains, put it in the back of our minds and ‘go with the flow’ more often than not what we want does manifest ‘as if by magick’. So think of magick as effective and practical psychology techniques if it helps you to start exploring it. I’m not asking you to believe what I say outright, try some of the techniques (which I will discuss in later articles) for yourself and see if you get results, if you invest belief in it you will!

Throughout history music has been used as a way to get ‘out of your head’ and the use of myth, ritual and magic is inherently intertwined with tribal cultures. Shamans enact multi-sensory explorations to learn from nature, heal people and maintain tangible links with the land they inhabit. However in western culture magick and ritual practices have faded due to the rapid expansion of technology and empirical models of thinking derived from a culture rooted in science. As such attempts to bring ritual and magical practices into art and culture is regarded with some skepticism by the intellectual community and often ignored due to its highly personal and subjective qualities. I believe that as artists we need to create a second renaissance where music and all other forms of art are seen as tools to work towards personal freedom and liberation, as practical ways of achieving brain change and mind expansion. I am not calling for a rejection of psychology or the scientific model, in fact these are integral to the practice of practical magick, but rather to open ourselves to the unexplained, the natural flows of energy, the subconscious, and to integrate these into our personality and our works. In western artistic practice the intellectualization of ritual practices and the influence of psychology means that magickal thinking is more often applied to practice before the fact, with rituals being done to give the artist inspiration or to implant ideas into their heads which will be subconsciously carried into the work that they create. Although this approach is valid I feel that it does not take the idea far enough, our work should become a ‘hyper-sigil’ which although influenced and informed by magick also attempts to BE magick. To open ourselves to this idea takes a great deal of work and practical experience and also to some extent a disregard for overarching ideas and models of modern society.

Rather than being a culture with a respect and connection with nature we are increasingly a culture with a great mental divide between the resources we consume and their source, magickal thinking represents a desire to connect more fully with nature, the nature of reality, the world around us and cause and effect. As we are all a product of modern culture a “paradigm-shift” is necessary to open ourselves to the magickal experience, and there is a period where the practitioner has to discard a number of their culturally held beliefs and accept that they are undergoing a change which is alien from their everyday patterns of thought. This dramatic and sometimes mentally and ideologically challenging perception shift has to occur to fully engage with these ideas and the initiate often undergoes periods of sickness and mental breakdown whilst learning their craft, the so called ‘shamanic initiation’, but this is just our minds adapting to a new way of thinking and essentially provides proof that what we are exploring has a physical and mental manifestation in the world that we must be respectful of, I.e it is concrete proof that all of this ACTUALLY WORKS.

There are a huge number of different ideas we can use to manifest these ideas in creative work, indeed there is pretty much something for everyone no matter what you chose to believe and in my next column I will suggest some practical applications of these ideas that the artist can use, such as sigils, and software to implement these in unusual ways, but for now I’ll leave you with some suggested listening and reading. Obviously this is not an exhaustive list and indeed for the sake of brevity hardly scratches the surface but they are at least good jumping off points to get into these ideas before we discuss their practical uses for the artist. Enjoy!