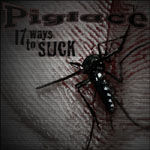 Pigface began in the early 90’s as something of a industrial supergroup and featured Martin Atkins and Bill Rieflin who had both been drummers with Ministry, and then there was Trent Reznor on vocals. Anyway this release features the first recording of “Suck” – which was originally recorded by Pigface, and then re-recorded by Nine Inch Nails for their “Broken” album. I find it a little strange that Pigface have released this now, I’m assuming it’s something for the Pigface completists out there, but saying that, it makes it sound like a bad idea releasing it, but it’s far from it.
“17 Ways To Suck” is basically a remix album featuring 17 different takes on one song. For those only familiar with the Nine Inch Nails version, this comes as a refreshing change. Particularly the Ahab remix – this is a bit of an indie rock flavour complete with brass section, and crooning, soulful, female vocals and a big backing chorus with clapping… But it works, and the singer sounds occasionally like Nikkie from Lords of Acid (or maybe I’m just thinking that as I listened to them a lot around the same time as discovering the likes of NIN and Ministry). Other mixes of note include the “sweeter than the sun radio edit”, which is very electro and actually takes away the dirtiness of the original somehow, and makes it quite sweet and perky. However, the “Acoustic version” brings the filth right back in there with added Sitar! It’s a little strange getting used to it, but that’s the point of a good remix album, to give different perspectives.
The only bad thing about the album is the timing of its release. I can’t quite get my head around that, and it can get a little wearing listening to the same song, regardless of the strengths of the remixes, but saying that I could gladly listen to the Ahab remix over and over again. If you like remix albums, Pigface, or indeed, NIN, you’ll get something out of this. An interesting release, to say the least.