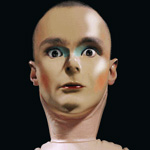 After the debut album “Explosive Piece of Mind” and preceeded by the whimsical single “Library”, “Cursor Miner Plays God” marks the return of talented British musician Robert Tubb, a.k.a. Cursor Miner, for another full dose of incisive and amusing socially conscious lo-fi digipop.
Compared to the previous album, this sophomore effort shows a clear evolution in Cursor Miner’s song-writing. Especially in terms of musical composition, Cursor Miner seems more coherent in this second album as well as somewhat more enthusiastic. Despite the presence of a couple of instrumental pieces, there seems to be a clear focus on song structures and in transmitting the artist’s personal opinions and views. A minor fault in this album, however, is that there seems to be something amiss towards in the final songs, maybe a couple of musical pieces to bring them together…
Musically, Cursor Miner’s straightforward characteristic raw sound can’t be easily pegged in any particular style, at best one can refer to is as lo-fi Digi-Pop. His music is based in heavy use of manic robotic beatbox rhythms (and one is left wondering if the beatbox might be broken) coupled with melodic and guitar work, the occasional (but useful) samples and Beck Hansen’s voice filtered through a vocoder. Most of Cursor Miner’s raw tunes have some dance appeal and are instantly catchy, much in the manner of a publicity jingle or a nursery rhyme, and become even more so when in song mode.
Lyrically, Rob Tubb’s lyrics are surreal, have a certain brittish tint to them and an apparent cartoony naiveté. Apparent because it would seem that mr. Tubb has understood that sometimes the best way to say things is to say them simply and directly. Many of his lyrics are actually quite scathing, politically incorrect (thank goodness for that!) and socially/reality conscious, with songs like “Library”, “Gizmo Kid” and “War Machine” being prime examples of this. In a slightly different vein, songs like “Me And My Clone”, “Man Made Man” play with futuristic science-gone-mad scenarios and “Hi Tech Weaponry Girl” is not unlike a cyberpunk nightmare out of Warren Ellis’ mind. “LSD”? I’ll have one, thank you…
“Cursor Miner Plays God” is a very amusing, seriously satirical and, at times, somewhat puzzling album from a very promising artist. It might be a bit of an acquired taste but is nevertheless worth checking out.