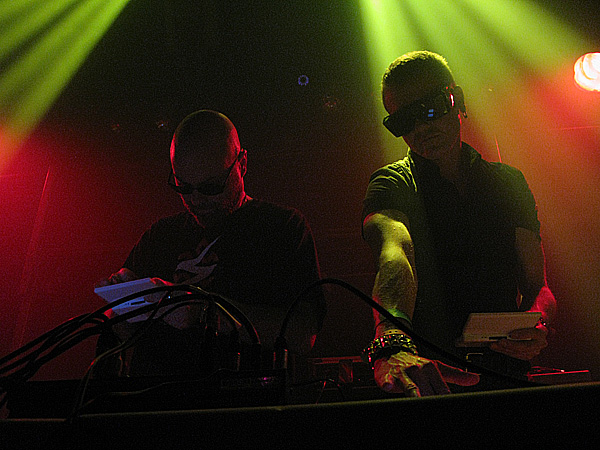 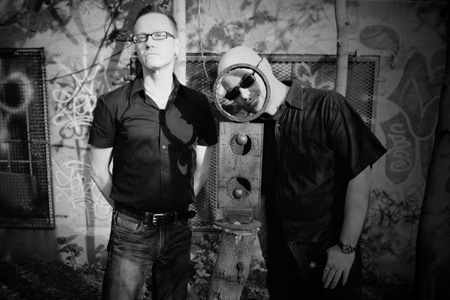 “Formed in Spring of 2008 at a Wolf Eyes concert in Montreal, The Montreal Nintendo Orkestar are a new force of un-nature on the Montreal music scene. Comprised of French sound experimentalist Albérick (.cut, Thee Virginal Brides) and enigmatic local artist Stephen S.Cibo (Black Leader), the duo have exceeded the preconceptions and limitations of their remarkably minimalist set-up.”
– from the Montreal Nintendo Orkestar official MySpace

First things first, how are you both doing?

As usual, Stephen is busy and I am angry. Actually, we have just finished our practice for our first show in two months and we really look forward to that.

How did the both of you meet and come to form this project?

We are both huge music obsessives. The first time we actually met was at a Nina Hagen concert in 2003.
The idea of Montreal Nintendo Orkestar also started at a concert, almost as a joke. I got to the venue first and was playing with my DS waiting for the first acts to start. Stephen showed up and joined me at my table and that was it… We discussed video game units and effect pedals and we had our first practice the next day.

Classic question, what influences do you both share that comes together in this project?

Our tastes are pretty varied, but we both have a strong interest in experimental music, although Stephen has an obsession for sharks and me for Stanley Kubrick.

There is a vast choice of equipment and programs for music; can you explain why you chose this form of media?

Why not? As I said before, it started almost as a joke. When we scheduled our first practice we had no real expectations. We just started to experiment with the DS and we pressed “Record”; everything else came on its own.

With time, we have changed our way of working in the studio. All our first tracks were recorded live, now we use multi-tracking which allows us to add even more details to every song.

Using a Nintendo system to make music is interesting, can you explain how you managed to pull this off?

It’s fun: we are playing shows while playing video games. From my experience of playing in other bands with more conventional equipment, I have to say it is quite enjoyable to be able to fit all your gear into a single backpack when you go to play a show. 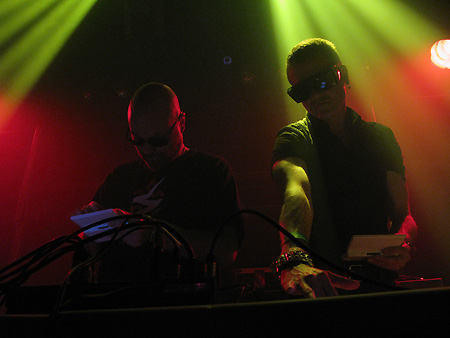 Having worked at several events, like the recent Pop Montreal and a performance at Musée d’Art Contemporain de Montréal, which event do you think worked best to your advantage?

Both were really different experiences. We have actually played two shows at Pop Montreal last year.

For the first one we were asked to play a live soundtrack to a silent movie; we chose the Benjam Christensen 1922 film “Häxan”. It was a composed soundtrack as opposed to our usual improvised live shows. We had spent several months working on that one and we were very happy with the final result. We never thought playing 1 hour and 40 minutes would go so fast. And we would really like to be able to play that soundtrack again in the future.

The second one was opening for Atari Teenage Riot at Foufounes Electriques. It was a whole different experience. For that one we played a few songs from our new release (a split with K.A.N.T.N.A.G.A.N.O and Cheerleader69), and we were harsh and loud. Alec Empire and his manager were extremely kind to us. It was also the first time we could play with a proper sound system that would support the full range of our tonalities.

As far as I am concerned, I have a huge passion for contemporary art museums. I have always enjoyed seeing shows there and these places are always full of surprises, like the day I got face to face with the giant penis sculpture from “Clockwork Orange” at Le Palais De Tokyo. However, Cibo tends to distance himself from such bourgeois practices.

Speaking of live shows, what is your live show set up?

We use Nintendo DS units as sound generators and a bunch of analog pedals to manipulate the sound live. Except for the two shows we just talked about at this year’s Pop Montreal, every other concert we played was improvised. If you have been to two of our shows on the same week, the final experience can be totally different.

Sometimes we have our friend Etienne Blythe (Cloudscapes), who lends us some of his handmade pedals, and we just start to experiment with unknown effects.

Having worked with several artists, for instance Japanese musician Hitomi Yamamoto, what have you learned as musicians from these experiences?

Although, the Montreal Nintendo Orkestar is a duo, we have always enjoyed playing with other people. Our release with Hitomi Yamamoto was only a split EP. We have not really have had any interactions with her.

For our second EP, “Dinosaur Sex”, we have collaborated with Kenji Siratori and Bryin Dall. We met Bryin in New York and he is an amazing guy. As far as live shows are concerned, we have played a few shows with Etienne Blythe from Cloudscapes. We have also played one show with Docteur Pier-Emmanuel Tremblay last year, and this is what gave us the idea to integrate some of his bells, gongs, nuts and chimes in both our “Häxan” soundtrack and the “3X3″ split.

We are now working on a remix EP. We have received very interesting material by Fragment, Operation of the Sun, from France, and Pigswill, from the USA, and we expect more to come. Another remix by Pigswill has been released on our split 3” with Raymonde Howard and Chatours.

Last but not least, we are collaborating with video artists and filmmakers to illustrate our “Dinosaur Sex” EP.

With one of your members also running the [walnut + locust] label, are there any projects/albums on said label you could recommend?

I am proud of all the releases we have put out on [walnut + locust]. Amongst my own personal favorites are the “CrO2” compilations featuring many fantastic artists I would have never dreamed of working with, such as Aube, Chris Carter, Molasses… The Maggot Breeder’s “Myiasis” is also a great album, and I am also very happy with the last volume of the “3X3” series with K.A.N.T.N.A.G.A.N.O, Cheerleader69 and… Montreal Nintendo Orkestar! All the covers were hand-screened at Korpo and we assembled all the CDs by hand.

[walnut + locust] has also curated a compilation for our friends of the Israeli label 0BPM. This compilation is called “Canadian Drones Volume One”, although there are no plans for any volume two. Most of our favorite Canadian artists and friends are there, such as thisquietarmy, both Aidan Baker and Leah Buckareff from Nadja, Les Beyond, Alexandre St-Onge, Rei Rea, Cloudscapes… to name a few.

Final last words for the readers?

Maybe a few links to find more information about all the wonderful people we have talked about would be helpful?
www.dronecloud.org
www.myspace.com/spiralscape
www.myspace.com/fsbpm
cultureisnotyourfriend.bandcamp.com

We have just contributed to an international charity compilation called “Noises For Japan”; it has been released in early April by the webzine Culture Is Not Your Friend! And all donations go directly to jears.org.

Also, we would like to take this opportunity to thank everyone who has supported us since the beginning, and especially Management, Le Docteur and Mister Pervert (you know who you are…). For the readers and the audience in general, stay creative and supportive, keep playing with yourselves. Support your local shows and independent record stores. And don’t forget, the Montreal Nintendo Orkestar loves you!

— interview by Kathleen Chausse (May 2011), photos by David Smegelski and Meryem Yildiz