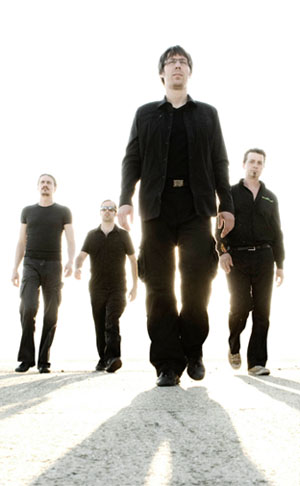 In February, mind.in.a.box will be releasing their new album, “R.E.T.R.O.” This latest edition to the mind.in.a.box discography may sound futuristic to many fans, but make no mistake, the inspiration for this work was built upon a deep passion for some of the tracks that played on the classic Commodore 64. Blending vintage video game tunes with their electrifying musical vision, Stefan (Stev) Poiss and Markus Hadwiger have brought a whole new sound to the music of mind.in.a.box. While “R.E.T.R.O.” does not mark a permanent change in the style of their music, Poiss and Hadwiger were both proud to pay tribute to the past in this truly synergistic release.

Stev:About two years ago, I was once again listening intensively to old home computer music, which is often called chip music nowadays. I had known these tunes a long time ago, and I realized how much they still touch me today. There were tracks like “Last Ninja 3”, which emanates such an incredible power that I somehow felt compelled to try and do my own contemporary version of this piece. I think in general many people do not think so much of old computer music, because to them it does not sound like ‘real music’. But oftentimes the essence of these old tracks is much stronger than commercial ‘real music’ of today. I wanted to help show that these old tracks are so much more than what the originals of the eighties might sound like today because of technical restrictions. I did not want to do way-out remixes that in the end do not have much in common with the original, which I think is what many people try to do. I wanted to try to re-imagine these old tracks as I think they could have been done back then, if today’s production standards would have existed then. This was the starting point for “R.E.T.R.O.” At that time I did not know that these tracks would become an entire album, but the “Last Ninja 3” cover, the first of these re-imagined tracks that I did, was how it all began.

Markus:Later, when Stev had already done several of these tracks, we felt that we really would like to release them as a real album to do them justice. The initial plan was to do that as a stand-alone project and not as mind.in.a.box, but in the end we decided to release this material as a kind of ‘special’ mind.in.a.box album after all. So we were very happy that Stefan Herwig, the dependent records boss, also liked the material a lot and likewise thought that it would be a good idea to release it as a full mind.in.a.box album.”

Stev:Markus and I then also did several vocal tracks to complement the purely instrumental cover tracks. We had a lot of fun doing those, since I think they are a kind of tongue-in-cheek reflections on retro music. “R.E.T.R.O.” now is about half instrumental tracks, and half with vocals. We are very happy with the result and are anxious to see how people will like this special album.”

When did you first develop the concept for this album?

Stev: This album more just happened, but we nevertheless view it as an equal to our other albums, even though there is no direct connection. When I finished the first two Commodore 64 covers, I thought it would be really nice to do an entire album. After “8 bits”, which is essentially an homage to the game “Giana Sisters”, which was a shameless clone of “Super Mario Brothers”, but nevertheless ground-breaking on the Commodore 64, it became clear by itself that we had to do a really special album for all this material.

What made you choose to make this composition?

Stev:I chose the tracks that I remembered most fondly from the eighties and early nineties, and where I also saw a fitting way to kind of give them a cool new outfit for today. I think that many old tunes are hard to re-imagine with today’s possibilities, so although I really like the originals, I often did not see a good way for doing cool contemporary remixes. Oftentimes, the melodies of old chip tunes are extremely playful, which I think is hard to recreate properly in a larger electronic setting without risking to sound cheesy. But of course I wanted the re-imagined versions to be really cool, so in the end it was actually not that easy to pick the right tracks from the incredible amount of great tunes on the Commodore 64. But the basic idea for me was this emotional desire to wrap up the past by bringing into the future what I remembered best, to kind of say good bye and pay tribute at the same time. It was important for me to preserve my original feelings towards these tracks and not substitute them with completely different moods.

How should fans expect it to differ from other mind.in.a.box albums?

Markus:“R.E.T.R.O.” is a very special album and so it is probably not for every mind.in.a.box fan, which is a bit unfortunate but hard to avoid if you want to be a band that really likes to try new things, styles, and concepts. So we also hope that hardcore fans will bear with us, and also remember that what makes up mind.in.a.box is being open to new and different things. Our other albums have this special, dark feeling to them, which I think is not the case for R.E.T.R.O because it follows different intentions. Still, there are several of the ‘usual’ mind.in.a.box elements, but overall the mood of this album is of course quite different from the previous three.”

Stev:It is an homage to the glorious days of the Commodore 64, where the music still came from a crappy TV speaker, and in mono, not stereo, and where the mood was more playful than dark or brooding. This is how I think the album should be viewed. It definitely requires an open mind, but that is what mind.in.a.box is about after all. With songs like “8 bits”, which maybe could be viewed as one of the most ‘commercial’ tracks we have done thus far, I hope that these tracks will also make listeners smile.

Markus: The lyrics on “R.E.T.R.O.” are also intended to be fun, playful, and nostalgic. There is no relation to the ongoing mind.in.a.box storyline. We even made a little video clip for “8 bits”, which shows the ugly truth about our live base player, Roman, and myself in pictures. I am looking forward to seeing how fans that do not have their own personal connection to the times of the Commodore 64 will like “R.E.T.R.O.” Even though these tracks are based on older technology, I could imagine that some people might view them as sounding more futuristic than some other songs that are typically considered ‘future pop’.

Do you believe that R.E.T.R.O will introduce a wider range of listeners to MIAB?

Stev:That would be nice, but largely it would surprise me. Although there are definitely a lot of people that like chip music, it is a large active community, who probably have not heard about us at all until now. I also think some songs definitely have a lot of ‘commercial’ potential, for lack of a better term. But, I think it will be hard to reach new audiences that do not already listen to either mind.in.a.box or otherwise like chip music from the eighties and early nineties. Above all, I am just very happy about this release, because it was a real desire for me to pay tribute to those times and some of the early pioneers.

What was markedly different about working on this new album, and how did it feel to compose it?

Stev:There were a lot of memories while working on this album. For the new songs, it was very similar to working on regular mind.in.a.box material, but for the Commodore 64 covers, the approach was naturally, completely different. On the one hand you try to faithfully reproduce the original melodies, but on the other one you have to choose which melodies to drop and what new ones to add in order to transfer the song into the present.

Markus:There are lots of technical issues to consider here. For example, there were only three simultaneous channels on the Commodore 64 sound chip after all, and it was all mono. There are a lot of Commodore 64 remix albums, but both Stev and I often have a hard time with a lot of the existing remixes because many of them try to do kind of non-electronic re-interpretations. We believe that the very essence of these old tracks is that they were completely electronic, both technically, but especially also with respect to the mood that they created in listeners. This peculiar electronic sound really made them what they are. So you could say we tried to play back the original tunes in a mind.in.a.box player, maybe like the one shown on the cover of “R.E.T.R.O.”

Does “R.E.T.R.O.” follow any sort of a narrative, such as previous compositions have?

Markus:There are a couple of songs on the album that we think are quite typical for the style of mind.in.a.box, so our fans will hopefully feel familiar there, even if they do not have any previous emotional connection to chip music. However, there is no narrative, so R.E.T.R.O is completely separate from our other albums that live in the mind.in.a.box storyline.

Stev:We will almost certainly integrate the last track from R.E.T.R.O into our live set. I think it fits in very well with our other songs. For this song, we are also currently working on a little video clip that we will make available in our special download section on the mind.in.a.box web-page, which is accessible with a code from the booklet of “R.E.T.R.O.”

Will future work follow more in the footsteps of the first three albums or is mind.in.a.box planning to diversify their range of sounds beginning with R.E.T.R.O?

Markus:Our fifth album will be a ‘typical’ mind.in.a.box album again, and of course it will continue the mind.in.a.box storyline, and Black will be back!

Stev:R.E.T.R.O will stay a very special album that is close to our hearts, for living a truly great style of music that is gone in most respects but nevertheless still an important part of our present.”