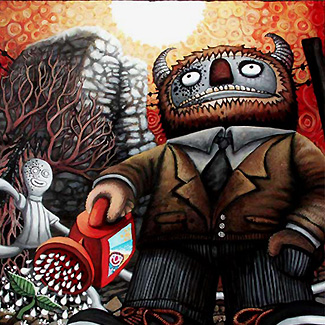 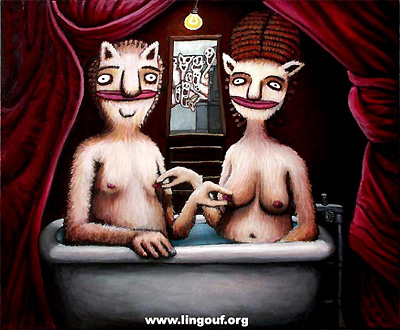 Born and living in Lower Normandy, Vincent Ingouf started walking down the artistic path from an very young age. Passionate about comics, he slowly turned his aspirations to painting and later to animation and music under the name ‘Lingouf’, and has released several albums to critical acclaim – most recently through the German cult experimental music label Ant-Zen.

How are you doing?

How long have you lived in Normandy? How do you occupy your free time?

I’ve lived in Normandy since my childhood. I work full-time in a library, I try to use my time remaining between composition, painting, working in my house, gardening, family and friends…

I love your website. Is the all the art your own original work (I noticed a Deviantart link on the site) and did you program the site as well?

Yes, I’ve made the majority of the images of the site. In general, I make sketches by hand then add color on the computer, then I program them as I can. It’s amusing to see the drawings animate thanks to a few code fragments.

Something I always like to ask people: Can you give me a quick list of favourite artists, musicians, writers and directors?

In painting: the surrealists come quickly to mind, along with new realists and lowbrow art 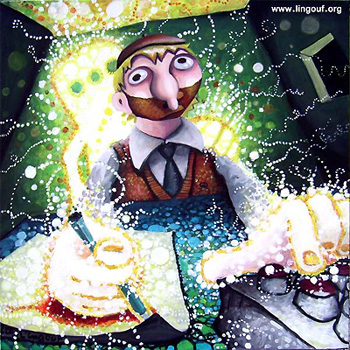 Your style seems to be an interesting mix of hard electronics, atmospherics, catchy synths and garbled bent samples. What would you claim as your inspiration or influences in your work? Also, what would you claim your music to sound like, out of curiosity?

In fact, my influences differ much according to what I’m listening to at the moment, my mood and the material I’m using. It often happens that, when beginning to compose a track, I feel inspired by a musical piece and then, during the composition process, I move on to something completey different. For example when beginning “Angel and Gruikk” I wanted to make an ambient album which would be kind like a lullaby in the style of “Susumu Yokota”… With the piece “Go Quantum” (in reference to the cartoons “Doctor Quantum”) I wanted to realize pieces like gabber in the style of DJ Promo, and I continuously listened to his album “Quality Control” while doing work at home. Finally, the track ended sounding gabber without being really gabber…

Would you consider your music a free flow of creativity or do you set out with something intentional in mind? For instance, leaning towards aggressive or calming elements?

It depends. In general I move on instinct and I’ll have a basic idea which I modify progressively. Other times I start from a story from history, a film, a quotation, a character, an idea that I would try to put into music.

I started playing around with sound on occasion a little more than ten years ago, making sound collages and do-it-yourself on K7 and the didgeridoo. Then I dedicated myself more seriously to composition in 2001.

Mainly the music that my brother showed me. We got interested in electronic music at one time when we listened to experimental rock’n’roll like Sonic Youth. One day he brought some Prodigy, which made a bridge between rock’n’roll and electronics, then gradually there were the cassettes coming from free-parties – that’s where we discovered the first tracks by Laurent Ho and Ingler…

Classic question, but it has to be asked, where did the name Lingouf come from?

That comes from my father, Ingouf is my family name. :) 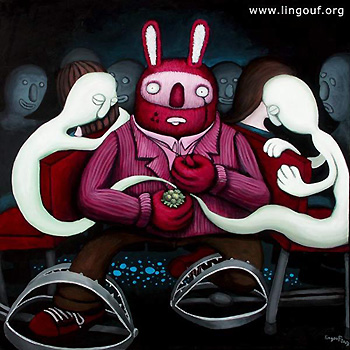 Also where do you come up with the album titles (“International Fratricide”, “Ecritomate”, “Area-Keloza” and “Ange et Gruikk”)? What are they in reference to?

“Internazional Fratricide”, “Ecritomate”, “Area Keloza” and “Ange et Gruikk” correspond to paintings on which I worked at the same time as on the albums. They each have their story…

Curious. I noticed a huge difference pace-wise on “Ange et Kruikk” from the prior releases. It seems less aggressive and more subdued. Is this just a momentary detour or a sign of your maturation as an artist, or something else?

If maturity comes with calm music, then i’m far from being ripe. In fact I have realized my more aggressive pieces following “Angel et Gruikk” – “Area Keloza”, for example, was composed afterwards. Since then I’ve composed approximately four other relatively energetic albums. Let’s say that “Ange et Gruikk” is an album of ‘love ballads’ (without words).

I like to work on soft pieces which can be easily listened to, like other times I like to make wilder music. Thus this is not really a temporary turning because there will be other things in the same vein.

Do you ever perform live? If so, of what does your live performance consist and what can the audience at your show expect? What weight do you put on a band touring versus being strictly studio based?

Yes, I play live, although less and less lately. Generally I play my already existing pieces, pattern by pattern, only modifying certain elements with effects while adding some noises and textures here and there. I try to have a configuration which isn’t too fixed, allowing me to play different things on different occasions, to improvise a minimum, and which are simultaneously sufficiently elaborate and prepared to play passages with a complex structure. It’s often the dilemma of the electronic musicians – to choose between the perfect live show where there is nothing more to make and a configuration based on improvisation which often will lead to simpler pieces. I quite admire groups such as Winterkälte which plays totally live, which allows even more room to improvise. On my side, what I do live is relatively simple from a technical point of view, it’s a little as if I played Barbian Organ – the largest part of work is to prepare the perforated pasteboards and when used ‘live’ it is enough to turn the crank.

What does your studio setup consist of? Do you prefer hardware or software for production? What is some gear/software you are looking to acquire or wish to include in your setup?

I love hardware and software. I started making electronic music with a small SP202 Boss sampler, then a zoom st224, then I passed to the computer with Fruity Loops and Cubase. Even not long ago, I composed and played my pieces with two Korg ESX.

Nowadays I work with a Spectralis from Radik Al Technology, a kind of hybrid groovebox/analog synth sampler – it is a rather complex machine with enormous possibilities – and I also use a Virus Snow. In addition to composition equipment, I have a recorder and a microphone for field sound recordings in nature. Recently I’ve also acquired the Sherman filterbank, an insane analog distortion tool. I’m also more and more interested in analog and modular synthetizers, but it is a very expensive passion so, for the moment, I concentrate on what I have already. 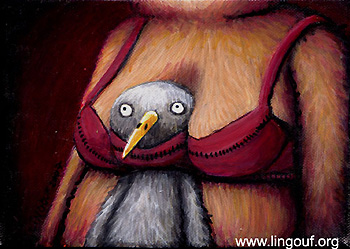 How did you come to be in contact with Ant-Zen, Ark-Aïk and Otolythe?

At the time I did not know much about Ant-Zen, it was Moha-Tyb and Anth-Ybio who made me discover this label and also dragged me for the first time to a Maschinenfest (in 2004).

I made contact with Ant-Zen afterwards, quite simply by sending the demos for “Ange et Gruikk” and “Area Keloza” to the address indicated on their site. I had sent “Area Keloza” to several other more hardcore-directed labels, and finally it was the only label that answered…

Ark-Aïk is a different case in that I knew Ybrid before she started the label, so it came along naturally. And Otolythe is a collective that I created with friends to be able to organize events which can mix exhibitions, music or dance workshops and varied concerts. Quite recently we organized a small festival in a theatre located in an old farm.

Many projects… For a year now I have worked on small video games with a programmer friend (www.caou.org). I also have to release my latest four or five albums, send a track for the Signifier compilation, find time to paint, walk my dog, shave and do some gardening…

I think that the main thing to make good music is to have fun, to love what you’re doing, to not follow trends and to make the music that makes us feel good, whatever that is…

Thank you so much for your time. Any final words? 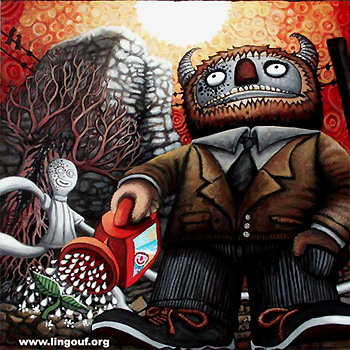