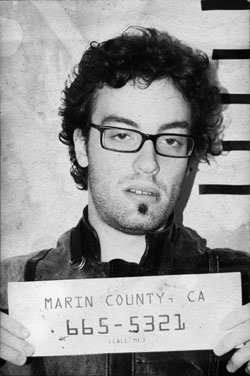 A nice chat with the vagrant/diva Liar’s Rosebush, totally or partly responsible for the authorship such acclaimed releases as “Circle The Squares”, “Nonsense” and “Collect:Erase”.

1 – The generic opener: can you give us a brief history of the Rosebush?

When I was twelve, my brother and I started making music on the family 486. Remixes of the theme from Doctor Who, that sort of thing. We got a bit older, my family got a new computer and I saved up enough pennies to buy a cheap sampler. We started making these self released CD R albums, and I think I produced something like seven albums in three years. What can I say… I was a nerdy teenager, and I guess it was an outlet for all that pent up sexual energy.

Eventually some local promoters heard the stuff and started booking me. After I spent a couple of years doing shows, Dave Dando Moore from Detritus heard my demo and offered to put out my first label release. From there I met people like Josh from scrape[dx] and Dave from Hive Records, and I found myself getting more shows in the US and more attention and reviews.

After a couple of releases on Hive, I decided to take some time to focus on composing for film and other projects. That’s where my energies have been going for the past couple of years. But I’ve been putting the finishing touches on a new album, and I think it’s definitely time to get back into Rosebush full force.

2 – Tell us more about these film compositions.

I’ve been in school working on a degree in Film Studies for the past five years, during which time I also co-ordinated the production wing of my university’s film society. I met some of my closest friends through the society, and we became a close-knit crew working on each other’s movies. I directed a few myself, but for the most part I worked in post-production audio doing foley and sound design, as well as doing a lot of scores.

Composing for film exercises different parts of my brain. You have to be able to step back from yourself a bit and make something that will contribute to someone else’s vision. That might mean making a heavy techno beat for a car chase, or it might mean playing guitar and harmonica for a love story. Being an album artist you can get away with being a bit self-centred, but scoring a film you have to recognize that it’s not about you.

3 – How did you come up with the name Liar’s Rosebush. Also, wasn’t there a ‘The’ in there at some point?

Ah, the classic question! The name Liar’s Rosebush came from an image in a short story my brother wrote years ago. It’s a plant that grows thorns and buds, and looks just like a rosebush, but never blossoms. I thought it sounded neat, so I took it. And yes, I’ve added a “The” sometimes, when I feel like being extra pretentious.

In college, a friend of mine started calling me “Rosebush” like it was my last name. So I’ve taken to using that as a short form. You know, like “Seinfeld” or “Obama”

4 – Well your last name is Rosen, right? So I mean the transition seems only natural. Also any plans for your own sitcom a la Seinfeld?

I think of that as a key demographic, so this is an important question. I usually tell old people that I make music with computers. If they pursue the issue further, I say that I make dance music then chop it up and make it sound strange. Like the Beach Boys did.

6 – Your music is a lot different than the majority of the rhythmic noise/idm/ambient out there; what inspires you to write music? How do you maintain such a fresh sound?

I guess having my start in noise still informs the way I come up with sounds, but the songs themselves go in a different direction. I don’t really relate to rhythmic noise anymore. There are still a few noise and idm acts I listen to, because they do really special things that can generate amazing ideas for sounds. I try to take those out there sounds and put them in a new context.

There are tons of other acts who take that approach. I’m blown away by the Ed Banger crew, particularly SebastiAn. His stuff is hard and downright ugly, but at the same time it’s so fun and energetic. Marrying those two can be really tough to do. Then there are people doing that and actually saying something with it, too. Like MIA or Saul Williams. They’re making these tough dance records that you can actually listen to over and over because they have so much to say.

But right now, I’m most likely to get inspired listening to old Stevie Wonder, Quincy Jones or David Bowie. It’s the music I grew up with, and I’ll always come back to it.

All I can do is make music that I would want to listen to or dance to myself. Sometimes that means coming up with a good groove, sometimes it means making a really dramatic song structure. My favourite artists are always ones that move through different spaces with their music, so that’s what I try to do.

7 – You’ve recently released a second split album with the Connecticut based rhythmic noise giant robot Scrap.edx, this one entitled “Nonsense”. Since you guys live in two different countries, how do you guys collaborate? How is this split different from your previous one “Collect:Erase”?

Josh and I have an almost extrasensory connection when it comes to music. Some might call it a bromance.

Living in different places can make collaborating a challenge, but it’s a lot of fun if you have a method. The album “Nonsense” was more of a collection of solo material, but for “Collect:Erase” we did a lot of collaborative work. We would individually produce a library of sounds and samples, email those to each other, and produce tracks using each other’s sounds. It was basically a process of back and forth remixing. Josh is a hyper talented producer with crazy attention to detail, and it’s amazing to work with him because our sounds are so different but somehow they work together really well.

In the past year, I’ve jammed live with some other laptop performers, and I’ve played in a couple of bands and a jazz quartet. What I’ve found is that collaborating is always different, depending on the people and personalities involved. It’s like having a conversation, working with another person to bring these abstract ideas to life… whether you’re in the same room or not, there’s always an energy to it that you just don’t get out of working alone.

8 – Why is your stuff on “Collect:Erase” so fucking good?

Well, we took a lot of steroids. That helped.

Seriously, though – don’t do drugs.

9 – Why is everyone in Canada a great producer? Like seriously, how is it possible that there is so much talent up there? Do you guys eat weird mind-enhancing vegetables that only grow in the distant north or something?

If such a vegetable exists, I haven’t found it.

There might be a lot of great producers up here, but remember, Canada is big. When you consider the land-mass, our per-capita number of great producers is probably pretty reasonable. And a lot of us haven’t quite figured out how to export ourselves, myself included.

10 – What do you have planned for the future? Any more collaborations/remixes, etc?

I’ve just signed with a new label called Meat Parade, based out of Montreal and Ottawa. A great bunch of guys, and I’m really excited to be on-board with them. I’ve got some new material to put out with them in the coming year, and I’ll be working on some remixes for the other acts on the label.

I’ve also just received a small government grant to put the finishing touches on a full-length. I’m planning to release that album myself, and it should be ready by January.

In the meantime, I have an ultra-limited single called “Start Snitchin'” coming out on Livevil Records out of Washington DC. The release is on a custom-made USB Flashdrive with a collectible package. I’m pretty excited about this one, it’s very slick. Look for it by the end of December.

So the next few months are going to be pretty busy! I’ll be playing as many shows as possible to support the releases – so if any show promoters are reading this, drop me a line! I want to play your town, and I am fun to have around!

— interview by Dan Barrett, originally published in Wounds Of The Earth (November 2008)