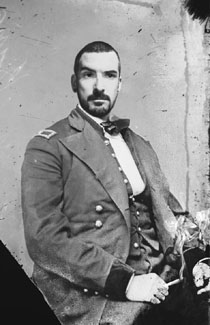 1 – To start this off right can you give us a brief bio of Displacer?

Hmm… I guess I started writing music around ’99. Got a gear habit for collecting synths and had to figure out what to do with it all, haha!
My music is a “hopeful” representation of what I like to listen to myself when I chill out and relax. I like to try and keep my music honest to me and explore new ideas and always push myself to make something better each time I write a song. I’m influenced all over the place, by people, art, politics, and I like to just have fun with it.

2 – The new album “The Witching Hour” has a definite 90’s trip-hop feel to it. What made you choose this route, which is pretty different from your previous material?

I always wanted to write a tighter concept album with the horror element, ever since I was a kid I was influenced by things that scare me. I remember the first record I got was the stories of Rip Van Winkle and on the other side was “The Legend of Sleepy Hollow” read by Boris Karloff… Damn, I couldn’t even get through one side of it without turning it off, haha!
On the other hand I love trip-hop, hip-hop, whatever, and it’s a natural flow for me. I love vintage synths and I think the beats groove the best with that vibe. Well for me anyway.

3 – I noticed you thanked authors like Washington Irving in the liner notes. If he could hear your album what would he think of it?

I would assume something along the lines of what happened in “Back to The Future” with Van Halen. But different.

4 – If vintagesynth.com was a physical store and there was a huge riot going on so that you had the chance to break into the store and steal one thing what would it be?

Hahaha! Could that be a tougher question? Most likely a Modular system… Emu or Moog for sure! Have you seen Jack Dangers’ studio?

5 – Wouldn’t a modular system be too heavy to carry away in the midst of a riot?

Hey man, you said anything! Heh, well you got me there, my super-human strength would kick in times of emergency. Or maybe I’d go for an old Minimoog! I could carry that a few blocks.

6 – I know you’re a fan of vintage synths, but are there any new/upcoming synths (or any other equipment) that you’re excited about?

There’s too much I’m excited about! I think at the top of my list right now is the Dave Smith Prophet ’08, it’s a new analog beast of a synth. Then there’s the new Linn drum sequencer coming out next year I want to get my hands on… I think it will replace my laptop for live gigs, so, yeah, I can’t wait for that.

7 – What inspired the material on “The Witching Hour”? Songs like “Warriors in God’s Army” might be a little more obvious, although perhaps not.

Like I said Boris Karloff was a huge influence. Vincent Price films, old Moog records, any old horror records really. I sampled Pirhana for “The Witching Hour”…
But “Warriors In God’s Army” is a different entity altogether. I was influenced by the documentary “Jesus Camp” for that one. I grew up in a community with this influence in my own life so I felt I needed to express that somehow. It was a formative time in my life, if you want to call it that….
Then there’s songs like “Nag Champa”… And, well, if you know what that is… Haha!

8 – I hear a lot of people say that religion is “played out” in music. I think that as long as religion is a dominant force in human society than it is not played out. What do you think?

I don’t understand how it could be “played out”… Religion will never go away and there will always be a need to criticize it.

9 – You’ve obviously got a penchant for remixing seeing as how you have remixed a good many artists. What do you enjoy most about remixing? What is your favorite kind of thing to remix? Is it something you will continue to do on a fairly frequent basis?

It’s fun for me to take myself out of what I’m doing, I can use remixes to explore new ideas and kind of let loose more. If I have the time.
I can find fun in any remix. They’re all different and they’re all challenges. Like I said, when I have the time I dig doing them. I have a few on the go now and just finished one for the new ESA album on Tympanik.

I’ve known DJ Synctank for many years. When Paul started Tympanik I noticed and followed what he was doing with his new label. It impressed me a lot and he brought a lot of great ideals into his business I felt have been lacking for quite a few years. He’s also excited about the music… That plays a huge part for me, or else why are we doing this?
Maybe that’s what people are seeing as the next “Ant-Zen”. S.alt really made sure he had quality music and paid extra attention to the design aesthetics and marketing as well. Overall it makes for a great label when you have so much work put into everything. It really comes through the same with Tympanik.

11 – Are there any bad musicians from Toronto? Seriously, why is everyone there so great at making electronic music?

Nope. We’re all pretty awesome really. Haha, we’ve all made some shite music at times but learned how to hide it better maybe? There’s a lot of support around the city I think for musicians in general, and I think, if they share times like I do, my friends who are musicians and I jam on ideas, and get each others opinions all the time. And it’s f’n cold in the winter so we stay in and practice.

12 – What is next for Displacer? Is it too soon to ask about the next album?

I have a couple of concepts I want to further with the Displacer project. You might see a new project from me as well but, hey, I gotta work to pay the bills… And that always gets in the way of when I want things done with music. I’m pretty excited to try out some new stuff in my studio though, so it might happen sooner I hope.

13 – If you were stranded on an island with Squid (alias It-Clings) and for some reason had to fight to the death, who would still be alive when the rescue boat came?

Do we have Rum on this deserted island? If so I vote for myself. But if there’s no booze it might go to Squid. He scares me sometimes.

— interview by Dan Barrett, originally published in Wounds Of The Earth (October 2008).