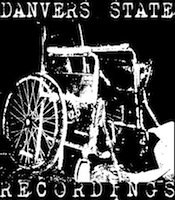 Active since 2008 and solely concentrated on the tape-format, Danvers State Recordings from Providence Rhode Island has proven to be a great addition to the noise-scene and its many sub-genre’s. D.S.R.’s output is not limited towards one style in particular; its output ranges from drones to power electronics and harsh noise and industrial. The man behind the label is Andrew Grant, known to many as The Vomit Arsonist or live member from Bereft, Nau-Zee-auN as well as Terrorfakt. This month the 28th release marks Danvers’ 2nd birthday and therefor about time to not only ask him the 12 questions, but also let him answer … 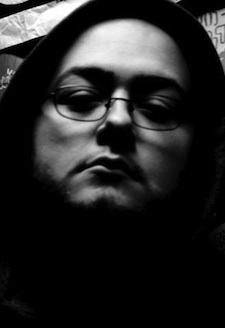 1 – How and why did you come about starting Danvers State Recordings?

In 2008, I’d been thinking about starting a label to release my own material, but I was still unsure as to whether or not I really wanted to undertake the task. I was working in the A/V department of a college at the time, and I noticed we were throwing away hundreds of unopened, unused blank cassettes. I couldn’t let something like that go to waste, so I threw them in my car and took them home. It was at that point where I said to myself “I really have no reason NOT to do this now” and D.S.R. was born.

2 – When you started Danvers State Recordings, were there any labels that you could say were a reference/inspiration for your efforts?

Hospital Productions was a big influence, although if you look at the early releases, it might not be obvious. Something about the aesthetic that Dominick uses really appealed to me; odd packaging, including “extras” with releases, etc. I tried to do that as much as I could. I hit a slump where I wasn’t as able to make such special releases, but I’m pulling myself out as we speak, and I hope to make some much more creative releases in the future.

3 – Almost mandatory question, how did the name “Danvers State Recordings” come about?

If you’ve ever seen the film “Session 9” or if you live in the Massachusetts area, then you know where it came from. If not, I’ll explain. Danvers State Hospital was an asylum in Danvers, MA. It opened in 1878 and was condemned in 1992 – it’s since been demolished and turned into luxury condominiums. Even before I saw “Session 9”, which became one of my favorite films, I had a strange fascination with the hospital, as well as mental illnesses, therapy, psychosis, etc. A lot of really bad shit went down there. It’s where the full frontal lobotomy was “perfected”, patients were tortured, subjected to all sorts of horrible “therapy”, etc.. The hospital started out with good intentions, but things went downhill quickly. As far as naming my label after it, it seemed like a good fit. I can’t really give a concrete answer as to why I chose the name for the label; it popped into my head one day and it stuck.

4 – Since the inception of Danvers State Recordings, are there any events in the history of the label that you’d consider as particularly relevant, from difficulties and setbacks to successes?

I think my first major success was the “Case Studies” compilation. Looking back on it, I wish I’d done it a bit differently, but overall I’m happy with it. It was only the third release for the label, but I think it was the one that made people take DSR a little more seriously.

5 – So far what would you consider as special highlights (or successful) releases and artists in the history of Danvers State Recordings?

It depends on how you define success. The fastest selling release was the Bereft/Sewer Goddess split. I made 70 copies and they were gone in less than two days. I still get emails from people every so often asking where they can get a copy. One of my favorite releases was Theologian’s “A Life of Constant Struggle”. The packaging on that one was killer, and of course, so was the music. That was another quick selling one, and it enabled me to work with an artist (Leech) I’ve admired for a long time. Leech and I had worked together before, the fourth release on DSR was a split between love is nothing. and C.I.R. … that was another one that went quick. I consider all of my releases to be various successes, honestly. If I didn’t have faith in them, I wouldn’t bother releasing them.

6 – Are there any releases in particular that you would recommend as good ‘introductory material’ to the Danvers State Recordings label?

Unfortunately, I don’t do huge runs of releases, so it’s hard to recommend something that people can still find. If you’re somehow able to track down a copy, I’d recommend the “Case Studies” compilation, as it’s the most diverse release. There’s some PE tracks, harsh noise, dark ambient, drone, industrial, cut-up weirdness… it kind of spans a little of everything I like to release. However, if you can find releases by Tearoom Trade, Nyodene D, The [law-rah] Collective, Panther Modern, Mazakon Tactics, Sharpwaist or Theologian, I highly recommend checking them out, as those are some of my favorites.

No real regrets I can think of. There’s a few things I would have liked to have done differently, but it’s nothing that I consider to be a failure or regret.

8 – An obvious question, but what is Danvers State Recordings’ ‘relationship’ with the Internet? From promotion tool and digital sales to file sharing and piracy, how has it affected you?

99% of my promotion is done online. I frequent various social networking sites and message boards and spread the word there. So far, this method has worked out for me – it’s rare that I hang on to a release for more than a few weeks. There’s a few DSR tapes up on music blogs, but they’re all out of print, so I really don’t mind. It’s my experience that for the most part, the “noise underground” or whatever you want to call it, is pretty supportive of DIY labels. There’s no shortage of DIY labels, some of them suck, some of them are amazing. But there’s an audience for everything, so even if you’re one of the shitty labels, someone will throw you a few bucks for a release.

I don’t mind netlables at all. In fact, I got my start (as The Vomit Arsonist) on a netlabel run by a good friend of mine called Traumatic Creations, though they’ve since started doing physical releases. I’ve found a lot of really amazing netlabels with people who put as much effort into a net release as they would if it were a CD or LP. Then again, there seems to be an insane amount of really horrible netlabels who will release anything someone sends to them, because it costs absolutely zero money to produce. It’s a love hate thing I guess. The good ones are really good, the bad ones are really bad. There’s a lot of talk about the death of music on a physical medium, and it really bums me out. I’m one of the few who enjoys the act of getting a CD or LP, looking at the artwork, admiring the packaging, reading the lyrics, and so on. The art isn’t just in the music, it’s in the whole package. I don’t think the physical media will ever truly die. Think of it like this: you can’t go buy some pop-star’s album on LP, but you can still buy LP’s. I think that so-called “mainstream” music will eventually be purchased and distributed through digital means only, but as long as there’s some kind of underground music, people will still produce physical releases. At least, I hope.

10 – Perspectives for the future, what lies in the horizon for Danvers State Recordings? Can you share some long-term goals and where would you like to see the label heading to?

I’m in talks right now with an artist who offered to do a tape for me that I’m extremely excited about – but they will remain nameless, as I don’t want to ruin any potential surprise until the time is right. You can expect to see releases in the near future from Wilt, Dim Dusk Moving Gloom, The Vomit Arsonist+Theologian, Content Nullity, and The Kali Ensemble… And I’m always gathering artists to add to the ever-growing list of upcoming releases. In the future, I’d like to get some equipment and material that will make the process of releasing cassettes easier for me. And of course, like a lot of people, I’d love to start releasing vinyl. But that’s quite the costly process, so we’ll see what happens, I guess.

I’ve said it before, but I can’t praise Phage Tapes enough. Sam is a great guy who knows his shit, and his releases are always professional and really well done. I own a decent sized chunk of his releases, and they’re all equally great. Another label that never fails to impress me is Destructive Industries. Thomas is a good friend of mine, he’s extremely easy to work with, and he always releases really amazing stuff. He’s got some real killers on his label for sure. As far as artists go, I’d say that people really need to start paying attention to the Midwestern US. Nyodene D, Murderous Vision, Disgust, Deterge, Gnawed, Grain Belt, Skin Graft, Custodian…. the list goes on. All of those guys, with the exception of Grain Belt, Skin Graft and Custodian, have had releases on DSR, and there’s a reason: They’re all fucking incredible. I’ve been to the midwest a few times, and I always found it to be full of fat, boring people with dumb accents, but I’m starting to think I was wrong. There’s gotta be something in the water there… the noise, industrial and power electronics that come from that part of the US is some of the best I’ve heard in years.

Thanks for the interview. Just a few quick links before I go…