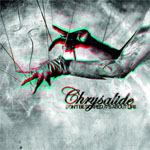 The self-proclaimed electro-punk-noize-terrorists Chrysalide have returned with their second full length album, “Don’t Be Scared, It’s About Life” – and what a disc it is! Though many people will make obvious Skinny Puppy comparisons, this album is no mere clone. It could easily be the soundtrack to someone’s nightmares or in the day of an insane asylum.