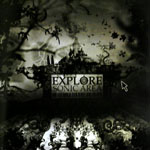 “Explore” is the much-anticipated new offering of Sonic Area, the solo sound project of French sound artist Arnaud Coeffic, one of the founders of the Audiotrauma association, a collective of French sound artists which, in recent years, has gained notoriety for the quality and creativity of its often ground-breaking output. If there were any doubts as to Sonic Area’s talent and proficiency at sculpting highly immersive and organic sound constructs, especially after the release of his previous album “(insensé)”, this is another (definite) proof of his skills and inventiveness. With “Explore” Sonic Area succeeded in surpassing expectations, which were comprehensibly set rather high after his previous album.
With this aptly-titled release, Sonic Area takes the listener on a disturbing and involving exploratory journey to the dark corners of the human psyche, the areas where instincts such as primal fear reside. In a way, “Explore” can be compared to the best traditions of horror literature and cinema in that the subject matter is never approached directly but rather through a suspenseful narrative of sonic shadows which grabs the listener’s attention and effectively guides him to complete the picture with his own subconscious anxiety and fears.
Throughout “Explore” there is a constant feeling of tension, that is never released, at best it is partially alleviated from time to time, only to be increased or replaced with a different sort of tension immediately afterwards. Sonic Area creates this effect through an excellent series of linked immersive soundscapes built around sound collages of masterfully chosen and assembled samples, permeated by haunting drones, minimal melodies, unnerving bass and impacting percussion. The seamless flow from the violence of “Que les larmes me viennent” to the fatalist “Les morsures d’octobre”, through hallucinatory (“Les caresses de serpent”) and frightening (“Le silence me terrifie”) episodes as well as the antithesis of release which is “La petite mort”, makes “Explore” even more addictive as an aural experience and enforces the notion that this album can only be truly appreciated as a whole. The surprise at the end of “Les morsures d’octobre” is also a nice (and somewhat unexpected) crowning touch to the album.
Half-way through the year, the cocktail of tension and primal fear that is Sonic Area’s “Explore” is definitely one of the best releases to come out in 2007 and the confirmation of Arnaud Coeffic’s talent as a sound artist capable of creating organic and enveloping soundscapes, reminiscent of the works of David Lynch and H. P. Lovecraft.