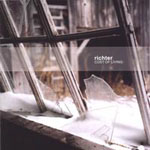 CD, Sound as a Weapon, 2005
www.richtermusic.com

If it weren’t for the emotionally driven, dark, and twisted lyrics, Richter might be mistaken for a cheery sort of band, bent on making the world a happier place. This is not the case, thankfully, and Richter’s “Cost of Living” is a magnificent specimen of psychologically-charged and intelligently coordinated electronic music.
Very well-thought-out lyrics sung in a monosyllabic fashion add a sense of disconnected passion to the music, and may seem a little out of place coupled with the uncharacteristically poppy harmonics, but add quite of a bit of pleasing entertainment to the overall quality of the album. Richter delivers their bitter, cruel version of entertainment with every single track they’ve recorded on “Cost of Living”. That, in an of itself, is worth more than anything to an audience, considering the vast majority of musicians could never claim to complete as solid an album in their entire careers. Being that it is their first album, the production values could use a little work, but a contract and a quality studio can fix that tiny issue in a heartbeat.
A very strong debut from a very talented duo, Richter’s “Cost of Living” is definitely worth picking up. Final score: nine out of a possible ten habanero peppers.