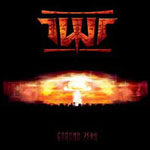 “Calling you to help me play my role”, screeches IWR front man in a song imaginatively titled “Calling You”, and it was this, the only line on this highly unpleasant debut album, which really said anything to me. It made me realise another reason why I so intensely dislike the current trend known to some as ‘Harsh EBM’, ‘Terror EBM’ or worse still, ‘Hellektro’. This particular spooky subgenre of electronic music is all about playing a role, and as popular as it with many young people of above average education, I cannot help but hate role-playing. The character in question might be less obvious than the gothic vampire or heavy metal warrior, but the futuristic, post-apocalyptic anti-hero of dystopian nightmare is clearly a favourite amongst role-players favouring more industrial imagery.
The relentless, screeching, distorted vocals used ubiquitously by all bands in the genre attest to this masking of the individual responsible for the music, and demand the listener to step into their dark and disturbing fantasies. Screaming about wars, lies, pain and technology, I find listening to IWR to be a very depressingly familiar experience. It would appear that even the most fervent followers of the dark EBM scene may find it difficult to choose this album over another similar release.
With the role-playing analogy in mind this music is in some ways like an electronic version of thrash metal, hard and dark enough to inspire many less demanding listeners of suitable inclination. The driving beats will certainly lead to plenty of movement on any EBM dancefloor, although the levels on the percussion frequently sound all wrong. The compositions are of a standard approaching adequacy; they have the appropriate mixture of aggression and tortured emotion, none of which is very convincing. But whenever they try to inject a slight spark of originality things go awry, from the Middle Eastern melodies on the opener to the incongruous guitar solo somewhere in the middle of the album.
The imagery on the artwork is so clichéd it’s untrue, with computer enhanced graphics depicting a mushroom cloud, bombs, X-rays and biohazard symbols, not to mention the cringe-worthy shots of serious-faced band members. The unnecessary inclusion of a bonus remix disc drove me further to despair, the attempts to move away from the genre slightly providing some horribly unlistenable sounds. “Carnivore – start the war, spreading out pain and beg for more”, one of many embarrassing lines in this album; I’m afraid I could only ask politely for less!