Zhelezobeton is a label and distributor of all sorts of experimental, noise, industrial and other not so conventional music. We release in small editions the music of our friends and distribute the releases of other labels which are more or less spiritually close to us. We have two sub-labels: Zhelezobeton Film for releasing video materials and Muzyka Voln for releasing music in more definite ambient/drone direction. 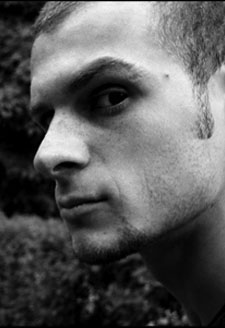 1 – How and why did you come about starting Zhelezobeton?

We started Zhelezobeton in 2002 with a couple of my friends. At that time we didn’t know much about the ‘experimental’ or ‘post-industrial’ scene, but we liked some unusual music produced by our friends and ourselves too. We really enjoyed it and wanted to bring it to people who could find it nice too. So it was decided to make a small handmade edition of the recording of Cloning Experimental Failure (our friends’ digital hardcore band from Pskov, Russia), and that’s how the first release was made.

2 – When you started Zhelezobeton, were there any labels that you could say were a reference/inspiration for your efforts?

Well, we didn’t know many labels at that time actually, just heard such names as Cold Meat Industry, Drone Records, Tesco, Staalplaat, Ant-Zen, etc. But I can’t say we were really inspired by any of them particularly. We were indeed quite enthusiastic because we just discovered a whole new world of experimental music and almost everything about it was exciting for us.

3 – Almost mandatory question, how did the name “Zhelezobeton” come about?

“Zhelezobeton” is translated from Russian as “ferroconcrete” or “reinforced concrete”. I can’t remember exactly how we came up with this word as the label’s name, but at that time we used to hang around a huge abandoned ferroconcrete frame of an industrial building near Narvskaya metro station here in St. Petersburg. You know, just walking around there, drinking beer, talking about music, etc. So I guess that atmosphere and industrial feeling had an influence on us when we were choosing the name.

4 – Since the inception of Zhelezobeton, are there any events in the history of the label that you’d consider as particularly relevant, from difficulties and setbacks to successes?

The main success was developing the mailorder connected with the label to such an extent that it allowed me to dedicate myself to this, as the main occupation in my life. When the label was started no one could even imagine or dream about it as it was just a pure hobby for personal fun. But somehow the degree of involvement into these processes has been constantly increasing and one day I understood that I have no more strength for both a ‘normal’ job and running the label and mailorder. So I had to decide what to do further and I’m pretty happy with my choice now!

As for difficulties, the main problem has always been lack of time and finance to release more interesting music. I also had to switch from totally handmade releases to a more ‘factory-made’ style, so now it’s not that easy to just wish and quickly make a release, as it was before. But still this is not a very serious problem :)

5 – So far what would you consider as special highlights (or successful) releases and artists in the history of Zhelezobeton?

This is not an easy question because every release is something special for me, and I do like them all without any obvious preferences. Making every new release brings a lot of personal pleasure, a feeling of doing something good, you know!

But if you mean public appreciation, the most popular releases were from the Swedish artist Peter Andersson (Grismannen, Cataclyst), Canadian artists Aidan Baker and The Infant Cycle, the edition of a rare Soviet sci-fi movie “The Space Voyage” with a new soundtrack from Vetrophonia and the compilation of Russian dark-drone ambient artists “Muzyka Voln” on our new sublabel with the same name.

6 – Are there any releases in particular that you would recommend as good ‘introductory material’ to the Zhelezobeton label?

Well, again, it’s hard to pick out something ‘typical’ or ‘introductory’ as all the releases differ a lot from each other bringing together a whole bunch of stylistic terms, such as ambient, radionoise, digital hardcore, drones, EBM, many kinds of electronics, songs, etc. They are all like multiple facets of a single crystal. Maybe later we should make a sort of sampler for introduction purposes.

I don’t really know, I’ve always tried to make everything as good as possible, and if I did anything wrong it’s not possible to change it anyway, so for me it’s better to think about present and future actions!

8 – An obvious question, but what is Zhelezobeton’s ‘relationship’ with the Internet? From promotion tool and digital sales to file sharing and piracy, how has it affected you?

Zhelezobeton has always been related to the Internet. Since the very beginning we had a website and a newsletter and all the contacts were made via e-mail. So we owe all our relative publicity (at least among Russian non-conventional music lovers) entirely to the Internet.

As far as I can see, piracy (and especially piracy in Russia) is a very popular cause for complaints for many musicians and labels and sometimes it even leads to ridiculous things. Of course, this is an ambiguous question in general and I can’t encourage people who make money on stolen stuff, but at the same time I have no objections to the positive effects of free sharing.

You see, in my opinion, there are two totally different kinds of people: those who buy CDs and those who don’t. The time when records and CDs were the only way to get some music is gone so these physical artefacts remain only for those who really love not only music, but something more behind it. When you buy a CD or a record you give some homage and support to the whole process, the result of which you can feel in your hands. Zhelezobeton releases music for this kind of people.

But I also have a lot of friends (and I often do it myself) who are content with just downloading some mp3s for free, listening to them and enjoying the music itself. And it’s fine that they can do it! It’s just like listening to the radio station of your own choice. After all, the goal of any real musician is not to earn as much money as possible with his music, but to make the listeners feel something about it, to find a way to the listener’s soul with sound and this is not valued with money.

Netlabels are great for promoting music, for those musicians who don’t find it necessary to produce their music in physical forms and for those listeners who don’t want to stuff their shelves with material garbage!

As I mentioned previously, some time ago people just didn’t have much choice: if they wanted some music, they had to buy records, cassettes, CDs, or just listen to the radio. Now they can easily get it for free and here lies the line which divides the majority of normal listeners and the minority of those who are strongly devoted to music, melomaniacs and collectors, who can find a whole different world in music. These people will of course need ‘proper’ physical releases. But judging by the fact that people in general are falling more and more into perfunctory mass consumption, this is a dying breed.

10 – Perspectives for the future, what lies in the horizon for Zhelezobeton? Can you share some long-term goals and where would you like to see the label heading to?

Well, my goal is to develop the activity of the label, sublabels and mailorder further. I would love to have a possibility to make more releases in the future as I know there are a lot of interesting artists whose music is worth hearing, a lot of them here in Russia. Perhaps I should start a separate series of rather inexpensive and easy-to-make releases to make this possible.

It would be also great to make more video releases on Zhelezobeton Film (there is some material with video art and concert videos planned) and Muzyka Voln (the sublabel for calm ambient music). We’ll see how it goes…

Well, the experimental scene in Russia grows like a weed so there’s pretty much to explore. Aside from relatively known artists like Bardoseneticcube, Lunar Abyss Deus Organum, Noises of Russia, Cyclotimia, Closing the Eternity, Cisfinitum and some others, I can mention yet less known acts like Kshatriy, Maroon, Vresnit, Hladna, Exit In Grey, Hum, Neznamo, i.m.m.u.r.e. and Glasberg.

These are actually just short lists of names which came to my mind at the moment. Much more information on the Russian scene can be found browsing the link section of the Zhelezobeton website.

Thank you for the interview. Hail to all of us!