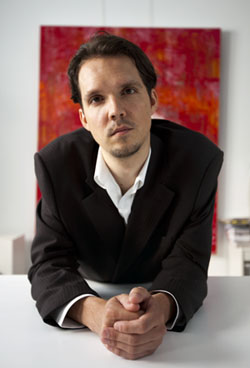 Peter Vanek (or Peter Van Ewijk to his friends) is a man of many guises. Regular readers of Connexion Bizarre may already be aware of Kilowatts & Vanek, his joint project with Jamie Watts, but there’s a whole lot more to this man ranging from his own solo material to Dutch cabaret through to a Mediterranean influenced new music project.

1 – How would you describe your music to someone who has never heard it before?

I think I wouldn’t because in the end everyone probably hears something different. I can definitely say that I’ve been influenced by a very diverse range of music styles, from classical to techno, jazz to punk and traditional Japanese court music to white noise. But if you insist on me delineating it, I’d say it tends to be a mix between singer-songwriter and soundtrack music. I never have a particular style in mind. I just go with whatever music I want to make that particular day. Sometimes I program some sequences, other times I play the piano and add glitch beats and these days I seem to be drawn primarily to playing live a lot and enjoying a well placed chord.

David Foster Wallace once said in an interview that good literature needs to click. I’d like to say the same thing about music. Every now and then, you get blown away by a certain track. You’re sitting in your car, driving wherever, and all of a sudden, there’s this song on the radio and you just need to either pull over and catch your breath or put your full weight on the gas pedal and fly. Great music flicks on some sort of switch in your brain. At the moment, Gossip is really doing that for me. It opens up the dopamine floodgates and I go into freakmode. I usually need to listen to Sigur ros, Bon Iver, Fleet Foxes, Beirut and Damien Rice to mellow out again (not all at once of course). I’m not really in an electronic mood these days. I tend to put on a lot of sixties music, especially The Kinks and The Mamas & the Papas. Don’t ask me why though. It must have something to do with this warm weather.

2 – How does your solo work compare to Kilowatts & Vanek? Or is there not much basis for comparison?

I don’t think you can compare the two beyond the fact that I have my share in them. Jamie (Kilowatts) brings such a distinct sound to the table, you can’t emulate that. He has a certain feel for electronics and syncopated rhythms that I haven’t heard elsewhere. The Kilowatts-touch is so unique and thus incomparable. The electronic sound I add to my songs is much more basic and is often kept to a minimal, except when I’m going for complete mayhem. However, somehow the atmosphere of both projects is equally compelling for me personally. You can compare it to travelling a similar road, but one does so by foot and the other by jet-pack, on speed with a hot chilli in his ass.

3 – How do you approach writing for each of your projects? I know with Kilowatts & Vanek this was all done via email with Jamie (Jamie Watts, Kilowatts). Do you have a certain approach or is it more organic?

I usually start playing the guitar and every now and then something sticks and I keep playing it again and again, until it somehow transforms into a song. When I’m working on my own songs, I usually wait until the song is as good as complete before I start recording it and adding other instruments and – if I feel like it – electronic sounds. When working with Kilowatts, it is more of a shared experience, where I just collect ideas, pieces of text, melodies, chord progressions, and send packages of them to Jamie. And this works both ways. Jamie, does the same, and we start adding, what we feel would contribute to the other’s ideas, which usually leads to, very intuitive compositions. The beauty of working with Kilowatts, is that we both grant each other a lot of freedom, so that these songs are actually real explorations of an area that has appeared when our particular musical interests started to intersect.

When I’m working solo, I don’t really know where a song will end up, although I usually go through phases in which I seem to produce similar sounding songs. But, at the same time, I might shift from electronic music to Latin to singer-songwriter and so on. Kilowatts & Vanek is a bit more delineated, but fortunately large enough to keep exploring. It is also rather uncharted territory, I might add, when it comes to larger musical scene. But that is of course just my opinion. 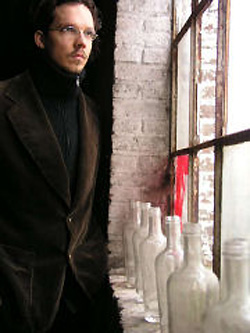 4 – Do you ever have problems with writers block? If so, how do you defeat that?

I don’t necessarily have writers block, but I do tend to need recharging moments, or however you want to call that. I’m usually able to write a song, but the less I feel inspired, the crappier the song will turn out. So I oblige myself to take time-outs and listen to a lot of other music, watch movies, live life, just to fill myself up again. The fact that I’m active in various projects also helps defeat the notion of repetition and it fuels me and motivates me to dig deeper and improve each time around. Moreover, every project teaches me something new and in the end, that’s what I’m looking for the most: evolution, mental enrichment.

5 – You have signed to Summer Rain Recordings for your past two EP’s (Polaroids and This Belief); what was it about them in particular that made you want to sign? I know they have a strong ethical outlook (artists donate 5% of sales to charity and the label matches their donation), was that something that made them different?

My decision to join Summer Rain was definitely based on this ethical outlook but also on the very warm and professional attitude of the label-owner, David Holmes, who showed a great deal of enthusiasm toward my music and basically allowed me to create whatever I want. He is a very driven and inspirational man and in these rather uncertain times, such a person can truly lift you up and over. Moreover, he succeeds in bringing together a pool of artists who are all able to touch me with their music and like I said in a previous question, if I need recharging, the label’s catalogue is often a good place to start. Having said that: www.summerrainpromotions.net

6 – Talking of record labels, Dependent are back and have picked up Kilowatts & Vanek’s ‘Focus & Flow’ to re-release. This was released digitally originally, how do you feel about this finally coming out in a physical format? Do you think Mp3 is going to be the future, or is there still interest in physical releases?

I’m absolutely thrilled. Though I love the speed and directness of digital albums, I can’t get around the feeling of owning a physical copy, complete with booklet, lyrics and some tasty artwork. In a way, I consider a CD or a record for that matter to be similar to a painting. You start out with this big white canvas of silence and you carefully add and remove until you end up with the song that catches the atmosphere you want to convey. But then, adding a booklet and texts and artwork, is a lot like putting your project in an appropriate framework, lighting it out to make it stand out even more. I do believe MP3 will be here for quite some time, but then again, nothing beats the experience of having multiple senses touched, so I’m not to worried about the future of physical carriers. Furthermore, we are so fortunate to work with Stefan Herwig, who is very passionate about music and who will work his behind off just to make sure that his artists are able to enjoy the fruits of their labour. It’s one thing to make music, it’s a completely other thing to throw it out there. I’m all for projects like MySpace, ReverbNation, Facebook, Imeem and for those of us who are able to browse these places 24/7, they might offer some real undiscovered gems, but for most of us, we don’t have the time to filter through the millions of bands. In the end, it’s nice to know that some people, like Stefan, lend their ears to do that job for us. As a consumer, you still have the liberty to disagree and look for yourself.

As an artist, nothing really changed with all these music sites. Sure, you can now put your music up and sure, people will listen, but because of the low threshold of these sites, your sound gets drowned out by a million others as much as it did when the only option you had was sending your demo to a label and hoping it would stand out. Different package, same content.

7 – Another of your projects that you’re involved in is a theatre project, purely in Dutch. How did this come about?

I have been dreaming about theatre my whole life, so it was only natural that I tried to get myself on a stage. The thing I do, is something very particular for The Netherlands and Belgium. We call it ‘cabaret’ and it’s a combination of a storyline, songs, funny anecdotes, neatly wrapped in a stand-up show-kind-of-delivery. It’s actually way too hard to define it, so for those of you that are able to understand Dutch, try and catch us on stage. We’re called “Lankmoed” and we’ll be touring through Holland from September until December. Be warned though, it has nothing, even remotely, to do with my other projects. It’s all about life, love, death and frustration, nicely sugar-coated by a couple of ‘kleinkunst-songs.’ I’m talking gibberish here, I’ll stop it immediately. Find us on Facebook! Hooray for product placement. 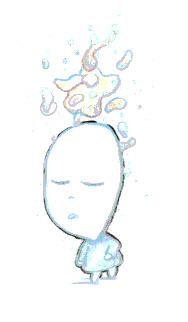 8 – What else do you have coming up with your music? Can we expect any more EP’s, or maybe an album this year?

Well, September will see the physical release of “Focus & Flow” by Dependent. I’m not quite sure if I’ll be releasing some new material this year. I still have some business with Lankmoed and I’m on the verge of recording for a new project called Fisher ‘n Blume, together with Lankmoed-colleague and friend, Jan. Fisher ‘n Blume is a very Mediterranean project, with Tex-mex, Latino, French, Greek and Balkan influences and it’s especially great music to listen to when you’re somewhere warm, drinking pastis and are about to stumble home to make mad love with whomever!

9 – I think this question is merely to appease my own sense of curiosity, particularly with the news of “Focus & Flow” finally getting a physical release. Any chance of a new K&V release, or live shows for either K&V or yourself?

I could basically tell you anything but in the end I’m sure of only one thing and that is that stuff happens. At this point, however, I have no idea what that stuff is exactly. How is that for avoiding the question?

10 – Ah, very clever, curiosity shall go wanting for now, but in the meantime is there anything further you’d like to add for us?

Yes! Whatever you do, make sure you do it with a ferocious intensity for only then you’ll understand why other people frantically run after their dreams in the hopes of catching one of them. And if you ever catch me driving frantically fast, making weird lip movements, now you know why!