“Spectraliquid is an independent music & art label based in Athens, Greece that came to life in Summer 2006, in order to deliver high-quality extreme experimental soundscapes and visionary art. We are here to set off innovative performances, out of limits, against conservative and mainstream perspectives. Expressing a vast range of quality music, whether this is ambient, d’n’b, dubstep, idm, abstract electronics, experimental or noise, techno, industrial etc. as well as supporting new media graphic and motion design, Spectraliquid stands out as a unique art & music label. We accept no limitations. No restrictions made possible and no conservative forms of expression belong here.” 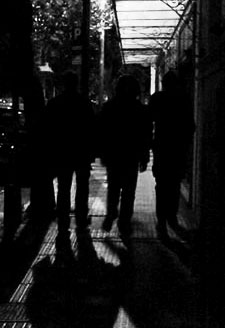 1 – How and why did you come about starting Spectraliquid?

We were sick of all this mainstream music in Greece – neo-pop mixed with cheap middle-east shit. There are a lot of amazing artists here that the majority of people and press ignore. We wanted to unite them and have one string voice, so we started as a team organizing underground events in Athens back in 2006, but we exist as a label about one year and a half ago, when Blackfilm’s music got our attention. Kostas a.k.a. Subheim said “hey man, people have to listen to this artist, this is some fucking wicked music!” Blackfilm’s album is a priceless gem, I am very happy that we had the chance to release such an awesome album.

2 – When you started Spectraliquid, were there any labels that you could say were a reference/inspiration for your efforts?

Of course, Ant-Zen & Hymen were a major influence for Spectraliquid, in addition to labels such as Ad-Noiseam, Planet-Mu and Ninja Tune, just to name a few.

3 – Almost mandatory question, how did the name “Spectraliquid” come about?

It’s a combination of the words ‘spectral’ and ‘liquid’. It came out quite spontaneous one summer in a Greek island when we were brainstorming about forming an experimental collective with Subheim, one of the core members. We were thinking something experimental like a test-tube. I said ‘Spectral’, he said ‘Liquid’ and then we had a name. I like to think of it as a green energy fluid, the essence of the best music in the history of mankind, distilled into a living organism with the form of a liquid, discovered by some mad scientists. Quite visionary…

4 – Since the inception of Spectraliquid, are there any events in the history of the label that you’d consider as particularly relevant, from difficulties and setbacks to successes?

When we started organizing the events we had only 50 people attending. Later on, we grew bigger. The Bong-Ra gig had 300 people, which was a big success for the Athenian scene, but we also had some troubles, people were fighting to see the show free without paying a minimum ticket, my friend at the door was thrown down on the floor while people were stepping on him shouting “BREAKCORE!” I couldn’t believe my eyes, it was like a Mötorhead gig, totally crazy, Bong-Ra played for 2 hours because people wanted more and more Breakcore and everyone went into a frenzy.

5 – So far what would you consider as special highlights (or successful) releases and artists in the history of Spectraliquid?

We always have quality releases with Spectraliquid, we constantly try to push the musical boundaries to new levels. The Blackfilm album was sold out in a few months. The “Mutant Dubstep” series of EP’s are considered as a new breed of dubstep for some people. Well-known and respected artists like Cardopusher, Ebola, Detritus (as A Wake A Week) and others whose names I cannot reveal yet want to release their music with us, they trust the label and the philosophy that lies behind it. Spectraliquid respects the artist’s personal vision since it is a label founded by artists. Music comes first, that’s the main concept.

6 – Are there any releases in particular that you would recommend as good ‘introductory material’ to the Spectraliquid label?

The “Konkrete” compilation is a short trip to the label’s sound. We are open- minded and we love all kinds of music. Each release is totally different, ranging from ambient to dubstep and noise, from jazz to orchestral, d’n’b or IDM. We like to explore the underground, so you have to carefully listen to everything, in order to have a clearer view.

I cannot regret for anything, neither the other members as far as I know. Except that we didn’t like the logo at the beginning, but we decided to keep it because it has become something like a cult icon now. Hehe…

8 – An obvious question, but what is Spectraliquid’s ‘relationship’ with the Internet? From promotion tool and digital sales to file sharing and piracy, how has it affected you?

The Internet is a powerful tool. It helped us promoting the label and our artists around the world and I spot new artists through the web mainly from MySpace and Last.FM. It has also proved very useful for A&R. So, the Internet is vital and necessary for the label.

On the other hand, we have piracy and downloading making it hard for the labels to sell 500 copies around the globe. As a result, I foresee that labels will become extinct at some point. Spectraliquid exists only due to our endless love for music, so if we had other priorities such as profit, we wouldn’t be able to continue. I am receiving all these demos that I want to release but I can’t, I just don’t have the money for it, so we have to pick the very best. You know our first releases were financed from our grandpas and grandmas…

Overall, the net gives the opportunity to unknown artists to show their work and become known, so that can all be received as good news to me.

Netlabels may be the future, there are a bunch of wicked netlabels like Acroplane and 33 recs out there. CDs tend to get extinct, MP3’s are on the wheel now which by the way is the worst sound quality format, but people don’t care about it. Vinyls are mostly bought by collectors and dj’s nowadays.

I personally hate the digital form of music because you tend to lose too much of the concept that the artist had originally in mind. You see, music comes with the package, the illustration and all around it, imagine the Future Sounds Of London’s “Dead Cities” without its psychedelic art. It is a mirror of the inner world of the artist and it accompanies the music. I like holding a record, feeling it, passing it onto a friend – an MP3 file has no soul for me.

10 – Perspectives for the future, what lies in the horizon for Spectraliquid? Can you share some long-term goals and where would you like to see the label heading to?

I would like to see the label uniting all forms of electronic music under one roof without boundaries, giving a motivation to more and more people to listen and understand what electronic music is about. Keeping a profile away from the mainstream and all the marketing limitations, promoting pure innovative art. A home for all the strayed musicians.

As for our future releases, there will be a co-release with Tympanik Audio of Access to Arasaka’s debut album (don’t forget to check out this amazing artist on MySpace). We will also press some vinyls so just to name some, a 2×12” “Mutant Dubstep” boxset and a collectable new 12” Blackfilm EP are on the plans. Also new stuff from veteran well-known artists that I still can’t reveal, will cause some serious ear damage out there. Stay tuned!

Uncompromising labels such as Ad-Noiseam and the Sending Orbs electronica label.