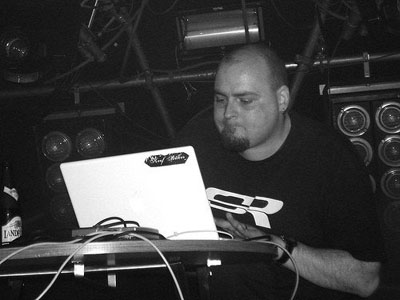 Since his debut release in 2004 of “The Widnes Years”, Keef has gone from strength to strength in his music, and has now reached album number four in the form of “Pen Fifteen” – a double album laced with extreme b.p.m. counts, strange track titles, and 60 minute dancefloor-friendly anthems, amongst the gorgeous downtempo electronica Keef has become renowned for in the last few years. Keef was happy to speak to us about the new album, his views on promotion, record labels and just why “Mr Snugglebunny’s Happy Paradise is Slowly Turned Inside Out”…

Well, if nothing else there are a lot more real instruments and a lot less broken beats these days.

I think when I wrote the “Widnes Years” I had a specific sound in mind, a sound I didn’t think many people were doing. Then I got further entrenched into the music scene and found it was a field that already had many different artists working in it and was far, far from bereft.

I think at that point I stopped aiming specifically at one thing and just let myself write what I wanted. So the evolution for me has really been in moving slowly away from the IDM/Breakcore hybrid that was the first album and trying to make something that is more ‘me’ than anyone else.

As to the future, I don’t really know myself. It’ll be news for me too.

2 – Did you honestly believe you’d make it to album number four? Does the process of making an album get harder with the more releases you have?

For me the process of writing is always hard. I’m always convinced that the album I’m working on, or have just finished is my last ever as I don’t want to put myself through that again. But like a crackhead I seem to keep crawling back for another taste, unable to break the cycle of addiction.

However, there is definitely a difference after the first album. When you’re writing the first album, nobody has any expectations, so no bar has been drawn. After that there’s a bit more pressure because if it isn’t better than the first people will start the, “he’s not as good as he used to be”, vibe which can feel quite draining.

I think after the second one it’s a bit easier though as you know what to expect and can cope with it better.

3 – You’ve been on a number of excellent labels in the past (N5MD and Ad Noiseam to name a couple). You released your last album “Redeye” and will also be releasing “Pen Fifteen” with Hymen. Was there a particular reason for working with Hymen again? Were Hymen’s releases to date an influence on your decision?

Well, I’ve not meant to be a label hopper, it’s just happened like that through strange twists of fate and circumstance. Of course, Hymen for me are a biggy. That imprint has some of the best music both historically and currently. I mean, Snog, Gridlock, Ginormous, Beefcake, Somatic Responses, Tonikom, Architect, Nebulo, and that’s just off the top of my head.

Every label boss I’ve worked with has been brilliant, I’d be happy to release with any of them again, they’re all highly prestigious labels and all release brilliant music. I think for me, Hymen is ‘best fit’. Stefan is willing to go along with my insane ideas, some of which may happen some of which may not.

4 – What major influences have you had during the making of this album? Not necessarily musical, as music can be influenced by many different things… I suppose the question I’m asking is what shaped your life during this time and ultimately helped you create “Pen Fifteen”.

To start off 2008 hasn’t been the best year for me for a number of reasons. That’s always going to have an effect and, as a result, I think “Pen Fifteen” is a more ‘down’ album than Redeye was.

Also I started to question myself as to what I actually wanted from music and why I was still doing it after all this time. You see, when “Pen Fifteen” comes out it will be 20 years since I picked up my first guitar and music for me has been like an abusive lover. I didn’t find any specific answers but I think the mental journey certainly affected the outcome of the album.

5 – Did you go in to making this album knowing you wanted to make a double album, or was it something that just happened unknowingly?

I wouldn’t say I went into it knowing I wanted to do a double album but I’ve been wanting to bridge the gap between how my records sound and how my live set sounds for some time and I couldn’t quite figure out a way to do it. I had numerous ideas, like a separate album based around a free event where people could see it being created, a 12″ record with a 12-15 minute track on each side and then it came to me when looking at Hecq’s 0000 album. Why not do a double CD?

Stefan agreed, so I created the 61 minute track, “Light City” which makes up the 2nd CD. I sent it to Stefan and he was completely up for it. I’d say, even though it’s an hour long, it’s definitely the most dancefloor track I’ve ever done. Which is amusing considering that “Pen Fifteen” is the least dancefloor thing I’ve written.

6 – What are your feelings about playing live? I’ve had the opportunity to see you play live a couple of times and both were very different shows – do you approach your live sets from a purely improvisational perspective or do you have a general idea? How do you think “Pen Fifteen” will work live?

I love playing live, it’s great. Well, my live sets are improvised but you get a feel of a room before you go on, you get a rough idea of what the room wants, so I begin to think how to start it off.

The only thing I know for certain when I walk on stage is what I’m going to do in the first minute. I let the rest flow based on my feelings and the feel of the room. I guess that’s why I love doing it because the music people are hearing is as new to me as it is to everyone else in the room!

“Pen Fifteen” live? Well, some parts of some tracks will make it into the live set but you won’t get full tracks or anything as that’s not the way I work with that stuff.

7 – What’s your take on online promotion? A lot of artists do a lot of self promotion online, but I’ve noticed that you’re fairly quiet in comparison to others. Is it just one of those things that’s become a ‘necessary evil’ of a sorts?

I have to admit it’s something I don’t like. In a lot of ways I don’t feel comfortable shoving myself down other people’s throats (ooer) I’d much rather be the musician people are introduced to through other people than the musician who nearly bullies people into listening to his stuff. Plus I’m lucky to have had releases on great labels that people go to as a matter of course.

I believe that anyone who would be really into my stuff has probably heard of Hymen anyway and therefore will have at least seen my name before. Therefore, I’ll let people know it exists and then sit back and let them make their own decisions.

I actually like the fact that there are still people who come to a gig where I’m on the bill and they don’t know who I am. They then have the chance to decide for themselves whether they like it without any previous bias.

I’m not here to take over the world or make huge amounts of cash. I just make music and people can like it or not, I’m not going to try and force them or “game” it.

That said, I like some of the things some people consider as promotion such as gigs and well, things like this really, but they don’t feel like promotion to me, they just feel like a bit of icing on the cake.

8 – You have a very varied taste in music. Do you try and get that across in your music? I ask this as you mentioned one track ends up at 910bpm at one point and one track has a grindcore mid-section, so I’m a little curious about that one…

I absolutely do. Some people pick up on it, some people don’t. It should hopefully be more obvious on “Pen Fifteen” than my previous releases, but that’s up to other people. I can’t be the one to say it succeeds, I’m too close to the material.

There’s certainly a lot more metal and post-rock on this album, and I guess one way to describe it is like “Redeye” crossed with Jesu. There’s also a jazz and prog-rock influence in there, as always.

I try and put all sorts of things in there because I don’t feel people should be loyal to just one genre and I don’t feel I should be in my music either.

9 – “Pen Fifteen”, as well as some of your other releases to date, have some very interesting song titles. One that amuses me is “Mr Snugglebunny’s Happy Paradise is Slowly Turned Inside Out”. Do your song titles have any meaning? Or is it whatever you feel like calling them at the time?

It all depends, some do have meaning, some are just what I feel like calling them. Believe it or not, “Mr Snugglebunny’s Happy Paradise is Slowly Turned Inside Out” is one of the ones that means something. The track starts as a happy, twee little ditty with birds tweeting in the background and slowly gets darker until it ends up with a horrible distorted mess at 910BPM. So the happy paradise at the start is turned inside out by the end.

Also some have vocals so the titles are related to what’s being said or sung in the track. I try and put a lot of local things in there as well because people may call tracks, “Sunset Boulevard”, but you never get anyone naming a track after, “Sheepscar Junction” in Leeds, for example.

Well, nobody except me.

10 – I know some artists feel a certain sense of ‘decompression’ once an album is released; How do you personally feel when you’ve released an album? Also now the album is near enough released, will you be working on any other projects – for example, I remember you working on a book a while back; will you be doing something with that, or similar?

There are a few non-musical things on the horizon, book writing, scriptwriting, comedy, film things, all sorts if any ever happen.

I also may start playing about with some side projects such as the EBM parody Mandro1d, the cyber-grindcore band Crackpuncher or the powernoise act Sharps Injury but I couldn’t say…

I may just end up playing Playstation 3 and getting drunk for the next couple of years.

11 – Finally, are there any other releases from other artists you’re particularly looking forward to this year?

Loads! Off the top of my head there’s new Mothboy, Detritus and Marching Dynamics on the horizon. I’d love some more Ben Folds as well, but we’ll see. I have high hopes that 2009 is going to be a great year for music.