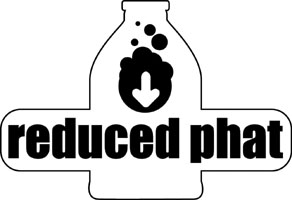 Reduced Phat is one of the best known labels for breakcore, jungle and electronica in the US. Featuring artists such as Edgey, Bong Ra and Enduser, it is ran by the inimitable Vanessa Vy, a strong woman in a mostly male dominated culture. 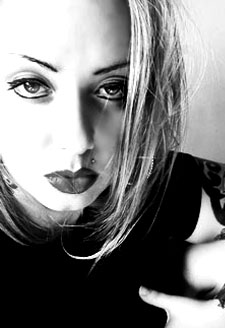 1 – How and why did you come about starting Reduced Phat?

I always promoted musicians and helped out with labels if and when I could, I was becoming disappointed with the direction some labels were going and also the lack of good US labels. Plus I enjoy music, I live for it, I just wanted to release more good music to make a few more people happy.

2 – When you started Reduced Phat, were there any labels that you could say were a reference/inspiration for your efforts?

I can’t say any one label was a reference but at the time I created Reduced Phat I was really into Schematic & Chocolate Industries.

3 – Almost mandatory question, how did the name “Reduced Phat” come about?

I will admit I am terrible with thinking up names and I did not want anything too serious. I wanted it to be a fun name. Honestly, I struggled with it for awhile. I opened my fridge one day and there was a ½ gallon of Reduced Fat milk and a light bulb went off. Some loved it some thought I was nuts when I told them I was going to use milk. Of course Reduced Fat is a Design firm and I didn’t want to struggle with not being able to use a “.com” and settle for a “.net”. So the woman who designed my logo did a few mock ups using the word Phat instead of Fat and I thought it was brilliant and kept it like that.

4 – Since the inception of Reduced Phat, are there any events in the history of the label that you’d consider as particularly relevant, from difficulties and setbacks to successes?

I hate to say this but being a female label owner, has not been easy. I have others in the biz that agree and think it is a total shame, but I guess some men just prefer dealing with other men. In this day and age one would think it would be different. The music industry is not a “Man’s World,” this way of thinking needs to change.

5 – So far what would you consider as special highlights (or successful) releases and artists in the history of Reduced Phat?

I think all my releases are successful. The 2% non-compilation is still selling just as many releases as it did when it came out in 2004 so I would say that is my “best seller” so to speak.

6 – Are there any releases in particular that you would recommend as good ‘introductory material’ to the Reduced Phat label?

They are all different and I would recommend them all. 2% is a good starter with Enduser, Edgey & Subsektor. Stephan James Knight is excellent for the IDM heads or anyone who isn’t heavily into breakcore or jungle music. If you are looking for Vinyl and Jungle/Breakcore then pick up Mathhead and Bong-Ra. I would hope there is something for everyone in the small selection we have so far.

I try not to regret. If you regret something you can never get on with the future. I try to have this point of view for everything in my life. If there was one thing I would change it would be to some how quit my day job to give RP 110%.

8 – An obvious question, but what is Reduced Phat’s ‘relationship’ with the Internet? From promotion tool and digital sales to file sharing and piracy, how has it affected you?

I think the Internet is the best tool around. It networks you with people you would never imagine connecting to. I am not against piracy (waits for the hate mail), I don’t think illegal downloads affect my label at all and I honestly just cannot be bothered bitching about it, there are far more important things to put my time and energy into. We are distributed digitally all over the place (lost count of sites you can find RP on); it has helped us very much. With all the iPods and other MP3 players being used over CD players, it is so much faster to get your music out to the public on a digital download site. The person previewing your music wants it now, not a week later after ordering, it is instant gratification.

Funny you mention this but I am collaborating with a label-mate of mine on a netlabel. I have no concrete details at this time, but I will always post around the net with more information as it is forming. I have drum n bass Djs that are close friends who now use beatport to get some of their beats to spin, so when the hardcore vinyl junkies I know are going digital, you have to step back and assess the situation- that is where this netlabel (that we are putting together) falls into play. Vinyl is always going to be around. I was never a big fan of CDs but I still have a small collection, my music library is mainly digital now. Netlabels have little or no overhead and have a lower risk of losing out on a release they put out, you also cut out the middle man, the manufacturer for your release and get it out that much quicker; I believe it can benefit artists.

10 – Perspectives for the future, what lies in the horizon for Reduced Phat? Can you share some long-term goals and where would you like to see the label heading to?

Right now I have been taking a break this year and trying to figure out what my plan is for Reduced Phat. I hope it continues with much success and I can only take one day at a time, I never set long term goals, only short.

As for labels I would recommend 333 Records, Ad Noiseam and BetaBodega, for the only reason but they release some good stuff! Some of my favorite artists right now are The Gray Kid, Drop the Lime, Krumble the Disco Breaker and Cardopusher, who I believe is the next star so check them out. They are all on the ever so popular MySpace.

Thanks for having me and Steve says hi to everyone.